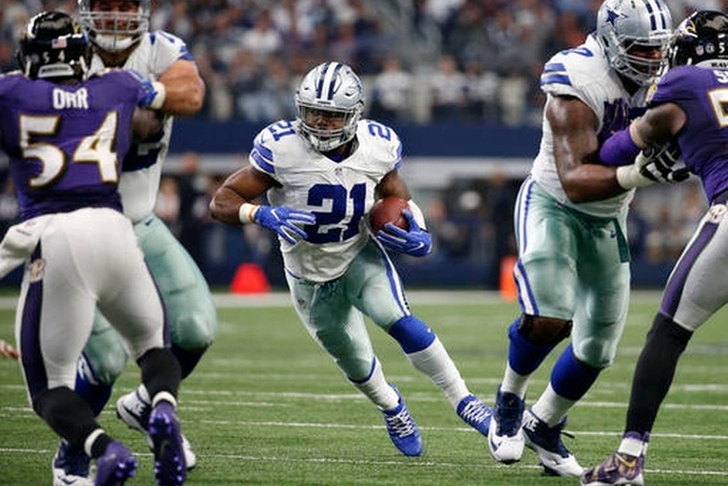 With only a few upsets, Week 11 of the NFL season was more about teams ending or extending streaks to try and get on track for the stretch run. The Cowboys won their ninth-straight game, the Vikings and Steelers snapped four-game losing streaks, and the Giants won their fifth game in a row. So, how do all the other teams stack up against each other going into Week 12? Here's our latest Power Rankings:

1. Dallas Cowboys (9-1)
Dak Prescott has taken the reins of the offense and has this unit playing at a high level. Ezekiel Elliott leads the league in rushing. The defense is playing well. Dallas has virtually no holes in their game - which is why they're the only team with one loss.

2. Seattle Seahawks (7-2-1)
The Seahawks are playing as well as anyone, and with Russell Wilson now healthy, are looking like the Super Bowl favorite we thought they'd be in the preseason.

3. New England Patriots (8-2)
New England bounced back from their loss to the Seahawks with a dominant win over the lowly 49ers. They're still really, really good.

4. Oakland Raiders (8-2)
Oakland technically has the top seed in the AFC over the Pats due to tiebreakers, but I think the Patriots would win head-to-head. The Raiders have been as impressive as you could want them to be.

5. Denver Broncos (7-3)
Denver somehow beat New Orleans after it looked like they blew the game late, but there are still concerns about Trevor Siemian's ability to lead the offense.

6. New York Giants (7-3)
After a 2-3 start, the Giants have reeled off five straight wins and are looking like a real threat to make a run in the playoffs.

7. Kansas City Chiefs (7-3)
Kansas City has won 18 of their last 22 games, but you saw why they're a team that can't be trusted in their loss to the Bucs. KC's offense can get stagnant at any time.

8. Detroit Lions (6-4)
The Lions are for real, though we didn't need to see them beat the Jaguars to know that. They're game against the Vikings on Thanksgiving will determine first place in the NFC North.

9. Washington Redskins (6-3-1)
The Redskins have shaken off an 0-2 start to be in the top half of the league. Can they maintain it? As long as Kirk Cousins continues to play well, they can compete with anyone.

10. Miami Dolphins (6-4)
At 1-4, the Dolphins were left for dead. Now, thanks to the emergence of Jay Ajayi, they have won five straight games. Are they a real playoff contender? They have a very friendly upcoming schedule that will allow them to keep racking up wins.

11. Atlanta Falcons (6-4)
After that blistering 4-1 start, Atlanta is just 2-3 over their last five games. Is this a cause for concern, or can they turn it around?

12. Buffalo Bills (5-5)
Their 0-2 start was bad. Then they won four straight games, which was good. Now, they snapped a three-game losing streak by beating the Bengals on Sunday. This is a seriously streaky team - can they reel off a string of wins for them to get back in the playoff mix?

13. Minnesota Vikings (6-4)
All of the luster from Minnesota's 5-0 start has worn off. Their offense is atrocious, and their defense hasn't been able to consistently carry the load. They may struggle to make the playoffs now - though that will change with a win over Detroit.

14. Philadelphia Eagles (5-5)
Philadelphia continues to be hot and cold, and that's something that will plague them down the stretch with a young team.

15. Houston Texans (6-4)
The Texans struggle against good competition (and that's putting it mildly). However, they are a perfect 5-0 at home.

16. Pittsburgh Steelers (5-5)
Pittsburgh lackluster defense sent them on a four-game losing streak, which they snapped with a win over the Browns. A Thanksgiving game against the Colts will tell us if they've really gotten their season back on track.

17. Baltimore Ravens (5-5)
A road loss to the Cowboys isn't a cause for alarm, but it reinforced what we know about Baltimore. This team's good isn't that good, but they play at a fairly high level on average.

18. Arizona Cardinals (4-5-1)
Arizona's offensive line was exposed in their loss to the Vikings, and this team is facing a major uphill battle to just make the playoffs.

19. Tampa Bay Buccaneers (5-5)
Don't look now, but Tampa Bay has won two straight games and are just a game behind the Falcons for the NFC South lead. If their defense continues to play at the level they did against Kansas City, they could become a serious playoff threat.

20. Indianapolis Colts (5-5)
The Colts were another team left for dead, but have since won two straight games. However, four of their next five games are against the Steelers, Texans, Vikings and Raiders. Can they survive this stretch?

21. Tennessee Titans (5-6)
When Marcus Mariota plays well, Tennessee is capable of playing with anyone in the league. When he doesn't, they can lose to anyone. This team still needs to find consistency.

22. Carolina Panthers (4-6)
Carolina is still alive after winning three of their last four games. Now comes a pivotal showdown against the Raiders in Oakland. A win, and the Panthers can start thinking about really competing for the playoffs. A loss, and they're done.

23. San Diego Chargers (4-6)
The Chargers looked like they had turned it around - then Philip Rivers threw four interceptions in a loss to the Dolphins. They're good, but may be playing nothing more than spoiler now after their bye week last weekend.

24. Green Bay Packers (4-6)
Speaking of what's wrong, we have the Packers. They have lost five of their last six games, largely due to defensive struggles. It really looks like this team won't make the playoffs - and head coach Mike McCarthy might be losing his job.

25. New Orleans Saints (4-6)
Drew Brees will win this team some games, as shown by their four wins record. But the defense is still full of question marks.

26. Los Angeles Rams (4-6)
Jared Goff didn't give the offense the spark they were hoping for, blowing a 10-0 lead in the fourth quarter to lose 14-10 to the Dolphins. Until this offense proves they can improve, this team isn't going anywhere.

27. Cincinnati Bengals (3-6-1)
These Bengals simply aren't the team of the past few years. Their offense can't move the ball consistently, and their defense is like Swiss cheese.

28. New York Jets (3-7)
The Jets are really good when they're good. They're also really bad when they're bad. They've had a difficult schedule so far, but this is BAD.

29. Chicago Bears (2-8)
The Bears are a team in flux undergoing a rebuild, but they have looked worse than expected. Their defense has been gashed every week, and their offense can't put points on the board. With Jay Cutler now out for the season, they have no hope.

30. Jacksonville Jaguars (2-8)
The Jags are dreadful. It's only a matter of time before Gus Bradley gets fired.

31. San Francisco 49ers (1-9)
After San Francisco's surprising win over the Rams, they look like the lackluster team we thought they were, losing nine games in a row. They could be worst team in the league if it wasn't for the Browns.