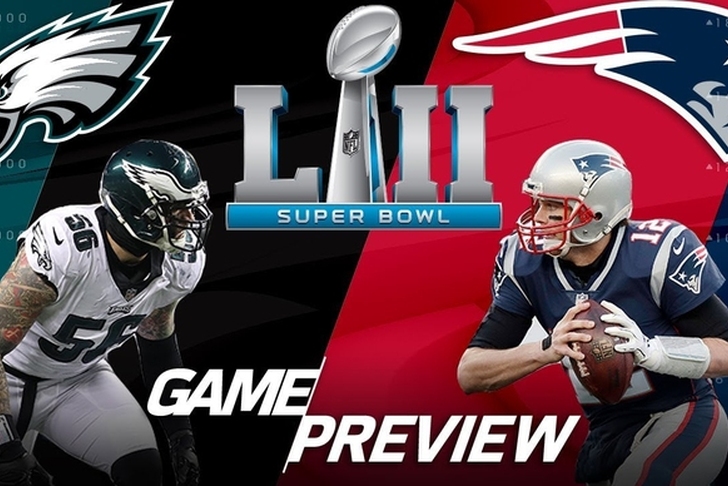 The New England Patriots and the Philadelphia Eagles are ready to battle in Super Bowl LII at 6:30 p.m. ET on Sunday, February 4.

The Eagles, led by backup quarterback Nick Foles, have reached the Super Bowl for the third time in franchise history and are looking to claim their first Super Bowl victory. The Patriots, on the other hand, are playing in the Super Bowl for an NFL record 10th time. Quarterback Tom Brady is trying to cement his legacy as the greatest QB of all time with his eighth Super Bowl appearance and sixth Super Bowl ring.

The Eagles and Patriots met in Super Bowl XXXIX where New England defeated Philadelphia 24-21. It was the Patriots' third Super Bowl victory in four years. Will this year be different?

WHATEVER IT TAKES: This Super Bowl LII Eagles Vs. Patriots Hype Video Will Get You Pumped

Looking at the teams on paper, the Eagles may have a more talented team, but the Patriots have Brady. This is a team sport, however, and it will come down to a solid team effort to get the win. Here's how each team will Super Bowl LII.

The Eagles Win If
The Eagles will need to fluster Brady by getting pressure on him with their front four, which will allow their secondary to drop seven back. If Eagles defensive tackle Fletcher Cox can take this game over by causing pressure on Brady on passing downs and limiting the running backs on the ground, Philadelphia has a chance. The Eagles need to take a page out of the New York Giants' playbook on how to beat Bill Belichick and Brady in a Super Bowl.

The Patriots Win If
The obvious answer to this is if New England's offensive line can protect Brady, but I'll go a little deeper. If the Patriots defense can force the Eagles into no doubt passing situations, this will be a huge factor in this game. The Eagles RPO (run-pass option) has been their strength since Foles took over for the injured Carson Wentz. Forcing the Eagles to become one-dimensional will lead to turnovers for New England, in a game where the Eagles need to play near perfect football to win.

Prediction
Experience is critical in these kinds of games and there is no way I can predict the Patriots losing to the Eagles.If Wentz was healthy, I would consider taking Philadelphia over New England. However, I'm not betting against Brady.  In sports, it's not smart to bet against the greatest of all-time and I'm not going to do it in Super Bowl LII.