Revisiting The Rams-Redskins RG3 Trade: The Deal (Almost) Everyone Lost 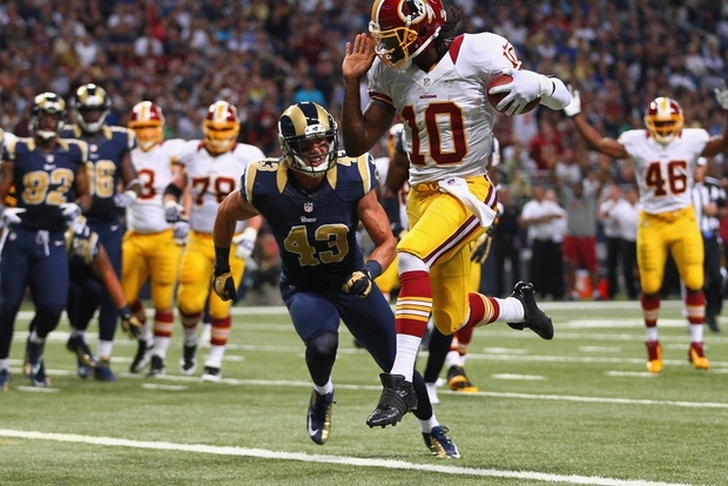 The blockbuster trade between the Washington Redskins and the then-St. Louis Rams for QB Robert Griffin III will go down as one of the biggest lose-lose trades in NFL history. Neither side made the most of the trade, as Griffin ended up busting and the Rams missed on too many of the picks they got in exchange. The Rams have just one player still on the roster from the original deal.

With the Los Angeles Rams trading OT Greg Robinson to the Detroit Lions, that trade is back in the news. It was a lose-lose trade for both teams, but the Redskins and Rams weren't the only ones involved. Multiple teams made trades for picks or players involved in the Redskins-Rams deal and strangely enough, most didn't turn out very well.

Below, we have all the trades connected to that RG3 trade and what ended up happening to the players involved.

This was the original trade details, although the Rams weren't afraid to wheel and deal these picks. Robert Griffin III was the focal point and after his rookie year it looked like a great trade for the Redskins. But he quickly regressed after that, in large part because of injuries. The Redskins are now starting Kirk Cousins, taken later in this same draft. RGIII played for the Browns last year, but is a free agent. He's been a bust. So, the Redskins lost this trade because they gave up a ton for a QB that isn't their franchise option.

As you'll see, the Rams didn't really win the trade either. Jenkins has been great, but the left the Rams for a big money deal with the Giants. Greg Robinson was such a bust he's already been traded to the Lions (more on that here).

Cowboys Get: No. 6 overall pick (CB Morris Claiborne)
Rams Get: No. 14 overall (DT Michael Brockers) and No. 45 overall (traded)

The Rams traded down again in the first round of 2012, picking up a second in the process. Claiborne showed flashes and was actually pretty good in 2016. But he was rarely healthy and left the Cowboys this offseason to join the New York Jets. Brockers has been a solid starter for the Rams, but hasn't been a true impact player. He didn't have a sack last year and has never topped 5.5. Still, he's been a player the Rams can start.

This trade was great for the Bears (until this year) and the terrible for the Rams. Jeffery has been a really good WR in the NFL (when healthy), but the Bears let him leave this offseason. Chicago got the better end of the deal, but with Jeffery gone, are they really winners anymore? The Rams struck out on both picks. Pead's career ended in November after a car crash cost him part of his left leg. While Pead's accident was tragic, he was still a bust. He had just 19 carries for the Rams for 78 yards and caught 14 passes for 94 yards. He also briefly played for the Dolphins, but never scored a TD.  Watkins showed up to camp overweight and never made an impact.

This was the one trade that actually worked out for both sides. Trufant has emerged as a great CB for the Falcons and justified the price the Falcons paid to get him. Ogletree is easily the best player still on the Rams from the RGIII trade and he could thrive in Wade Phillips' scheme. Stedman Bailey is lucky to be alive after getting shot in the head twice in 2015. Unfortunately, he caught only 59 passes for 843 yards and 2 TDs before the injury and hasn't played in an NFL game since then.

This one might be the most complicated of the group. The Rams took that 6th rounder they got from the Falcons and packaged it with their own sixth to add RB Zac Stacy. He had a great 2013, with 973 yards and 7 TDs. He regressed heavily the next year and when the Rams drafted RB Todd Gurley, Stacy requested a trade. The Rams moved him to the Jets for a 7th rounder, which was spent on Baylor LB Bryce Hager. He helps on special teams, but hasn't seen any meaningful defensive snaps. Stacy lasted less than a year with the Jets before getting hurt and electing to retire.

The Texans kept one pick, taking DT Chris Jones, who didn't make the roster and is now with the 49ers. They paired the other with a seventh to trade up with the Raiders to take OT David Quessenberry. The Raiders then ended up with TE Mychal Rivera and DE David Bass. Rivera might be the best of this group and he's on the Jaguars now.

The Robert Griffin trade is basically the Kevin Bacon game of the NFL. Factoring in later trades and signings, nearly half the league has had a player connected to the trade. And somehow, most of the players involved have not lived up to expectations. Especially for the Rams and Redskins, this is likely one of the biggest lose-lose trades in NFL history.

Check out our NFL Page for all the latest NFL rumors or download the Chat Sports App!