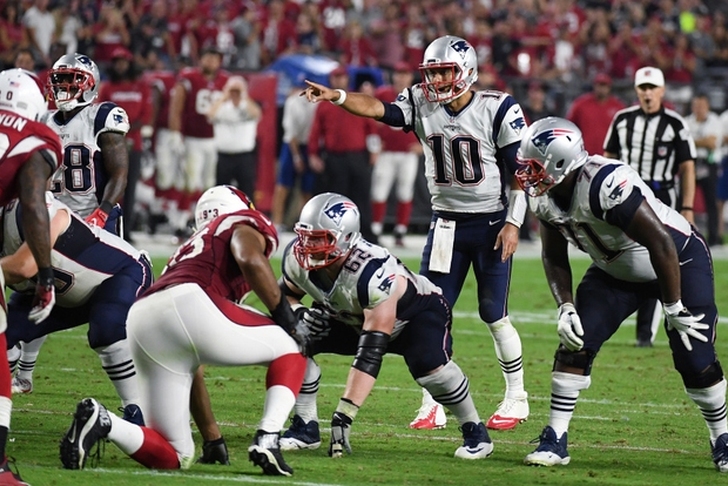 Week 1 of the NFL regular season wrapped up last night, finally giving us our first look at all 32 teams in the league. There were a few surprising results, causing some shakeup in the league's pecking order. Here's how everyone stacks up against each other in our NFL Power Rankings going into Week 2:

1. New England Patriots
New England was easily the most impressive team of the weekend, knocking off the Cardinals in Arizona despite having Jimmy Garoppolo making his first start. They're clearly the team to beat.

2. Pittsburgh Steelers
The Steelers absolutely demolished the Redskins on Monday Night Football - and did so without Le'Veon Bell. The rest of the offense looked in midseason form, and the defense looked scary good. You could easily make the case for them being No. 1 in these rankings.

3. Denver Broncos
Trevor Siemian proved to be adequate under center against a very, very good Panthers team, and Denver's defense is as good as ever.

4. Green Bay Packers
Eddie Lacy is in shape and Jordy Nelson is healthy. As long as those two things stay the same throughout the course of the season, Green Bay will be able to play with - and beat - anyone.

5. Carolina Panthers
Carolina looked good until the offense couldn't move the ball in the second half against the Broncos. That may have had something to do with Denver's defense - or Cam Newton feeling a bit woozy - but we know the talent on this team.

6. Seattle Seahawks
The Seahawks struggled against the Dolphins, but still pulled out the victory. Their defense is great again, limiting Miami to 10 points - it's the offense, who only put up 12.

7. Cincinnati Bengals
The Bengals failed to win a playoff game yet again last season, though we know what they can do in the regular season. They showed that again by beating the Jets.

8. Arizona Cardinals
We know the Cardinals are talented, but man...how do you lose to the Patriots at home with a first time starting quarterback and several new pieces on defense?

9. Kansas City Chiefs
Kansas City is looking to prove that last year's winning streak is no fluke, and they have virtually all of the same pieces in place. They did that by pulling off a 21-point comeback against the Chargers.

10. Minnesota Vikings
Minnesota beat the Titans by two possessions without scoring a single offensive touchdown. They're hopeful that Sam Bradford can fix those problems, but the defense showed they're challenging the Seahawks as the best in the league.

11. Oakland Raiders
Oakland is perhaps the most promising young team in the league, and they showed their upside by beating the Saints in New Orleans. Now they just have to show they can play that well consistently.

12. Houston Texans
Houston's defense should be one of the best in the NFL again, and Brock Osweiler has the offense playing at a good level. The AFC South is Houston's to lose at this point.

13. Tampa Bay Buccaneers
Tampa Bay is another talented young team, and Jameis Winston & Co. flexed their muscle by beating the Falcons on the road. Don't look now, but Tampa is in first place in the NFC South.

14. New York Giants
The Giants showed legitimate signs of life against Dallas, holding the Cowboys to just one touchdown on Sunday. If they can keep that bend-but-don't-break style up, they could win the NFC East.

15. New York Jets
The Jets were one point away from getting a big win against the Bengals, showing this team should compete for a playoff spot again this year.

16. Dallas Cowboys
Dak Prescott looked solid in his debut, but Ezekiel Elliott and the Cowboys surprisingly struggled to move the ball. The defense also played better than expected, giving the Cowboys hope at a resurgence.

17. Jacksonville Jaguars
Jacksonville lost, but they played incredibly well against the Packers at Lambeau Field. They just need to start turning those close losses into wins sooner rather than later.

18. Detroit Lions
No Calvin Johnson, no problem for the Lions. They won a shootout in Indy over the Colts, and while the defense still has questions, Matthew Stafford has the offense playing at a high level.

19. Miami Dolphins
The Dolphins played with more attitude, more discipline and more confidence in Seattle.  However, their offense needs to be more consistent in their ability to move the ball

20. Baltimore Ravens
Injuries killed Baltimore last year, and their defense rebounded nicely, limiting the Bills to just seven points in the Ravens' 13-7 victory. I have concerns about their offense, but their defense can carry them.

21. Washington Redskins
Is Kirk Cousins more than just a one-year wonder? The answer last night was no, and with big defensive questions, the Redskins could be in for a sub-.500 year.

22. San Francisco 49ers
Who expected that, huh? The lowly 49ers put an absolute whipping on the Rams, beating them 28-0. San Francisco's defense looked like the unit that carried them to the Super Bowl, and Chip Kelly was able to get the most out of Blaine Gabbert and the offense. They probably won't be able to keep up that level of play, but their performance showed they're better than we thought they'd be.

23. Buffalo Bills
Buffalo has a lot of talent, but something just feels off. They need to get better rushing the passer and more consistency from Tyrod Taylor for them to accomplish their goal of making the postseason - which looks like an extreme long shot.

24. Indianapolis Colts
Andrew Luck can make up for a lot of things, but the Colts' overall lack of talent has become blatantly obvious.

26. Tennessee Titans
Tennessee needs to see growth from Marcus Mariota in Year 2, but the rest of their roster (outside of running back) leaves much to be desired. The offense also has to stop turning the ball over.

27. Philadelphia Eagles
The Eagles gave up a lot of players to draft Carson Wentz, and he made that look a very smart decision in leading them to a victory over the Browns. Until the beat other than the Browns, there's a limit to how much credit we'll give them.

28. Atlanta Falcons
Atlanta can't stop anyone and the offense is just average. Not a lot to be excited about with the Falcons.

29. Chicago Bears
The Bears are a team in flux undergoing a rebuild, but they looked worse than expected. Houston was able to gash their defense at every turn, while the offense looked stagnant at times.

30. San Diego Chargers
Being up 21 points on a division rival is nice, yet they somehow lost game - and their top receiver in Keenan Allen.

31. Los Angeles Rams
LA gave up 28 points to a team starting Blaine Gabbert at cornerback and were the only team to be shutout on opening weekend. Yuck.

32. Cleveland Browns
Oh, Cleveland. They clearly have the worst roster in the league, and they lost their starting quarterback in Robert Griffin III. It's gonna be another long season for the Browns.