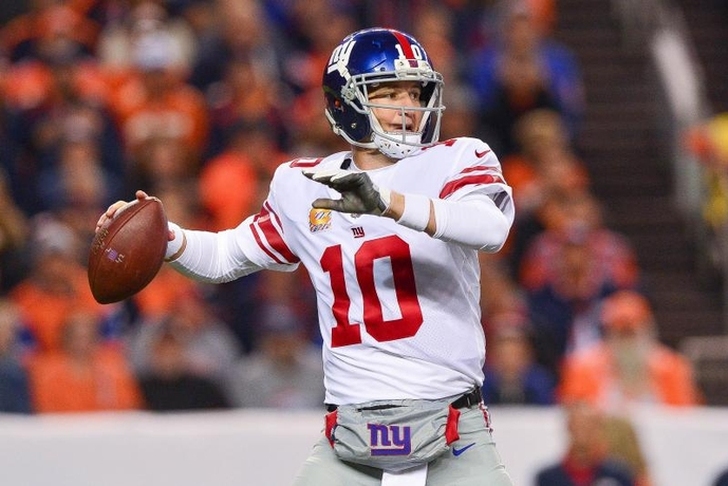 The NFL trade deadline is fast approaching on Oct. 31 at 4:00  pm ET, yet we've already seen a major trade happen with Adrian Peterson moving from the New Orleans Saints to the Arizona Cardinals. We rarely see true blockbuster trades in the league, but rumors are swirling about the future of several stars. Here are all the latest news & rumors you need to know:

Eli Manning hears rumors, wants to stay with Giants
Following an 0-5 start to the season, there have been rumors that the New York Giants may look to trade quarterback Eli Manning and draft a quarterback with a top pick. Many have linked Manning to the Jacksonville Jaguars and Green Bay Packers as possible suitors, but Manning isn't having any of it.

“Yeah, I don’t know why all of a sudden that’s started up,’’ Manning said this week on WFAN. “Why people think I would leave or want to leave or the Giants want to trade me. I don’t get caught up in [rumors], I don’t think about ’em, I got one job and that’s playing quarterback for the New York Giants.’’

Manning, who has spent his entire 14-year career with the Giants, has passed for 1,466 yards with nine touchdowns and five interceptions so far this season.

"No, I'm good, man," he told reporters. "Good to go. Play ball, play this year out strong, finish strong and move forward. ... I just got to enjoy what I'm doing here, focus on the now. I'm in Pittsburgh, I'm playing here and that's all I can focus on."

Several of his teammates said they "died laughing" at the report because they knew it wasn't true.

We all died laughing on the plane, like it was funny as hell," center Maurkice Pouncey said, via the Pittsburgh Tribune-Review. "Come on. Everybody wants the Steelers to have a story."

"I have talked to him," quarterback Ben Roethlisberger told 93.7 FM. "He doesn't want to go anywhere. Sometimes things come from agents because they want what they think is the best for the player and don't realize that it ends up hurting the player. I don't know exactly what happened here, but what I do know is there hasn't been any inklings of unhappiness. It's unnecessary drama."

Bryant is currently Pittsburgh's second-leading receiver in terms of yards but is only fourth in receptions. Rookie second-round pick JuJu Smith-Schuster has seen his role in the offense increase, which has limited Bryant's targets.

49ers not trying to trade Carlos Hyde
The San Francisco 49ers were reportedly fielding offers for running back Carlos Hyde, but head coach Kyle Shanahan came out and flatly denied that.

"That is absolutely, absolutely 100 percent false," Shanahan said. "There is nothing true about that."

Rookie running back Matt Breida played more snaps than Hyde two weeks ago, leading to speculation that the team would trade him like they tried to trade NaVorro Bowman before releasing him. However, that doesn't appear to be the case at this time.

Hyde has rushed for 360 yards and four touchdowns on 86 carries so far this season.