NFL Rumors: Who Are The 7 Best Wide Receivers in the NFL? 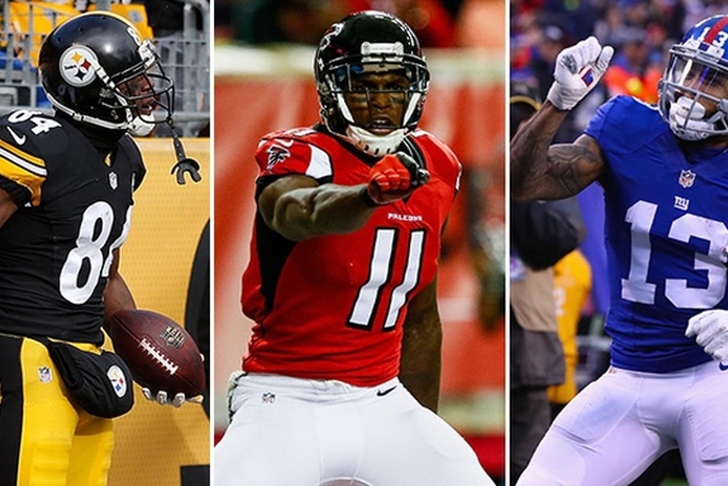 Who are the Top 7 WRs in the NFL? #NFL pic.twitter.com/TJLEa2v62w

There have been a few weigh-ins on twitter but now it's time to give you my top seven wide receivers. When I ranked these wide receivers I based it on this season, past seasons, and physical abilities.

7.) DeAndre Hopkins - Houston Texans
This is the fourth year for Hopkins and he has had some up and down years but that isn't his fault. He is just two years removed from 1,521 yards and 11 touchdowns. This season he leads the league in targets and receptions. A tall physical receiver with great hands. Hopkins makes the list.

6.) Jordy Nelson - Green Bay Packers
Jordy is 32 years old and still getting it done. He led the NFL in touchdowns last season with 14 and currently leads the NFL in receiving touchdowns this season with five. People may dispute this one because he has Aaron Rodgers as his quarterback but Rodgers has shown that he struggles without Nelson.

You May Also Like: Ty Montgomery Injury Update and Aaron Jones Fantasy Advice

5.)  A.J. Green - Cincinnati Bengals
Green was having a great season last year before he got injured. He was averaging 96 receiving yards a game. Last season was the first year in his career where he didn't have over 1,000 receiving yards. He had 964 in 10 games. Green is having a sneaky good season which is saying a lot considering how bad the Bengals have been.

4.) Mike Evans - Tampa Bay Buccaneers
At 6'5" 231 pounds, he is one of the most physically gifted players in the NFL. He dominates in the red zone and picking up first downs. He has two seasons with 12 touchdowns and he led the entire NFL in first down catches last season with 81.  A player only in his fourth year who has an incredible ceiling.

3.) Odell Beckham Jr. - New York Giants
The top three can be debated for sure. No wide receiver has had a better start to their career in NFL history, than Beckham. He has had at least  90 catches, 1,300 yards and 10 in his first three seasons. An elite athlete who is also an incredible route runner with hands to match. His only weakness is himself and he lets defenders get into his head. He isn't having that great of a season this year but that isn't his fault.

2.) Julio Jones - Atlanta Falcons
The most physically gifted wide receiver in the league is Julio Jones. At 6'3" and 220 pounds his size-speed combination is in the 99th percentile. Julio would be number one on my list but he deals with injuries more frequently than the guy at number one. He is the only player in NFL history to average over 100 receiving yards a game throughout his career. For some reason the Falcons have never used him in the red zone which hurts his numbers but when you create a wide receiver on Madden. You basically create Julio Jones.

1.) Antonio Brown - Pittsburgh Steelers
There has not been a more consistent player at the wide receiver position over the last three years than Antonio Brown. Three straight years with over 100 catches, 1,250 yards, and 10 touchdowns, he is the only player with that stat line. He has a season with 136 catches and this season he is on pace for 120 catches, 1,552 yards. The Steelers offense hasn't even started to play well yet either. Just a complete receiver who shows up every week and year. This is why Brown is the best wide receiver in the NFL.