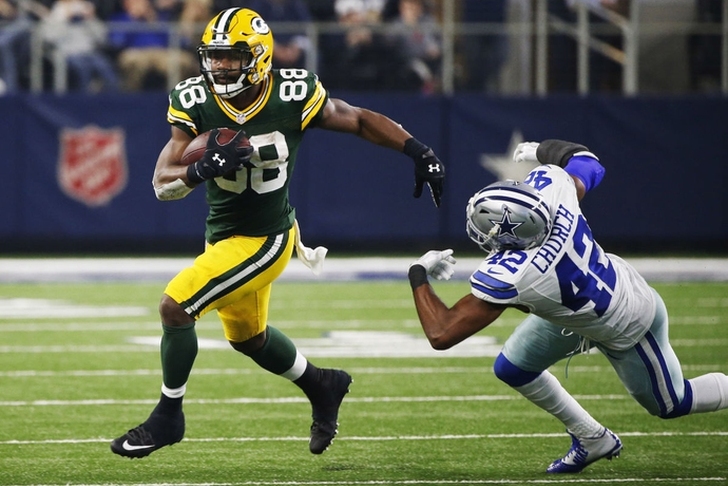 Arguably the most frequent question I have been getting on Twitter this week @MitchellRenz365. Please let me know who you think is going to start for the Green Bay Packers at running back against the Dallas Cowboys.

Who will Start for the Packers at RB this week against the Cowboys? #GoPackGo #FantasyFootball #GBvsDAL

If it is Aaron Jones instead of Ty Montgomery how will this impact the game? The Packers are dealing with a ton of injuries but the one that we will focus on is at the running back position. This is a big game and both running backs have the ability to catch the ball so depending on how the game script goes this could impact what kind of stats each player contributes.

Who win the #GBvsDAL game this Sunday? #DallasCowboys #GoPackGo

Ty Montgomery is dealing with a few broken ribs but is considering wearing a flak jacket and suiting up and playing. Montgomery suffered the rib injury last week against the Chicago Bears. Luckily Montgomery was given 10 days of rest since their game last week as on Thursday but it is still a coin flip whether or not he will play. If you enjoy fantasy football rumors or big-time news like this article then you will love the podcast below. Guarantee Five Stars!

If Montgomery is unable to play look for the Packers to lean on rookie running backs Aaron Jones and Jamaal Williams. Williams is also dealing with an injury and the running back out of BYU simply hasn't looked very good this season. Aaron Jones, on the other hand, has looked good and may be the favorite to take over the backfield if Montgomery is inactive.

Jones this past week was given 12 carries for 49 yards and one touchdown. Jones had some offseason hype as being electric and from what I saw on tape he shows glimpses of being explosive. The rookie running back out of UTEP could have himself a great game if given the start. The Cowboys just gave up 215 total yards and a touchdown to Gurley last week. Now I'm not saying he is Todd Gurley but I wouldn't be upset with half of that production. It is possible considering how Aaron Rodgers carves up the Cowboys defense. Over his last five games including the playoffs, he has 1,472 yards, 11 touchdowns, and one interception. That's pretty good.

Reading between the lines and trusting my gut, I would sit Ty Montgomery and start Aaron Jones. I don't think it would be smart for Montgomery to play risk a more serious injury internally. The Packers should play Jones and give him the rock. Jones if the starter is an RB2 in all formats.