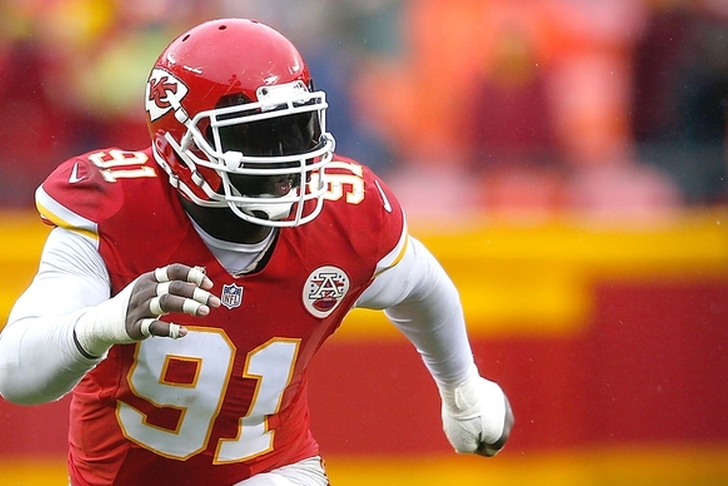 The NFL offseason is nearly over, as training camps get underway. That means the rumor mill will start to heat up again and there's already one notable player expressing some unhappiness. Here are all the latest NFL rumors you need to know.

Tamba Hali Is Upset
The Kansas City Chiefs LB Tamba Hali has long been viewed as a team-first player. But, today has been a little bit different, as Hali has gone on a long Twitter rant in which he questions whether the Chiefs want him anymore.

watching both Steelers game from sideline and playing 15 and 7 in the last game I'm still lost. Am I needed in KC anymore?

I haven't missed any off-season workouts in 11 years w/the Chiefs. I've played in every game except four in my 11 year career with Chiefs.

No I'm not high or drunk I just want to play more football.

So people are curious if I'm holding out or got cut. No to both. I want to play more.

Tamba also lashed out at ESPN beat writer Adam Teicher after Teicher said Hali wouldn't get more playing time. Hali might be 33 years old, but he's still a key contributor. Dee Ford has taken some of Hali snaps across from Justin Houston, but Hali still recorded 3.5 sacks and 34 tackles while starting only two games last year.

Hali will still show up to training camp (there's no holdout) and he's not going anywhere this year either. Unless the Chiefs find a trade, they won't save much by cutting Hali. And given the need in the NFL for pass rushers, why would they want to?

Cowboys Looking At RBs
The Dallas Cowboys still aren't sure what's going to happen with Ezekiel Elliott to start the season and with Lance Dunbar with the Los Angeles Rams, the Cowboys are at kicking the tires on other running backs. The Cowboys worked out both Ronnie Hillman and Denard Robinson, but won't sign either.

Told the Cowboys aren't planning on signing either Denard Robinson or Ronnie Hillman at this time.

Robinson or Hillman could help replace Dunbar as the team's third down back. Robinson was mostly relegated to the bench for most of the season last year. Hillman played limited snaps for the Vikings and Chargers after getting cut by the Broncos. The Cowboys have Elliott, Darren McFadden and Alfred Morris as the notable RBs on the roster.

After reporting to #JaxCamp17 on Friday, CBs Aaron Colvin & Jalen Ramsey have been designated as Active/Physically Unable to Perform. pic.twitter.com/ZDc5DHYpMv

It's nothing to panic or be concerned about, however. Ramsey underwent core muscle surgery (aka sports hernia) in June and wasn't expected to be ready to go out. However, he is expected to be ready for the start of the season. Colvin, who has battled injuries in the past, is dealing with a foot injury.