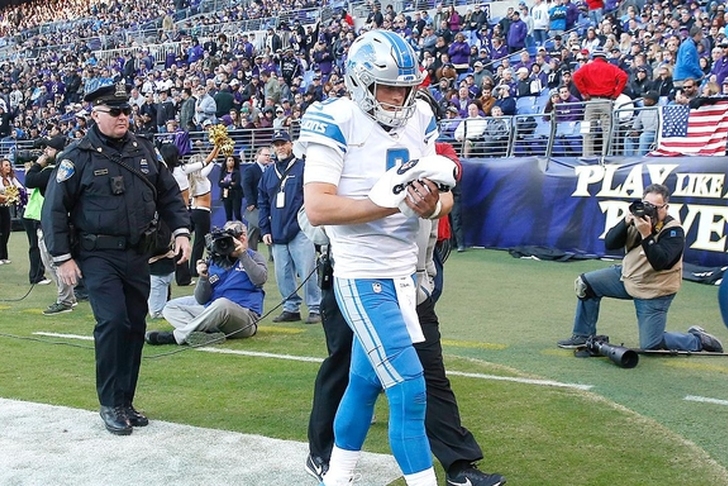 NFL Week 14 will begin Thursday when the New Orleans Saints travel to Atlanta to play the Falcons. The week started with a big bang when Ben McAdoo was fired following the Giants' loss to the Raiders and benching of quarterback Eli Manning. However, there are plenty of other quarterbacks who find themselves in the headlines on Wednesday, including Matt Stafford and Tyrod Taylor. Here are all the latest NFL rumors and injury updates you need to know.

Matthew Stafford Questionable for Week 14
Detriot Lions quarterback Matthew Stafford was forced to leave Sunday's game against the Ravens with an injury to his throwing hand, and Lions coach Jim Caldwell confirmed on Monday that Stafford did not break his hand. Today, Caldwell was a little more cautious, saying that Stafford's injury is "not insignificant," and he's "not out of the woods, yet."

Caldwell: Stafford “not out of the woods yet” in terms of that right hand injury suffered last week in Baltimore

Even though Stafford didn't break his hand, his status for Sunday's game is in serious question. If he is unable to play, backup Jake Rudock would be the starter.

Adrian Peterson Won't Practice Wednesday
Arizona Cardinals running back Adrian Peterson was forced to miss Sunday's game against the Rams due to a neck injury, and the injury will keep him out of practice again Wednesday, according to head coach Bruce Arians.

.@AZCardinals coach Bruce Arians said @AdrianPeterson won't practice today because of a neck injury. Will he play vs @Titans? "We'll wait and see. He is not going to practice today and we're still waiting on he and the doctors to clear him."
-AP missed Sunday's game vs Rams.

If Peterson can't go, expect backup running back Kerwynn Williams to get another start. He played well last week in the role, rushing for 97 yards on 16 carries last week.

Tyrod Taylor Not Practicing Wednesday
Buffalo Bills quarterback Tyrod Taylor was carted off with a knee injury in Sunday's loss to the Patriots. He avoided ligament damage but is dealing with a patellar tendon contusion, so it isn't a big surprise he isn't practicing on Wednesday. Head coach Sean McDermott said on Wednesday there's no timetable for Taylor's return yet.

#Bills QB Tyrod Taylor will not practice today with a knee contusion. Sean McDermott says there's no timetable for if/when Taylor practices or what that means for him playing on Sunday. pic.twitter.com/aTgqEqPGes

McDermott has already said that Taylor will remain the starter "when healthy." The Bills will issue their first injury report today, which will provide an update on Taylor's status for Sunday against the Colts.