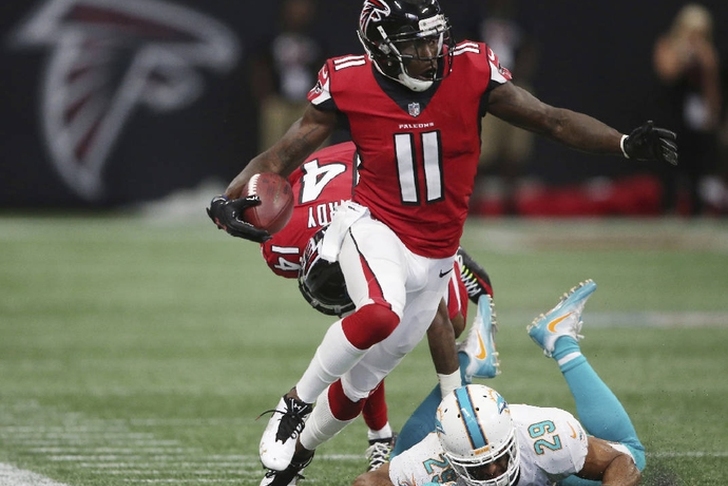 The NFL offseason rolls with many voluntary OTAs opening this week, marking the first time many players have returned to the field since last season ended. As such, there are plenty of rumors to sort through from around the league. Here's the latest you need to know:

Julio Jones isn't expected to be in attendance for Atlanta's organized team activities on Monday, and it's not a big deal -- or is it?

Jones, a wideout who has posted four straight seasons of at least 1,400 receiving yards, wants an update to his contract, which is scheduled to pay him $10.5 million in 2018, Rapoport reported. The star receiver sat down in 2015 to sign his deal, which is a somewhat backloaded contract with his largest single base salary coming in the second-to-last year of the pact (2019) at $12.5 million. Jones' average annual salary ($14.25 million) places him eighth in the league at the position, behind Antonio Brown, Mike Evans, DeAndre Hopkins, Sammy Watkins, Jarvis Landry, A.J. Green and Davante Adams (per Over The Cap). That list alone proves his deal has become outdated.

"When you really look at it, it doesn't make sense for Jason Garrett to continue to have his job," Terrell Owens said on 105.3 The Fan in Dallas. "They are not really expanding or progressing even as a team under his coaching tenure there."

"At the end of the day, how can you keep allowing the players to be the scapegoat for what's not happening," Owens said, "especially when you have a head coach that's supposed to be offensive-minded? They're supposed to direct and lead the team to where a team hasn't gotten in a number of years, and they've pretty much been in a standstill under coach Jason Garrett."

Garrett is 67-53 in eight seasons as Dallas' head coach but has only made the playoffs twice with just one postseason win.

Josh Rosen impresses Cardinals
Arizona Cardinals rookie quarterback Josh Rosen got a majority of first-team reps on the team's first day of voluntary OTAs due to Sam Bradford having the day off and Mike Glennon battling the stomach bug, and new head coach Steve Wilks said the team was impressed with what they saw from the No. 10 overall pick.

"Josh looked great today," Wilks said. "Some of his timing and his throws with the quarterback and tight ends I thought were right on point."

"He was good," Pugh said. "I was surprised at how well he did with the limited amount of time that he's spent here so far. The first thing I told him was, 'Take command of the huddle. This is your huddle.' He did a good job. I was impressed with what he did today."

Rosen passed for 3,756 yards with 26 touchdowns and 10 interceptions in 11 games for UCLA last season.