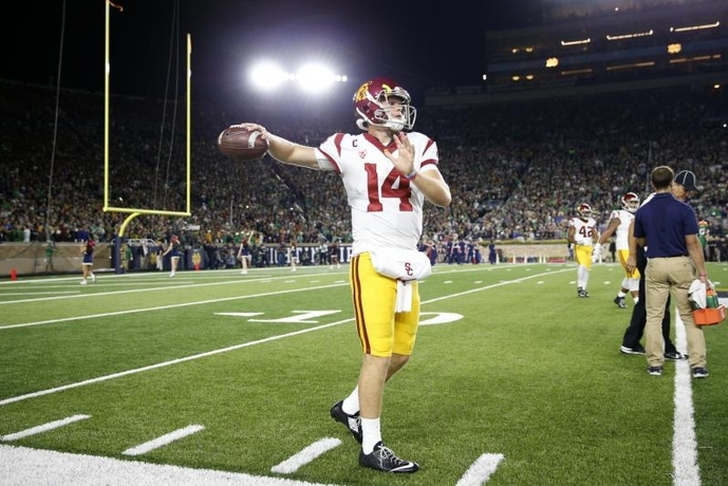 Week 9 of the NFL regular season kicks off tonight with the New York Jets hosting the Buffalo Bills on Thursday Night Football, setting the stage for a thrilling weekend. We have the latest on some key injuries, as well as an update on possible game-changing news at the top of the 2018 NFL Draft. Here are all the latest news & rumors you need to know:

Sam Darnold may stay at USC if certain teams get top pick
USC quarterback Sam Darnold is widely expected to be the No. 1 overall pick in the upcoming draft, but he plans to wait and see who gets that pick before deciding if he will enter the draft or not, according to NFL.com's Albert Breer.

.@AlbertBreer on @BullandFox: USC QB Sam Darnold is "going to take everything into account and that includes who's at the top of the draft"

Breer didn't name any specific teams that Darnold wants to avoid, but there is a report that he does not want to be drafted by the Cleveland Browns. Darnold has thrown for 2,558 yards with 20 touchdowns and 10 interceptions in nine games this season while rushing for three more scores.

Browns ownership went "nuclear" on front office following failed trade
Speaking of the Browns, they may not have needed to draft a quarterback early if they had been able to trade for Cincinnati Bengals quarterback A.J. McCarron at the deadline. Cleveland and Cincinnati had agreed in principle to the deal, but the Browns forgot to finalize it in time, meaning the deal didn't happen.

According to ProFootballTalk's Mike Florio, Browns ownership went "nuclear" on the front office about the failed trade.

Per a league source, ownership (specifically Dee Haslam) went “nuclear” on the front office in the aftermath of the failed effort to consummate a trade for Bengals quarterback A.J. McCarron.

The reaction comes even as the Browns spent much of Wednesday trying to persuade multiple media members that the Browns didn’t screw up the trade that was indeed screwed up. The Browns contend that they signed the appropriate paperwork to reflect their agreement to the deal, that they sent it to the Bengals for signature and submission to the league office, that the Bengals sent documentation signed only by the team, and that by the time the error was detected it was too late to rectify it.

Zach Ertz dealing with hamstring injury
Philadelphia Eagles tight end Zach Ertz was listed on the injury report on Thursday with a hamstring injury that could impact him on the field this weekend. We will learn more about his availability on Friday when the team will make his injury designation.

Philadelphia will host the Denver Broncos on Sunday. Ertz has 43 catches for 528 yards and six touchdowns so far this season.