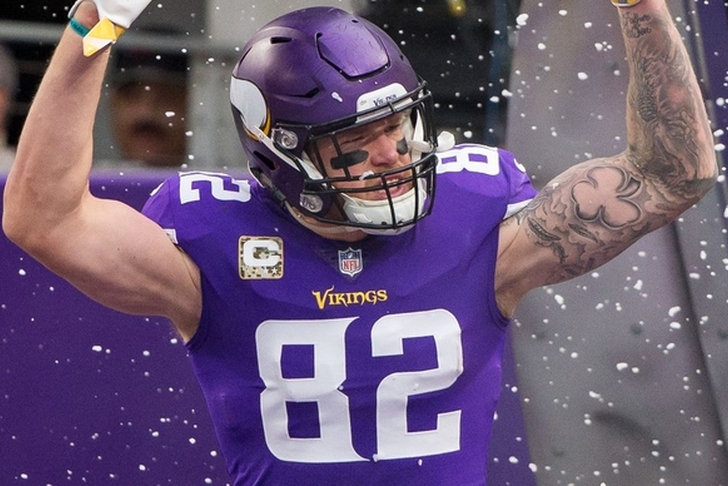 16.) Kansas City Chiefs (6-5)
Last Week: 10
The Chiefs have now lost five of their last six games. They are who we thought they were.

15.) Baltimore Ravens (6-5)
Last Week: 16
The Ravens continue to win despite the horrible play of Joe Flacco. The Ravens top five defense is the reason this team has six wins and isn't a team with less than three wins.

13.) Los Angeles Chargers (5-6)
Last Week: 18
Don't look now but the Chargers have won five of their last seven games and are only one game out of first place in that division. Philip Rivers is playing great and this defense is one of the most underrated defenses in the league.

12.) Detroit Lions (6-5)
Last Week: 13
The Lions played the Vikings tough but couldn't hang with them for four quarters and just came up short. Stafford continues to struggle against winning teams in his career.

11.) Tennessee Titans (7-4)
Last Week: 12
Can't believe the Titans have seven wins, they easily could be 4-7 if you ask me but they have benefitted from an easy schedule. I do always good teams find a way to win but I think the teams they are playing are finding a way to lose.

10.) Jacksonville Jaguars (7-4)
Last Week: 7
A very disappointing game from the Jaguars losing to a far less talented team the Arizona Cardinals. If the Jaguars want to be taken seriously they need to start winning these types of games. Credit to Bortles for rushing for 62 yards and two touchdowns and keeping the Jags in the game.

9.) Seattle Seahawks (7-4)
Last Week: 9
The Seattle Russell Wilson's got a win over the 49ers on the road 24-13. Wilson scored three touchdowns in this one and now has accounted for 86 percent of the Seahawks offense. No player has done more for his team than Wilson has done and deserves to be an MVP candidate.

8.) Atlanta Falcons (7-4)
Last Week: 11
Are the Falcons back? They have won three games in a row and the offense has scored over 27 points in their last three games. Hard to believe when you get the ball into Julio Jones' hands good things happen. Tevin Coleman continues to run well while Freeman is out which allows them to rest their franchise running back as he recovers from a concussion.

7. Carolina Panthers (8-3)
Last Week: 8
The Panthers barely scratch out a win against a sneaky Jets team. Cam Newton didn't play well but he didn't throw an interception which seems to be a recipe for a Panthers win because in  their three losses this season Newton has eight interceptions.

6.) New Orleans Saints (8-3)
Last Week: 4
Their eight-game win streak was snapped on the road against the Rams. The Saints were without Marshon Lattimore which hurt the Saints defense. Even though they lost I think the Saints should still feel good because with a fully healthy roster, I think they beat the Rams. Also Alvin Kamara for Rookie of the Year, there I said it.

5.) Los Angeles Rams (8-3)
Last Week: 6
A huge win for the Rams against a Saints team that was coming into this game with eight straight wins. The defense stepped up huge slowing down Brees and this great Saints offense.

4.) Pittsburgh Steelers (9-2)
Last Week: 5
A close call for the Steelers against a far less superior team in the Packers but luckily they have the best wide receiver in the NFL Antonio Brown who stepped up huge when it mattered the most. This Steelers team is hard to judge because they can look so dominant some weeks and then they look like a team who shouldn't make the playoffs.

3.) Minnesota Vikings (9-2)
Last Week: 3
The Vikings are for real, and this team deserves respect. Case Keenum is playing great and Mike Zimmer deserves to be Coach of the Year with the work he has done with this team despite all the injuries on offense.

2.) New England Patriots (9-2)
Last Week: 2
The Patriots drop 35 on the Dolphins and Brady threw for four touchdowns on only 18 completions. This defense has been playing much better not allowing more than 17 points in their last six games. They could easily be 1B in our Power Rankings.

1.) Philadelphia Eagles (10-1)
Last Week: 1
Which means the Eagles would be 1A  in our Power Rankings and after a dominant 31-3 victory against the Bears they totally deserve to be number one. Carson Wentz leads the NFL in touchdowns with 28 and is leading this Eagles team to the best record in the NFL. Wentz for MVP.