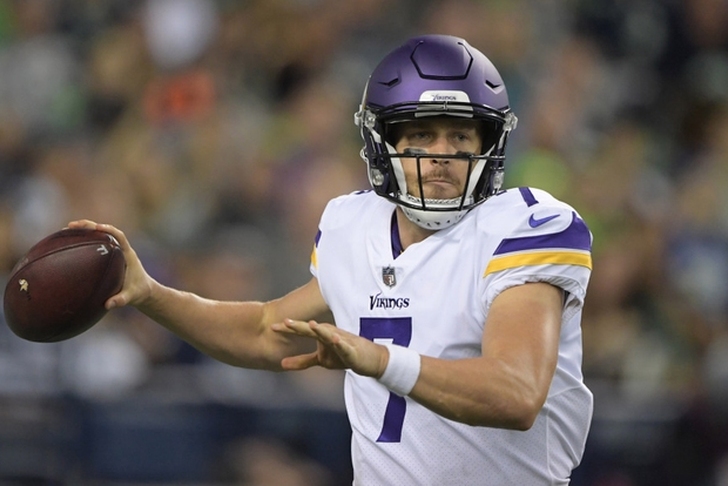 The NFL is confusing and proves us every week that any team can win. Also, our viewers on our NFL Daily Show on Facebook Live tell us every week how crazy our rankings are so if you think you're smarter than our experts, let us hear it.

32.) Cleveland Browns (0-11)
Last Week: 32
The Browns under Hue Jackson are 1-26 which of course isn't good but maybe with a healthy Corey Coleman and the return of Josh Gordon they can win a game this year, maybe?

31.) New York Giants (2-9)
Last Week: 31
An ugly late game on Thanksgiving that hopefully didn't make families sick watching it. The Giants continue to struggle on offense but at least their defense has been playing better the last two weeks.

30.) San Francisco 49ers (1-10)
Last Week: 30
The 49ers lost at home to the Seahawks 24-13 but I think the future is brighter for the Niners because of a possible quarterback change Jimmy Garopollo.

29.) Indianapolis Colts (3-8)
Last Week: 29
The Colts should have beaten the Titans but gave away a lead late in the game. This Colts team hasn't given up yet which I give them a lot of credit for but they need to start looking at next year and beyond.

28.) Denver Broncos (3-8)
Last Week: 28
The Broncos haven't won a game since October 1st and their quarterback play is a Merry-go-round at a carnival and Paxton Lynch with the facial hair is the creepy guy checking to see if you are tall enough to ride this ride.

27.) Chicago Bears (3-8)
Last Week: 27
The Bears have been playing teams tough this season so losing to arguably the best team in the NFL 31-3 is surprising a little but I think it's more of a testament of how good the Eagles are.

26.) Miami Dolphins (4-7)
Last Week: 26
Wow, what a horrible game from the Dolphins, luckily the center for the Patriots snapped the ball before anybody on the team knew it and it led to an easy touchdown.

25.) Tampa Bay Buccaneers (4-7)
Last Week: 24
The Buccaneers scouting report next time they play the Falcons should be to cover Julio Jones better or just wide receivers in general.

24.) Houston Texans (4-7)
Last Week: 21
The Texans will be without Lamar Miller for a few weeks with a knee injury but this is a lost season since Deshaun Watson went down with an injury. DeAndre Hopkins continues to play well and if you ask him, he would say that he is the best wide receiver in the NFL.

23.) New York Jets (4-7)
Last Week: 22
The Jets played the Panthers tough and had a chance to win this game but a late turnover that led to a Panthers touchdown totally flipped the momentum of this game. Robby Anderson is starting to emerge as one of the best deep threats in the NFL with Josh McCown.

22.) Green Bay Packers (5-5)
Last Week: 20
The Packers deserve some credit for playing the Steelers tough at home and only losing 31-28. Brett Hundley played much better and I've been saying it for weeks, Devante Adams is the best wide receiver on that team, period.

21.) Cincinnati Bengals (5-6)
Last Week: 23
Joe Mixon gets a heavy workload and Andy Dalton continues to dominate against the Browns. In his last five games against the Brown, he has 15 touchdowns and zero interceptions.

20.) Arizona Cardinals (5-6)
Last Week: 25
The Cardinals beat a good Jaguars team at home 27-24 and Blaine Gabbert got a needed revenge game against his old team.

19.) Oakland Raiders (5-6)
Last Week: 19
The Raiders won and got their first interception on the season against Paxton Lynch and the circus that is the Broncos.

18.) Dallas Cowboys (5-6)
Last Week: 13
The Cowboys have scored 20 points in their last three games combined and Dak Prescott has more interceptions in his last two games than he did all last season. They can't score and can't stop teams from scoring on defense. You could argue they have been the worst team in football the last three weeks.

17.) Washington Redskins (5-6)
Last Week: 15
The Redskins win an ugly game on Thanksgiving and move to five wins on the season. Kirk Cousins continues to play well despite him losing every offensive option on his team.