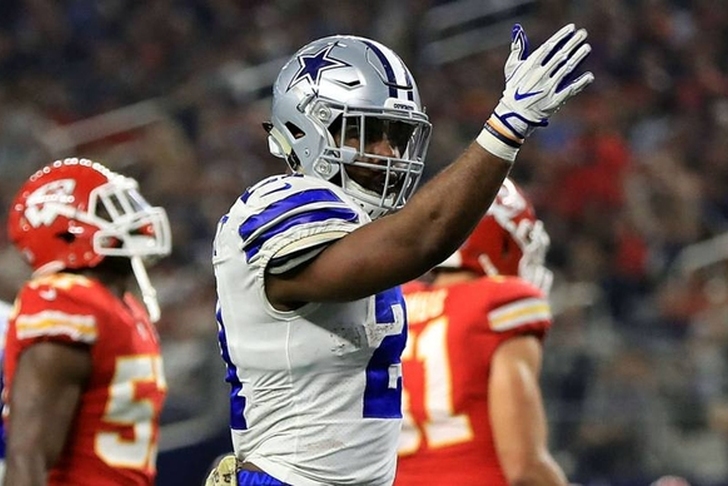 16.) Oakland Raiders (4-5)
Last Week: 22
The Raiders went with a more balanced attack on offense and got Marshawn Lynch into the end zone twice. Even though the Raiders won, they still have plenty of issues on offense like catching the ball. Man, how many balls did this team drop this past week? If they want to be a great team, they need to start doing the little things better.

15.) Atlanta Falcons (4-4)
Last Week: 13
I love Julio Jones but man that was a bad drop and if he catches that ball, I think the Falcons win the game. Matt Ryan and the offense looked better in general so maybe the grass will be greener for the Falcons offense the second half of the season.

14.) Tennessee Titans (5-3)
Last Week: 16
The Titans might be the worst five-win team in the NFL. Their offense hasn't taken the leap like we were hoping and their defense is a bottom 10 defense in the league.

13.) Washington Redskins (4-4)
Last Week: 15
I'm a believer in the Redskins. They have lost too tough teams and after going into Seattle and winning this team needs to be taken more seriously. What a great comeback by Kirk Cousins and this team with limited players on offense due to injuries

12.) Buffalo Bills (5-3)
Last Week: 9
Just when we think the Bills are for real they get embarrassed by the Jets on Thursday Night Football. What happened to the defense? Where did it go?

11.) Seattle Seahawks (5-3)
Last Week: 6
I wish the Seahawks would play the way they do in the fourth quarter for the entire game. Let Russell Wilson win you a game, quit running the ball with your running backs. Wilson is one of the best quarterbacks in the league and needs the ball in his hands more.

10.) Jacksonville Jaguars (5-3)
Last Week: 11
No Leonard Fournette, no problem for the Jaguars. Chris Ivory and TJ Yeldon were enough to get by and this defense continues to be one of the scariest defenses in the league.

9. Carolina Panthers (6-3)
Last Week: 12
Playing tough defense is the recipe for success for the Panthers. When the Panthers try and be physical they win games.

8.) Kansas City Chiefs (6-3)
Last Week: 4
The Chiefs have now lost three of there last four games. Have teams figured out the Chiefs? Has the NFL figured out Kareem Hunt? Questions the Chiefs need to start asking because they are headed in the wrong direction. Luckily they have a bye to figure their issues out.

7.) Dallas Cowboys (5-3)
Last Week: 10
The Cowboys with Ezekiel Elliott is one team of the best teams in the NFL. The Cowboys have been rolling and have won three games in a row. The question still remains, will Zeke get suspended and if he is on the field I'm picking them to win right now.

6.) Los Angeles Rams (6-2)
Last Week: 8
The Rams dropped 51 points. What a total flip from last year. Jared Goff looks great and Todd Gurley right now is the best running in the NFL. Sean McVay for coach of the year.

5.) Minnesota Vikings (6-2)
Last Week: 5
The Vikings were on a bye in Week 9 so they had an extra week to prepare for a Redskins team coming off a huge win. The other coach who should win be in consideration for coach of the year is Mike Zimmer. How many teams lose so many key players for parts of the season and still have a 6-2 record?

4.) New Orleans Saints (6-2)
Last Week: 7
Six wins in a row. They are playing defense and continue to have complete balance on offense. Alvin Kamara is emerging as a star and this team is winning games without Brees throwing for over 300 yards. Excited to see what this team can do.

3.) Pittsburgh Steelers (6-2)
Last Week: 3
The Steelers had a bye and are on the road against the Colts in Week 10. They need to continue to lean on Le'Veon Bell because when the offense runs through him, the Steelers runs through teams.

2.) New England Patriots (6-2)
Last Week: 2
The Patriots are coming off a bye and get a struggling Broncos team. When Brady gets an extra week to prep that is never a good thing for the opposing defense.

1.) Philadelphia Eagles (8-1)
Last Week: 1
The Eagles conintue to fly high as they have the best record in the NFL and should be number one on everyones Power Rankings. The Wentz Wagon is moving at high speeds and he has my vote for NFL MVP. The most complete team in the NFL right now.