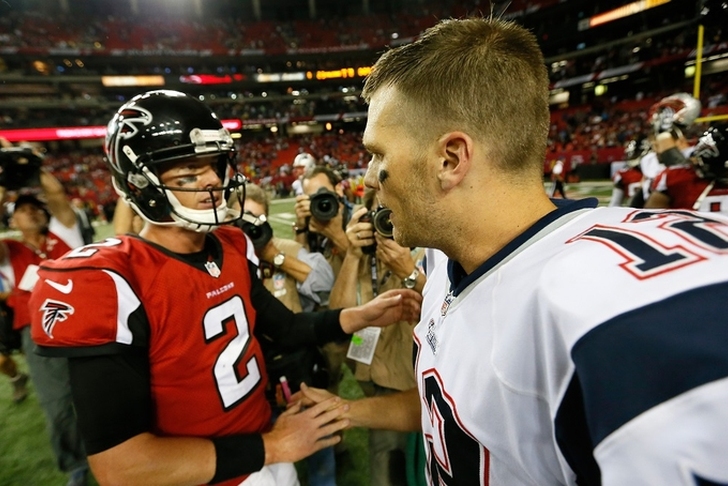 The 2017 NFL season is still a few months away, but OTAs area already underway and training camps are fast approaching. Teams across the league have dreams of making the playoffs and winning the Super Bowl, but after key additions were made (or not made) in the draft and free agency, that goal is obviously much more realistic for some teams than others. Here's how we see the standing of all 32 teams heading into the season:

32. Cleveland Browns
Cleveland drafted well, but still have way too many holes to fill in their roster. They will likely be in this spot all year, though there is finally reason for optimism as their rebuild seems to be moving in the right direction.

31. San Francisco 49ers
San Francisco's roster is competing with Cleveland's for the worst in the league despite a great draft, but have a few more veterans that give them the slight edge.

30. Los Angeles Rams
Jared Goff is a disaster, but they still have Todd Gurley and a solid defense - and didn't do much to upgrade the roster in free agency. However, Sean McVay has his work cut out for him.

29. Chicago Bears
Like most teams in the bottom five, the Bears have a major quarterback question (How long will they stick with Glennon? Is he - or Trubisky, for that matter - any good?) and need to improve defensively. They do have some talented pieces but are in the midst of a complete rebuild.

28. New York Jets
The Jets are bad and they're old, meaning they don't have a lot of hope of turning it around anytime soon. Rookie Jamal Adams should be a cornerstone for the future, however.

27. Los Angeles Chargers
The Chargers lost another season to injury in San Diego, but don't have a lot of promise for the 2017 season as they move to a new city.

26. Jacksonville Jaguars
The Jags have a lot of young players who appear to show promise, but have higher expectations defensively after several big acquistions. The question that will determine their season - is Blake Bortles really the answer at quarterback?

25. Indianapolis Colts
Andrew Luck is this team's only bright spot. New GM Chris Ballard added a few solid pieces in free agency, but this group still has a ways to go.

24. Buffalo Bills
The Bills have weapons and some talent on defense, yet need to be more consistent. It appears that Tyrod Taylor is their starter for now, but losses at receiver and on defense make me think they'll regress more than improve.

23. New Orleans Saints
Drew Brees is still elite and the offense can score with anyone. But that defense needs to get much, much better in a hurry, and they didn't do that in free agency.

22. Philadelphia Eagles
Philadelphia isn't the team we thought they were at the start of the 2016 season, but their future is bright with Carson Wentz under center. The additions of Alshon Jeffery and Torrey Smith give this offense a new dimension.

21. Arizona Cardinals
Arizona's defense has holes and aging weapons on offense, yet they basically decided to stand pat in free agency in order to re-sign Chandler Jones. They are trending downward.

20. Detroit Lions
Matthew Stafford and the offense pulled plenty of rabbits out of the hat at the end of games last year. Their chances of winning that many close games again are slim - and defense is still a big concern.

19. Cincinnati Bengals
Cincinnati's offense couldn't move the ball consistently last year, and their defense looked like Swiss cheese. The addition of Joe Mixon will give them another game-changing offensive threat, but there is still plenty of room to improve.

18. Miami Dolphins
Miami seemed to find their stride in the second half last year - but is that who this team really is? Can Ryan Tannehill continue to play at a high level? We'll see.

17. Baltimore Ravens
Baltimore's defense is very, very good. Finding an offensive identity will be key. Can Danny Woodhead be their answer at running back?

16. Minnesota Vikings
Again, the Vikings have a championship-level defense. They tried to improve their offensive line by signing tackles Riley Reiff and Mike Remmers, though there are still questions. Getting Dalvin Cook in the second round should give them a dynamic weapon in the backfield.

15. Washington Redskins
Washington's offense lost Pierre Garcon and DeSean Jackson in order to re-sign Kirk Cousins. Can Terrelle Pryor replace them? Improving the defense is a must to compete in the NFC, but they didn't really make any significant adds.

14. Tennessee Titans
Tennessee is trending up. Marcus Mariota looks poised for a breakout year, their running game is dynamite, they found a No. 1 receiver in Corey Davis and they have playmakers on defense. The Titans should expect a playoff berth next season.

13. Houston Texans
Houston's defense is amazing, and will be even better next year with a healthy J.J. Watt. Running back Lamar Miller and wide receiver DeAndre Hopkins are great weapons, but can they get anything resembling good quarterback play? Deshaun Watson's development will be key.

12. Carolina Panthers
Carolina still has all the key pieces of the team that made the Super Bowl in 2015. Everything seems to be leaning towards a bounce back year for Cam Newton and the Panthers, especially if Christian McCaffrey produces as expected.

11. Tampa Bay Buccaneers
Speaking of players preparing for a breakout season, Jameis Winston certainly fits that category. If the Bucs can find defensive consistency, look out.

10. Kansas City Chiefs
We know the story with the Chiefs - defense is elite, running game is great - but Alex Smith will always hold this team back.

9. Denver Broncos
We know how good the Broncos can be, but need to find something concrete from the quarterback position.

8. New York Giants
New York improved their defense last year and have a good passing game, which only got better with the addition of Brandon Marshall. However, they did not really address their weaknesses (running game, offensive line).

7. Oakland Raiders
Oakland fell apart after quarterback Derek Carr got hurt. However, their young core of stars are only getting better. They're counting on major contributions from rookies Gareon Conley and Obi Melifonwu in the secondary, but the Raiders will be very, very good.

6. Green Bay Packers
Green Bay's late-season surge showed how good this team can be. Once healthy, they'll be an elite team again despite questions in the running game.

5. Seattle Seahawks
The Seahawks are very, very close to having a complete roster. Finding five reliable offensive linemen and getting healthy on defense will make them the title contender they are.

4. Pittsburgh Steelers
A promising young defense with experienced, elite weapons on offense. With Martavis Bryant back in 2017, this team could be a juggernaut.

3. Dallas Cowboys
Dak Prescott and Ezekiel Elliott should be better in their second year, and Dallas thinks they found a marquee pass rusher (Taco Charlton) and cornerback depth in the draft. If those rookies can produce, look out for the Cowboys in 2017.

2. Atlanta Falcons
The Super Bowl told you how good this team is and will be. Their defense is full of first- and second-year players that are still reaching their potential, and the offense is unstoppable. They'll compete for the Super Bowl again next year.

1. New England Patriots
New England still runs the NFL as long as Tom Brady is under center. And with Rob Gronkowski coming back healthy next year, plus the stunningly great additions of Brandin Cooks and Stephon Gilmore, the road to the Super Bowl will likely go through Foxboro again.