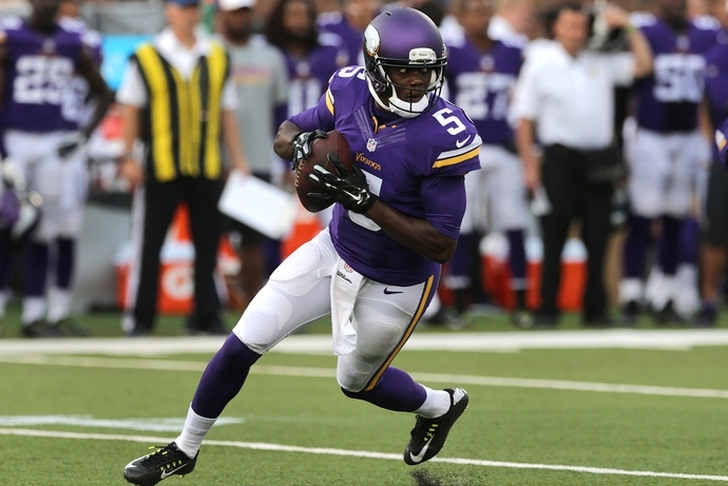 We're over halfway through the 2015 NFL season, and we're starting to get a sense of which teams are true contenders and which teams are going to be reverse-competing for draft slots. We're here to identify the good, bad and all the teams in-between with out NFL Power Rankings Heading Into Week 11.

Injuries are starting to mount up on the offensive line and in the backfield, but if any team can absorb a loss of personnel it's this deep Pats team.

The Panthers have the #3 ranked running game in the NFL and Cam Newton is the MVP candidate no one is talking about. Add in a defense that can take over whole games in a blink, and you've got an NFC title favorite.

The Bengals ran into an unexpected brick wall against the Texans, watching their offense fall into a mess of three-and-outs and lost opportunities. Undefeated no more, the Bengals still have a lot to prove down the stretch.

The Vikings went into Oakland and beat a tough Raiders team going away, moving into sole posession of first place in the NFC North. This Minnesota team is ahead of schedule and could make some serious noise in the postseason.

Green Bay's out of sync on both sides of the ball, but they're still one of the most dangerous teams on what's a really soft bubble for Super Bowl contenders right now.

The Broncos are still three games up on the Chiefs/Raiders in the AFC West, so it's not time to panic yet. However, if they lose a couple with Brock Osweiler replacing Peyton Manning, rumblings of an epic late-season collapse will get louder and louder.

The Steelers are in the driver's seat for the #5 seed in the AFC thanks to Ben Roethlisberger's heroics off the bench in Sunday's blowout of the Browns. If Big Ben is healthy for the team's final six, we've got them penned in as a playoff lock.

Eli Manning almost did it to the Patriots again, as New York was just a single play away from ending New England's undefeated season. Leading the NFC East at 5-5, the Giants are better than their record indicates.

The Seahawks are still in the playoff mix and they're the most dangerous 4-5 team we've seen in a LONG time. The offense is still a topsy-turvy roller coaster, though, so Seattle won't be able to survive very many defensive performances like the rough one they had against Arizona.

Buffalo's playoff hopes are alive and well after a win over the Jets, thanks to Rex Ryan's tried-and-true blueprint of running the ball, running it some more and running again.

Atlanta has lost three of four, with their only win coming in an ugly 10-7 snoozer against the Tennessee Titans. With a bye week to stew over a bad loss to the 49ers on the road, the Falcons need Sunday's game against the Colts to get back onto firm footing in the playoff race.

Oakland's much improved, but can this young bunch get over tough back-to-back losses to the Steelers and Vikings and reinsert themselves in the playoff conversation?

It's Matt Hasselbeck's team for the time being, and they'll need him to be on point in a big way as they're currently tied with the Houston Texans for the AFC South lead. A win over the Falcons would be a big first step.

The Jets decided to get away from the run against the Bills, and it cost them. This team hasn't quite figured out its identity, and that could be a death knell in a tight AFC Wild Card race.

Kansas City made it look easy against Denver, winning its third straight and vaulting itself back into the playoff picture. If any team's going to be a fast-riser as the weeks goes on, it's KC.

Case Keenum over Nick Foles? That seems like the move of a desperate team watching its playoff hopes get fainter and fainter. That's apt, because that's exactly what the Rams are.

Raise your hand if you thought the Bears would be playoff contenders after getting smacked by a combined 74-23 score against the Cardinals and Seahawks to open 2015. We thought so...

Kirk Cousins has the Redskins just a half game out of the NFC East lead, through eight touchdowns against just one interception in the team's last three games.

Sam Bradford's injury bug crept up and bit him again. Now it's Mark Sanchez's time to step up and lead Philly out of the muck that is the NFC Wild Card race.

The Dolphins came back and beat the Eagles on the road on Sunday, moving to just a game out of a Wild Card spot. That game was basically gifted to them, but a win is still a win.

Forgive us if we're not quite buying the AFC South-leading Texans yet. If they can sustain the defensive pressure that perplexed and doomed Cincinnati on Monday night, they'll vault up our rankings.

Tampa Bay's defense is a major liability, but QB Jameis Winston is showing that he has the tools necessary to lead this franchise for years to come. Heck, Tampa's still in the fringes of the playoff race right now..

The Chargers are basically Philip Rivers and the "others" now. If he had some modicum of weaponry around him, the Chargers would be in the playoff race.

Kudos to the Lions for keeping Aaron Rodgers off balance and keying a major road win at Lambeau. It may be a moral victory in a lost season, but it was an extremely impressive performance.

The Saints are still alive in the playoff race, but the defense is AWFUL. The Redskins looked like the "Greatest Show On Turf"-era Rams while dissecting the Saints on Sunday.

Blaine Gabbert did ok in his first test, but he's still Blaine Gabbert. The 49ers aren't going anywhere anytime soon with him, or Colin Kaepernick, under center.

The Jags are making progress and are just a game out of the AFC South lead. However, the AFC South is terrible and the Jaguars are still fatally flawed on both sides of the ball (Blake Bortles' come-up or not).

Dallas' seven-game losing streak is the franchise's longest in 26 years. Tony Romo may be coming back, but that may be a bad thing if the offensive line can't find its former mojo.

Losers of seven of their last eight, the Titans are still in the AFC South race. We're just a little bit of Marcus Mariota magic from an improbable Tennessee playoff run.

There's nothing there on the offense and the injuries are piling up everywhere. This is the definition of a lost season for John Harbaugh's crew.

Johnny Manziel was fine in a starting role in the team's loss to the Steelers, but this team's still an absolute mess on both sides of the ball heading into the bye. If Mike Pettine survives the bye, we have no doubt it'll be as a lame duck.