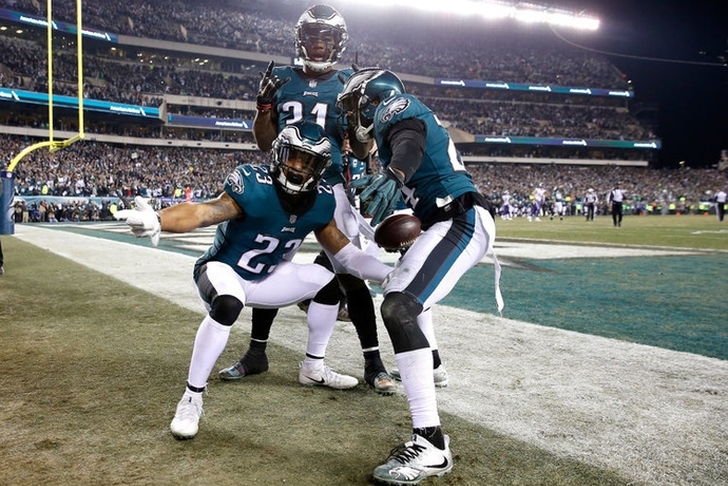 NFL training camp is about to start, so it’s time for the latest NFL power rankings. The defending Super Bowl champion Philadelphia Eagles are near the top, but they aren’t the only NFC team in the NFL top 10 teams. Teams like the Minnesota Vikings, Los Angeles Rams, Atlanta Falcons Green Bay Packers, and New Orleans Saints also rank near the top.

BetDSI is the number one place for fans to bet on NFL games! Use promo code - NFL120 - at BetDSI to get up to $600 in FREE bonus cash!

In the AFC, it’s the New England Patriots who lead the way in the NFL’s lesser conference. The Jacksonville Jaguars and Pittsburgh Steelers are next up. After that, it’s the likes of the AFC West contenders in the Los Angeles Chargers, Oakland Raiders, Kansas City Chiefs. The AFC South is also represented, with the Houston Texans and Tennessee Titans near the top.

Are you a die-hard NFL fan? If so, SUBSCRIBE to Chat Sports on YouTube breaking down the latest NFL news and rumors!

There are also some teams that missed the playoffs in the NFC last year, like the Dallas Cowboys and San Francisco 49ers who could make a leap into the NFL top 10 soon. Meanwhile, other NFL teams have work to do, like Miami Dolphins, Arizona Cardinals, New York Jets and the Buffalo Bills.

Final NFL Power Rankings:
#32: Miami Dolphins
They are below average at every position on both sides of the ball. It's going to be a long year for the Dolphins in 2018.

#31: New York Jets
Many thought the Jets wouldn't win a game last year, but they played tough all season long and surprised many analysts including myself. Will this happen again this season?

#30: Arizona Cardinals
If the Cardinals can find solid quarterback play and if David Johnson can go back to being the best running back in the NFL like 2016 the Cardinals could shock some teams.

#29: Buffalo Bills
The Bills made the playoffs last year and have fallen apart this offseason. They have three below average quarterback and have the worst offense in the NFL at this current moment.

#28: Cleveland Browns
Browns have one win the last two years and despite the offseason hype, I'm skeptical.

#26: Cincinnati Bengals
The Bengals offensive line has improved and have a talented team but they seen to struggle in games that matter the most.

#25: Chicago Bears
The Bears could be this year's Rams where they could shock the NFL. They have a ton of young talent and a new head coach. The NFC North is a tough division though.

#24: Tampa Bay Buccaneers
Jameis Winston will be suspended the first three games of the season, plus the Buccaneers schedule is extremely tough.

#23: Washington Redskins
The Redskins lost Kirk Cousins and added Alex Smith plus made a few head-scratching moves this offseason. The Redskins will be the bottom feeder in the NFC East this season.

#22: New York Giants
The hype around the Giants is exciting with new running back Saquon Barkley and the impact he will make this season.

#21: Baltimore Ravens
Joe Flacco is far from elite and he will continue to be the anchor dragging the Ravens down.

#20: Seattle Seahawks
The Seahawks their talented defense, have one of the worst offensive lines in football, but luckily for Seattle, they have Russel Wilson. Without Wilson, the Seahawks are a bottom five team.

#19: Denver Broncos
The Broncos will need to rely on their defense once again this season.

#18: Oakland Raiders
If new head coach Jon Gruden can get the Raiders back to 2016 form, that would be ideal. Derek Carr was an MVP candidate in 2016 and could carry this Oakland team in 2018.

#17: Detroit Lions
The Lions are an average team with an average quarterback and should finish with eight or nine wins this season.

#16: Kansas City Chiefs
The Chiefs with turn the keys over to quarterback Patrick Mahomes and hopefully he can get the Chiefs offense churning.

#15: Dallas Cowboys
The Cowboys struggled last season without Ezekiel Elliott, but if he is able to play an entire season the Cowboys could make a run at the playoffs in 2018.

#14: Houston Texans
The Texans defense will be healthy, oh and a guy named Deshaun Watson. The Texans making the playoffs shouldn't surprise anyone.

#13: Carolina Panthers
The Panthers made the playoffs last year but making it in will be tough considering how tough the NFC is this year.

#12: Los Angeles Chargers
Can the Chargers finally make the leap forward and win the AFC West?

#11: San Francisco 49ers
49ers ended the season on a 5 game winning streak and paid QB Jimmy Garoppollo this offseason, sop will he be able to live up to the expectations?

#10: Tennessee Titans
The Titans made the playoffs last season and improved on both sides of the ball this offseason.

#9: Pittsburgh Steelers
The Steelers locker room seems to be a little shaky this offseason which may plague the team during the season. With that being said Pittsburgh has some of the best talent in the NFL.

#8: Green Bay Packers
Aaron Rodgers is back, which means so are the Packers.

#7: Jacksonville Jaguars
The addition Andrew Norwell will only help the Jags run the football and play to their strengths.

#6: Atlanta Falcons
The Falcons are one of the most balanced teams in the NFL and hopefully, Atlanta can get back to their 2016 ways because they were fun to watch.

#5: New Orleans Saints
The Saints were a miracle play away from going to the NFC Championship game.

#4: Los Angeles Rams
The Rams added a ton of talent on both sides of the ball this offseason and if the big personalities can mesh there is no doubt the Rams could be the best team in the NFL.

#3: New England Patriots
Being the best team in the AFC isn't as impressive considering how much weaker the conference is to the NFC. As long as Tom Brady is under center for the Patriots, New England will be the favorite in the AFC.

#2: Minnesota Vikings
The Vikings had one of the best defenses in the NFL last year and added Kirk Cousins this offseason. If Dalvin Cook can stay healthy for the entire season, the Vikings will be tough to beat all year.

#1: Philadelphia Eagles
Carson Wentz looks ahead of schedule and the Eagles improved this offseason. It's hard to not rank the Eagles as the best team in the NFL.