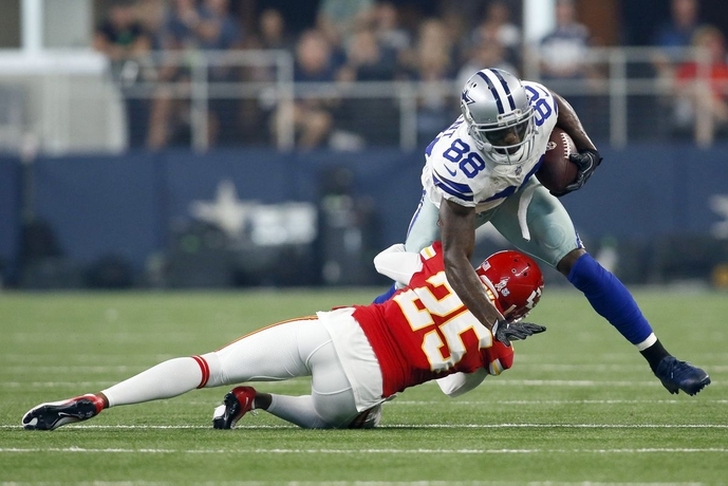 Week 9 of the NFL is almost in the books. This season has plagued the league with injuries and there were more this week. Below you will find the injury updates on Dallas Cowboys wide receiver Dez Bryant, Tampa Bay Buccaneers Quarterback Jameis Winston, and San Francisco 49ers Linebacker Reuben Foster.

Dez Bryant Injury Update
After making a catch in Sunday's game against the Kansas City Chiefs, wide receiver Dez Bryant was forced to leave the game and he was unable to return with an ankle injury. Luckily the ankle injury for Bryant isn't believed to be serious and should be able to play Week 10 against the Atlanta Falcons.

#Cowboys WR Dez Bryant’s ankle, which caused him to leave Sunday’s win over the #Chiefs, is described as “not serious,” source said.

Jameis Winston Injury Update
Winston is dealing with an AC joint sprain in his throwing shoulder which looked like it hampered his play on Sunday against the Saints or at least it appeared to hamper his play. I'm not sure what was worse, his pre-game speech or his performance on the field.

#Bucs coach Dirk Koetter says he is shutting down QB Jameis Winston for several weeks while his throwing shoulder heals. Fitz it is.

BREAKING: Jameis Winston To Miss "A Couple Of Weeks" With Injured Shoulder

Reuben Foster Injury Update
Reuben Foster met Adrian Peterson or the tackle. The bad news was Foster was injured on the play. When Foster has been healthy this season he has been a force on the field. The issue is, in the three games Foster has started for the 49ers he has had to leave in all three of them. Foster no doubt has the talent but it is looking like injuries may plague his career.

Reuben Foster with the huge stop of Adrian Peterson on 3rd and 1. Man, if Foster could stay healthy, he's such a huge weapon

If you want to hear more about these players then you need to watch The Fantasy Football Rumors Podcast where Tom Downey and Mitchell Renz break down what could have been.