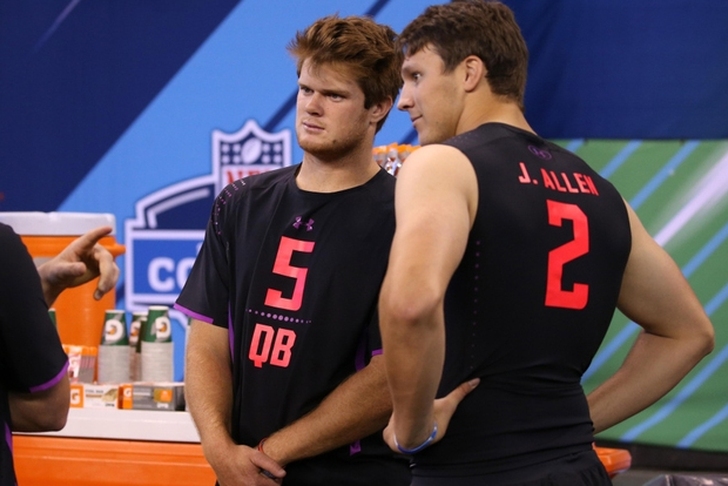 The 2018 NFL Draft is now less than three weeks away, and as such, teams are really starting to go through all the prospects and narrow down their top targets, particularly when it comes to the top few overall picks. Here are the latest NFL Draft news and rumors you need to know:

Odds for No. 1 overall pick
The Cleveland Browns hold the top pick in the draft, and while they're expected to take a quarterback, there are also a number of position players who are in play with the pick. Oddshark has released their odds on who will be the No. 1 overall selection:

Chat Sports has the Browns taking Sam Darnold in our latest mock draft.

Seahawks targeting Derrius Guice
The Seattle Seahawks have not had a reliable rushing attack since Marshawn Lynch initially retired, so it shouldn't be a surprise to see them looking to address that need in the draft. Eric Edholm of Pro Football Weekley reports that Seattle is targeting LSU running back Derrius Guice in the first round.

I’m told #Seahawks had a close eye on RB Derrius Guice at LSU pro day today. You can read my profile of him here: https://t.co/MVS71jjHLH

Guice rushed for 1,251 yards and 11 touchdowns while catching 18 passes for 124 yards and two more scores.

RELATED: Seahawks May Be Targeting Replacement For Russell Wilson In Draft

Patriots interested in Mason Rudolph
The New England Patriots are interested in trading up to take a quarterback in the first round of the draft, but if they are unable to do so, they are expressing interest in Oklahoma State's Mason Rudolph, according to Zach Cox of NESN.com.

The New England Patriots almost certainly will draft a quarterback later this month in preparation for Tom Brady’s eventual retirement, and Mason Rudolph’s name has come up in that conversation.

The Patriots recently ran the Oklahoma State product through a private workout, according to a report from NFL Media’s Ian Rapoport. Rudolph, whom Rapoport’s source described as “extremely busy,” reportedly has met with or worked out for six teams already, with a visit with the Buffalo Bills scheduled for this weekend.