NFL Draft Rumors: Seahawks May Be Targeting Replacement For Wilson, Patriots Have "Affinity" For Mayfield, And Jets Undecided On Which QB To Take 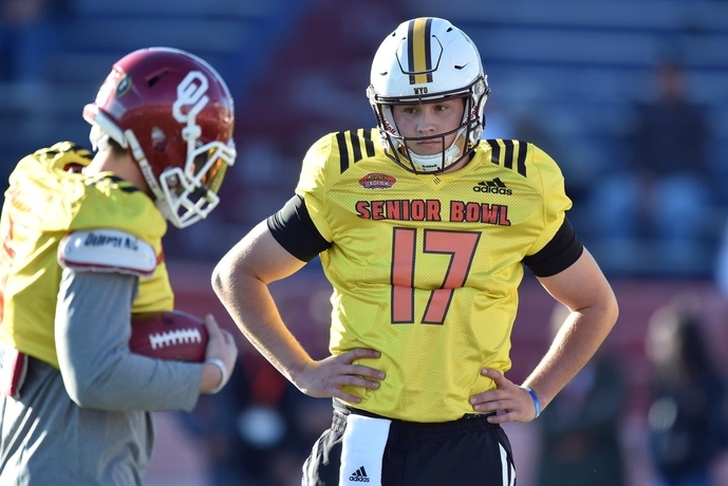 The 2018 NFL Draft is less than a month away and will be held at AT&T Stadium from April 26-28. As such, teams are really starting to go through all the prospects and narrow down their top targets, particularly when it comes to the four quarterbacks at the top of the draft. Here are the latest NFL Draft news and rumors you need to know:

This rebuild was largely expected to re-tool the roster around quarterback Russell Wilson, but there's a chance Seattle could also look to trade him following the 2018 season and are targeting Wyoming's Josh Allen in the draft, according to NFL Network's Jim Trotter.

"This is interesting because ... when John Schneider went and watched Josh Allen's pro day, Russell Wilson's camp reached out and said, 'Is there anything we need to know here? With all these changes going on, does this mean anything for Russell?'" Trotter explained on NFL Network's "Up to the Minute" on Wednesday. "And I'm told the Seahawks have no plans to move Russell Wilson this year, but if things don't go well this year, Russell Wilson's in the final year of his contract next year.

"Perhaps then he says, maybe this isn't a good fit, if this is a rebuilding situation here, and maybe he tries to push the button to move on after that."

The thinking would be that Allen would spend his rookie season backing up and learning from Wilson before taking over as the team's starting quarterback in 2019. He passed for just 1,812 yards with 16 touchdowns and six interceptions while rushing for 204 yards and five more scores in 11 games.

Wilson passed for 3,983 yards with 34 touchdowns and 11 interceptions last season while also rushing for 586 yards and three touchdowns.

Patriots have "affinity" for Baker Mayfield
The New England Patriots are interested in trading up to take a quarterback in the first round of the draft, and if they do, it will likely be for Oklahoma's Baker Mayfield, according to Manish Menta of the New York Post.

The Patriots' blockbuster trade with the Rams Tuesday night gave Bill Belichick more draft capital ammunition to try to trade up for Tom Brady's heir apparent. Could the Evil Empire rocket all the way up to No. 2 by making a deal with the Giants? A few teams in the Top 10, including the Jets, are fully aware of the Patriots' affinity for Mayfield.

For as good as Tom Brady still is, he is 41 years old and the Patriots don't have an heir apparent on their roster after trading Jimmy Garoppolo to the San Fransisco 49ers and Jacoby Brissett to the Indianapolis Colts last season.

Jets undecided on which QB to take at No. 3
While New England has a target, the New York Jets do not. Despite trading up to get the No. 3 pick in the draft, the Jets are still deciding which quarterback they want to take with that pick, according to Menta.

Make no mistake: The Jets are currently divided on which quarterback to take at No. 3. Oh, sure. The team will invariably try to sell us that (INSERT DRAFTED QB HERE) was the top choice all along, but I've heard enough varying opinions about these four quarterbacks from inside the organization to know better.

Let's get something clear: There isn't a civil war on One Jets Drive, but there are varying opinions and preferences. This regime has encouraged healthy debate through the years for all draft prospects, so I firmly believe that it's a good thing that there are differing positions on the top four signal callers. It shouldn't come as a surprise, after all. There are good and not-so-good traits for each of those players.