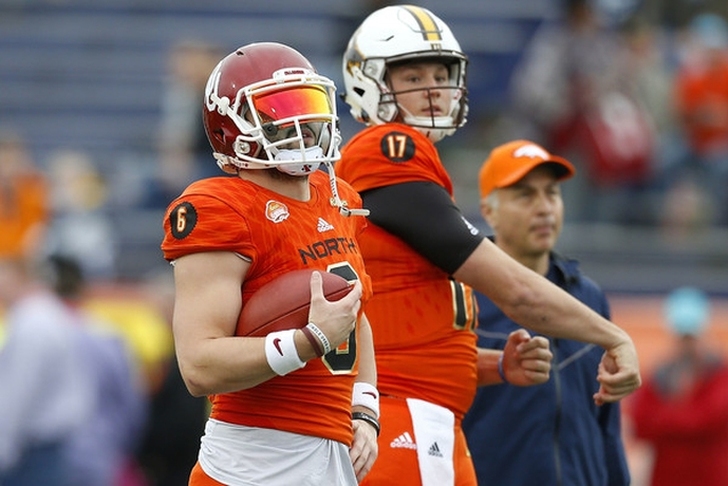 It's officially NFL Draft week with the first round kicking off tomorrow night in Arlington, TX, and there are still plenty of rumors flying around about where the top prospects will land. The top quarterback prospects are taking up most of the spotlight, and we have the latest on which teams are looking to trade up to acquire one. Here are the latest NFL Draft rumors you need to know:

The buzz on Baker Mayfield to the Browns at No. 1 has been growing in recent days, including by some of the Browns own in-house radio and TV analysts.

Dorsey has also staunchly defended Mayfield's character since the Senior Bowl, twice insisting that any issues are a narrative created by the media. This, despite the fact Mayfield was arrested for public intoxication and earned a brief benching at the start of his final home game for grabbing his crotch towards the Kansas sideline.

Furthermore, Browns draft consultant Scott McCloughan, who's been Dorsey's righthand man for the past couple of months, said in the fall that Mayfield was his favorite QB in this class, and that he reminds him of Brett Favre.

Cardinals targeting Josh Allen
The Browns are also interested in taking Wyoming quarterback Josh Allen with the No. 1 pick, but if they don't, the Arizona Cardinals are interested in trading up for him, according to Pete Prisco of CBS Sports.

Allen, a talented 6-foot-5, 233-pounder who is lauded for his arm strength, passed for 1,812 yards with 16 touchdowns and six interceptions last season while rushing for 204 yards and five more scores.

Steelers interested in Lamar Jackson
The Cardinals have also been linked to Louisville quarterback Lamar Jackson, but Prisco says the Pittsburgh Steelers are the team that appears to be the most interested in him, according to Prisco.

"I don't think that's going to happen," Prisco said of the Cardinals taking Lamar. "I did hear their quarterback coach, Byron Leftwich, likes him some. But I don't know if that's enough to get him picked there.

"I think Pittsburgh's in play for him," Prisco said of Jackson.

Jackson, who won the Heisman trophy in 2016, has visited or worked out for the Browns, Cardinals, Chargers, Dolphins, Patriots, and Ravens, among others. He passed for 3,660 yards with 27 touchdowns and 10 interceptions last season while rushing for 1,601 yards and 10 more scores.