NFL Draft Rumors: Browns To Take Allen With No. 1 Pick, Giants Targeting Barkley, Chiefs To Trade Up For Cornerback 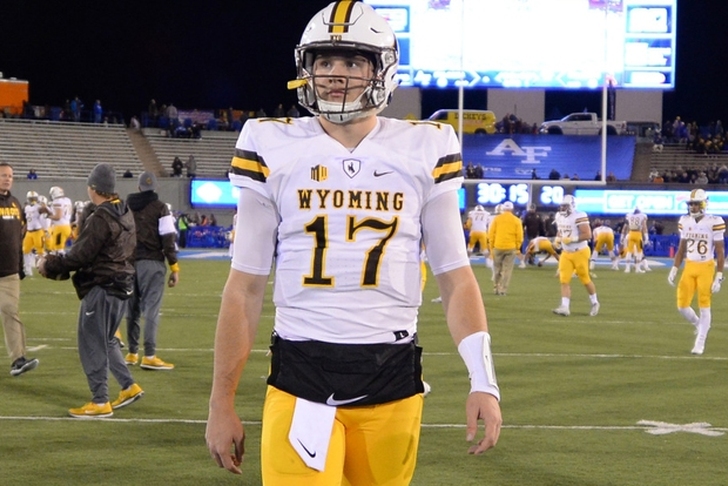 The 2018 NFL Draft is now just over a week away, and as such, teams are narrowing down their top targets, particularly when it comes to the top few overall picks. The top quarterback prospects are taking up most of the spotlight, and we have the latest on which one will likely be the first off the board. Here are the latest NFL Draft news and rumors you need to know:

It’s getting harder and harder to scoff at the rumors linking Josh Allen to the Browns with the top pick. Well, we can still scoff—but there’s a growing list of reporters and analysts who seem convinced Cleveland’s interest in Allen is genuine: ESPN’s Mel Kiper has steadfastly put the Wyoming signal-caller in the top spot in every one of his mock drafts over the past few months; Peter King reported that his source close to Browns’ GM John Dorsey believes Cleveland will take Allen; Sports Illustrated’s Albert Breer has heard Cleveland’s still trying to decide between Allen and Sam Darnold; and both NFL Network’s Daniel Jeremiah and NFL.com’s Lance Zierlein have reported that the Allen-to-Cleveland rumors have some legs. It’s lying season, sure, and it may just be an elaborate smokescreen; but sometimes, all that smoke means there’s a fire.

Allen, a talented 6-foot-5, 233-pounder who is lauded for his arm strength, passed for 1,812 yards with 16 touchdowns and six interceptions last season while rushing for 204 yards and five more scores.

The Giants view Saquon Barkley as a near-perfect prospect. They think he's a better player than Ezekiel Elliott, who went No. 4 to the Cowboys in 2016. All Elliott has accomplished is average 104.6 yards in his 25 NFL games, along with 22 rushing touchdowns in two seasons. He also has an entire offense built around him. The main difference? Barkley is a far superior pass-catcher. Plus, there are absolutely no character issues or concerns with Barkley.

“I thought all along this is the guy Dave wants,’’ said a national NFL scout who knows Gettleman from crossing paths with him on the road over the years. “And he might get him, if Cleveland is dumb enough not to take him at No. 1.”

Barkley rushed for 1,271 yards and 18 touchdowns while catching 54 passes for 632 yards and three touchdowns in 13 games last season. He also returned two kickoffs for touchdowns.

The Chiefs don’t own a first-round pick in this year’s draft (they dealt that pick away in the Patrick Mahomes trade last year), but I won’t be surprised if they move up from where they’re picking in the second round (No. 54 overall). They have a glaring need at cornerback and the top cover men will be long gone by the time they are on the clock if they stay put at No. 54. They need to get into the range of picks 35-40 in order to secure a Day One starter at that position, and many around the league expect them to make that happen.

Kansas City has been linked to Auburn cornerback Carlton Davis during the pre-draft process and is projected to go early in the second round.