NFL Draft Rumors: Giants Have 3 Targets For No. 2 Pick, Jackson Could Be Top 15 Pick, And Eagles Interested In Rugby Player 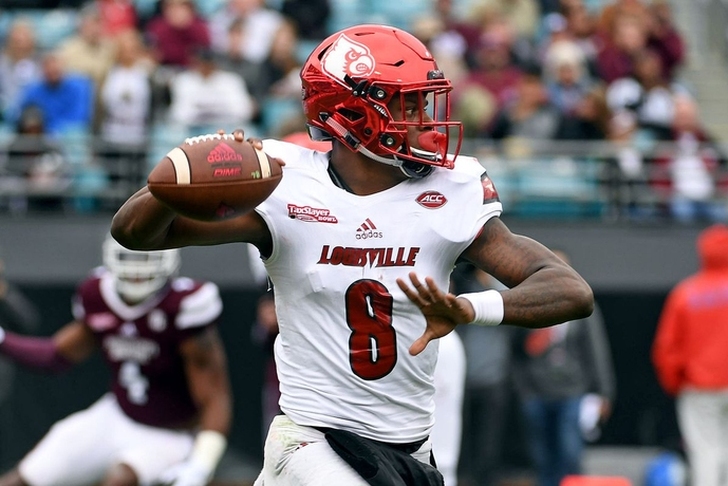 The 2018 NFL Draft is now just over two weeks away, and as such, teams are narrowing down their top targets, particularly when it comes to the top few overall picks. The top quarterback prospects are taking up most of the spotlight, and we have the latest on two projected first-rounders. Here are the latest NFL Draft news and rumors you need to know:

"Their top three choices are [Sam] Darnold, Saquon Barkley and Bradley Chubb," an NFL executive told Lombardo. "They are debating Barkley vs. Chubb, because they need an edge-rusher, but the scouts love Barkley.

"If Darnold is available, they're taking Darnold. They don't like [Josh] Rosen."

Darnold, who is projected to be the No. 1 overall pick by the Cleveland Browns in Chat Sports' latest mock draft, passed for 4,143 yards with 26 touchdowns and 13 interceptions. He also rushed for five more scores.

Lots of talk and confusion around Lamar Jackson. My understanding however, in regards to his draft stock, is that it continues to trend upward. Hard to imagine him falling him out of the 1st round. He could pretty high as well -- think about ARZ at 15 as a possibility. #NFLDraft

However, Jackson could end up going much higher than that. ESPN's Adam Schefter reported during the combine that Jackson is the No. 2 quarterback on one team's draft board.

Leftover tidbit from weekend combine: one team said it had Louisville’s Lamar Jackson as the second-rated QB in upcoming NFL draft.

Jackson, who won the Heisman trophy in 2016, has visited or worked out for the Browns, Chargers, Dolphins, and Ravens. He passed for 3,660 yards with 27 touchdowns and 10 interceptions last season while rushing for 1,601 yards and 10 more scores.

The Eagles have dipped their toe into the rugby player waters before with tight end Adam Zaruba, a former Canadian rugby star who signed with the Eagles last summer. Ultimately, Zaruba didn't make the team, though he did sign a futures/reserve contract with the team in January.

Now, the Eagles might be going back to that rugby well for another intriguing potential football player a Aussie rugby player Jordan Mailata will meet with the Eagles on Wednesday this week, per NFL.com's Gil Brandt.

The 6-foot-8, 348-pounder is working out as an offensive tackle, but he has never played football before. Mailata has posted a 40-yard dash time of 5.12 seconds and 22 reps of 225 pounds on bench press.