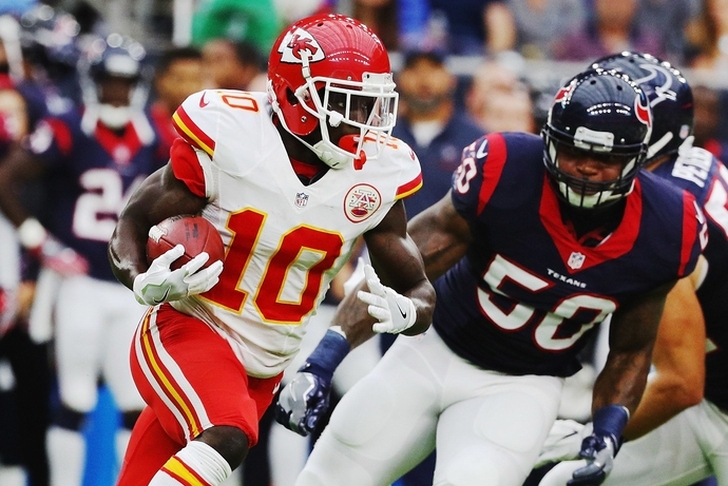 Kansas City Chiefs go head-to-head with Houston Texans on Sunday aiming to book their place in the AFC Championship Game.

The Chiefs recovered from an inconsistent start to the regular season in AFC West to progress to the play-offs with an impressive 12-4 record.

They are third favorites in NFL betting to go on and win the Super Bowl, but may not have things all their own way this weekend.

The Texans finished with a 10-6 in record in AFC South to secure a wild card berth and they came through that test with a narrow 22-19 victory over Buffalo Bills.

Read on as we preview the Chiefs versus Texans match-up and predict who we think will take a step closer to the Super Bowl.

Kansas City on a roll

The Chiefs looked anything but play-off material earlier in the season, with injuries to the likes of Chris Jones, Eric Fisher, Sammy Watkins, Andrew Wylie and Anthony Hitchens hitting them hard.

Their under-strength roster limped to a 6-4 record in their first ten matches – a run that included a 31-24 home defeat against the Texans.

However, their injury issues eased and a six-game winning run to end the regular season saw them progress straight to the Divisional Round.

Patrick Mahomes has been a key part of their drive to the playoffs and the Texans may find it difficult to stop the talented quarterback.

The Chiefs hold a 6-5 record over the Texans from their previous meetings and with home field advantage will fancy their chances of progressing.

Houston’s offense gives them a chance

Houston did well to beat Buffalo 22-19 after overtime in the wild card round and it would be foolish to underestimate their chances of winning in Kansas.

The Texans’ offense is strong, with players such as DeAndre Hopkins, Will Fuller and Kenny Stills capable of causing any team problems.

Fuller is particularly important to the Texans, with the team boasting a 7-2 record when he manages to complete a game.

Running back Carlos Hyde will also be out to prove a point, after lasting less than six months with the Chiefs before being traded to the Texans during the off-season.

He rushed for 116 yards and scored a touchdown in the Texan’s victory over the Chiefs back in October and will be eager to repeat the trick on Sunday.

Chiefs fully expected to progress
While the Texans were embroiled in a grueling battle with the Bills last weekend, the Chiefs’ players had the opportunity to rest and recuperate.

Some pundits may argue that momentum is on the Texans’ side, although the extra week off could well work in the Chiefs’ favor.

In addition to Hopkins, Fuller and Stills, the Texans also have Deshaun Watson and J.J. Watt in fine form, but it is unlikely to be enough to defeat the Chiefs.

With a stronger defense in front of Mahomes this time around, the Chiefs are worthy favorites to win.

Kansas City are priced at 10/11 with a -9.5-point spread and look great value to cover that on their way to the AFC Championship Game.