Here’s How Every NFL Team Ranks In Draft Success Over Last 5 Years, According To PFF 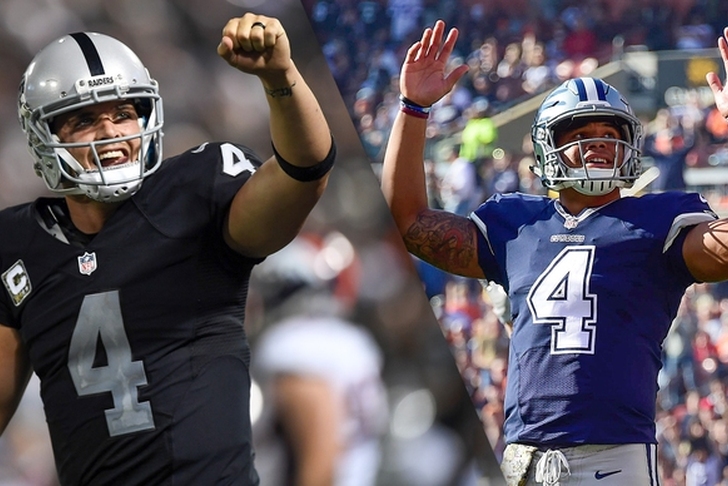 Grading a team's NFL Draft has become commonplace in the days immediately following the draft, with re-grades often coming after a class' first season in the league. However, it often takes several years for a class' impact to be fully known. As such, Pro Football Focus has gone back and evaluated which teams have drafted the best over the course of the last five years. Here are PFF's rankings.

32) San Francisco 49ers
PFF has DeForest Buckner as their highest-ranked player from the team in the past five years, and he was their 159th player overall. That lack of draft class success is why they figure to be one of the worst teams in the league.

31) Denver Broncos
Derek Wolfe and Matt Paradis are the only players Denver has drafted that made PFF's top 100, which they site as the reason why the Broncos are so low. They have been able to balance out a lack of draft success with some quality free agency signings.

30) Pittsburgh Steelers
Le'Veon Bell kept the Steelers out of the basement with David DeCastro as the only other player who made PFF's individual top 100 rankings. Some of their young defensive players could boost them up these rankings in future years.

29) New York Jets
New York might be the least talented team in the league and their lack of draft success is a big reason why. Sheldon Richardson and Leonard Williams are their two best picks over the last five years, but lack of success everywhere else has really hurt them.

28) Buffalo Bills
The Bills haven't had much success with many of their draft picks, with PFF rating Sammy Watkins as their best player - even though he can't stay healthy.

27) Chicago Bears
Another team who has gone from playoff contender to bottom dweller thanks to a lack of draft success. Cody Whitehair has been their best draft pick with Alshon Jeffery no longer on the team.

26) Cincinnati Bengals
Star tight end Tyler Eifert is the only player that PFF ranks in their top 100, which they site as the reason why the Bengals are so low. Like Chicago, that also helps explain their recent downfall.

25) Cleveland Browns
With so many chances at top picks, Cleveland has had to hit on some of them right? Joel Bitonio and Duke Johnson are the two players PFF mentions as Cleveland's best.

24) New Orleans Saints
Wide receiver Michael Thomas was No. 9 on PFF's individual list and is the only player they mention on their rankings, though a lack of success in drafting defensive players is why they're only at No. 24.

23) Jacksonville Jaguars
The Jags have a lot of young players who have promise, especially on defense. PFF mentions Jalen Ramsey as the star, but they have several good young stars, including Allen Robinson.

22) Tennessee Titans
Led by Jack Conklin and Marcus Mariota, Tennessee has developed a few young stars to build around. However, most of their key players were they signed via free agency.

20) Houston Texans
Jadeveon Clowney finally stayed healthy last year and emerged as one of the best defensive players in the league, fulfilling his potential as the No. 1 pick in the draft. However, outside of him, Houston's draft picks have been very mediocre.

19) Philadelphia Eagles
Carson Wentz is obviously the biggest star in Philadelphia, but PFF's rankings mention Jordan Hicks as the "surprise standout" for the Eagles that has them at No. 19 on this list.

18) Los Angeles Rams
Despite the Jared Goff disaster, the Aaron Donald selection has been the saving grace for the Rams. Trumaine Johnson was the only other LA player to crack the top 150.

16) Baltimore Ravens
The only player mentioned in PFF's rankings is nose tackle Brandon Williams, but several quality selections has Baltimore right in the middle of those rankings.

14) New York Giants
New York has the most individual success of any team to this point on the list, led by Odell Beckham Jr. and Landon Collins, but their draft picks have largely been hit or miss over the last few years.

​12) Washington Redskins
Tight end Jordan Reed is Washington's best draft pick over the last five years, according to PFF, who mention that they're developed talent is why they're a playoff contender.

11) Green Bay Packers
The Packers have a good number of talented young players which PFF says makes them "more than just the play of elite signal-caller Aaron Rodgers." Defensive lineman Mike Daniels is the long player PFF calls out by name in their rankings.

10) Atlanta Falcons
Desmond Trufant is PFF's highest-rated player from Atlanta, but their several young stars are a big reason why they made the Super Bowl last year. Guys like Devonta Freeman and Vic Beasley certainly come to mind.

9) Miami Dolphins
With several drafted stars in the last five years like Jarvis Landry, Ryan Tannehill and Jay Ajayi, it's no surprise to see Miami in the top 10. However, DeVante Parker "is still Miami’s top-ranked player in wins-above-replacement," according to PFF.

8) Tampa Bay Buccaneers
Led by Jameis Winston, Mike Evans and Lavonte David, the Bucs are poised to have a breakout season thanks to their litany of young talent.

7) Indianapolis Colts
The Colts have struggled to find talent on the defensive side of the ball, but PFF cites the deadly combo of Andrew Luck and T.Y. Hilton has the biggest reason why they were so high on PFF's list.

6) Minnesota Vikings
PFF writes that "Minnesota is led by WR Stefon Diggs and S Harrison Smith, both of whom rank in the top 40 individually." The combination of those two, plus star corner Xavier Rhodes, puts the Vikings very high on their list.

5) Los Angeles Chargers
PFF acknowledges that it's a surprise to see the Chargers so high in their rankings given their lack of success on the field, but Joey Bosa, Keenan Allen, Jason Verrett and Hunter Henry all rank among their top individual players.

4) Carolina Panthers
The play of linebacker Luke Kuechly and defensive lineman Kawann Short elevated the Panthers to No. 4 on PFF's list, but the play of wideout Kelvin Benjamin and corner James Bradberry have also been good picks for Carolina.

3) Seattle Seahawks
The pick of Russell Wilson is almost solely responsible for Seattle being No. 3 on this list, as PFF writes that his "play under pressure makes him the highest overall individual value in the league."

2) Oakland Raiders
Khalil Mack. Derek Carr. Amari Cooper. Those are three of the biggest young stars in the entire league and all play valuable roles for the Raiders. They are why PFF ranked them second.

1) Dallas Cowboys
Dak Prescott is the headliner, according to PFF, but fellow players like Ezekiel Elliott, Travis Frederick, Zach Martin and Byron Jones all help put the Cowboys in the top spot.