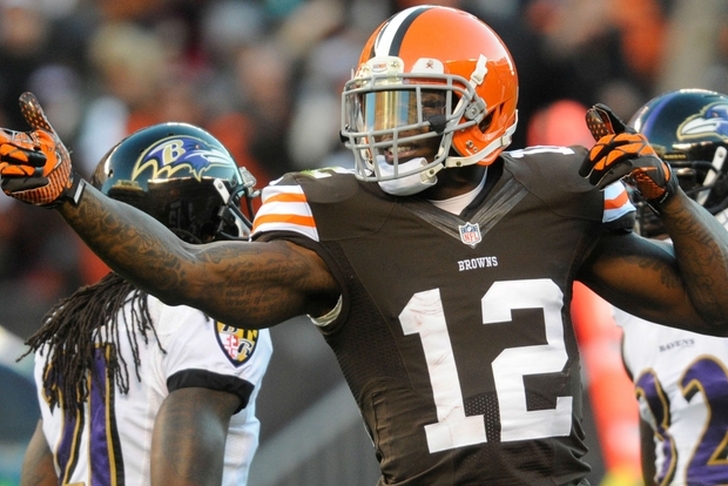 Cleveland Browns wide receiver Josh Gordon has resurfaced after Adam Schefter tweeted about him on Tuesday during the madness that has been the NFL Trade Deadline.

Browns WR Josh Gordon’s meeting with the NFL is scheduled for Wednesday, not today, per source. Reinstatement could soon be near.

Gordon hopes to be reinstated to the NFL following a year-long suspension that caused him to miss the 2015 season for violating the league's substance abuse policy. He was set reinstated in 2016 as long as he served a four-game suspension, but Gordon opted to enter a rehab facility instead. His petition for reinstatement was denied in May, but it is expected to be approved this fall.

Though he's extremely talented, Gordon has dealt with plenty of off-field troubles that have kept him off the field each of the last two seasons. The Browns left open the door for a Gordon return back in March, but have said they like who they have on their roster at wide receiver and don't expect him back. Cleveland would have to cut him in order to officially part ways, which they plan to do.

Which teams could take a gamble on Gordon once he hits the open market? Here are the five teams most likely to sign or trade for him:

5) Carolina Panthers
The Panthers upgraded their receiving core by drafting Curtis Samuel in the second round and signing Russell Shepard, but aren't sold on Devin Funchess serving as a starter long-term. Carolina's lack of weapons was very obvious last season and Gordon would provide a formidable duo with Kelvin Benjamin. However, they may want to stay away from Gordon and his off-field issues given what they went through with Greg Hardy - but he would be an upgrade. Adding a big play receiver who can stretch the field and play into the strengths of Cam Newton would be better instead of leaning on Christian McCaffrey to be their leading receiver.

4) Buffalo Bills
After trading Sammy Watkins to the Rams, Buffalo lacks a true No. 1 receiver. Enter Gordon, who would provide that for a team that is hoping to compete for a wild-card spot. Tyrod Taylor, LeSean McCoy, and Gordon would certainly form a very interesting trio. The Bills have been struggling through the air since losing Charles Clay and, if there is one strength to Taylor's passing game, it's the deep ball.

3) New York Jets
Speaking of teams with no weapons, we have the Jets. Jermaine Kearse has been solid and Robby Anderson is starting to emerge. The Jets need talent and depth at wideout, making them the team that could gamble on a game-breaker like Gordon. What do the Jets have to lose?

2) Jacksonville Jaguars
The Jaguars passing game has been hurting this season and Allen Robinson's injury has played a big role in that (along with Blake Bortles being Blake Bortles). The Jaguars have been sniffing around looking for a wide receiver and taking a risk on a player like Gordon may not be a bad idea. Gordon can stretch the field and is a decent blocker on the outside. The Jaguars believe they are in win-now mode and they might pursue Gordon to go all-in on a postseason berth.

1) Chicago Bears
The Bears already have their quarterback of the future in Mitchell Trubisky, but have a lackluster receiving core that only got worse when Kevin White suffered a serious injury for the third consecutive season. Chicago drafted him to be a No. 1 receiver, yet since he can't stay healthy, the Bears need to look elsewhere for that guy. Trubisky won't reach his full potential without a go-to receiver and that knowledge could cause Chicago to take a risk with Gordon.