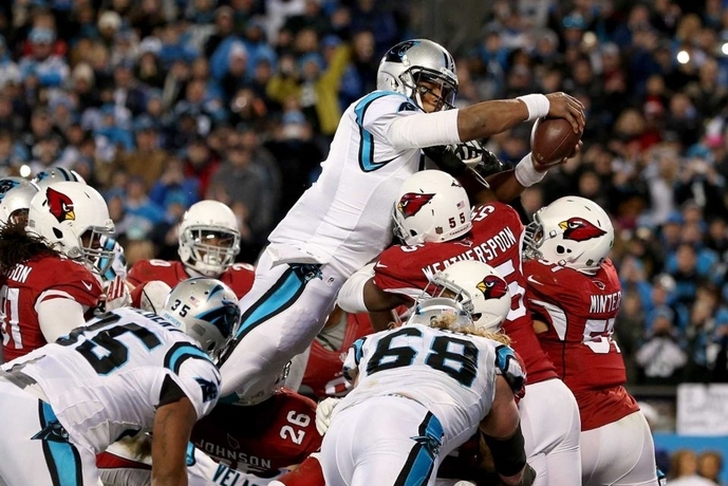 The 2016 NFL season is just one day away, and we could not be more excited. Teams across the league have dreams of making the playoffs and winning the Super Bowl, but that goal is obviously much more realistic for some teams than others. Here's how we see the standing of all 32 teams heading into the season:

1. Carolina Panthers
Carolina did lose Josh Norman, but everyone else is back for this team that went 15-1 last season. They also get No. 1 receiver Kelvin Benjamin back after a torn ACL caused him to miss all of last season, and he looks fully healthy.

2. Arizona Cardinals
The Cards have the most explosive offense in the league and one of the best, most opportunistic defenses. They just have to prove they can do it consistently in 2016.

3. Seattle Seahawks
The Seahawks struggled at the start of last season as they tried to break in a few new pieces, but were as good as anyone from Week 10 on. This team will contend for a Super Bowl berth again this year.

4. New England Patriots
New England would be No. 1 on this list if Tom Brady didn't have to miss the first four games of the season, as Jimmy Garoppolo showed he still has plenty of room to grow. The Pats strengthened their offense by adding tight end Martellus Bennett to pair with Rob Gronkowski, and the rest of the team is just as strong.

5. Pittsburgh Steelers
The Steelers need to prove they can stay healthy, but the combination of Ben Roethlisberger, Le'Veon Bell (once he returns from suspension) and Antonio Brown can carry this team to great heights.

6. Green Bay Packers
Eddie Lacy is in shape and Jordy Nelson is healthy. As long as those two things stay the same throughout the course of the season, Green Bay will be able to play with - and beat - anyone.

7. Denver Broncos
We know what we're going to get from Denver's defense...but what can the offense do with Mark Sanchez Trevor Siemian under center? Gulp.

8. Cincinnati Bengals
The Bengals failed to win a playoff game yet again last season, though we know what they can do in the regular season.

9. Kansas City Chiefs
Kansas City is looking to prove that last year's winning streak is no fluke, and they have virtually all of the same pieces in place.

10. Dallas Cowboys
All aboard the Dak Prescott hype train!! The 4th-round pick showed in the preseason there's a lot of be excited about in Dallas, and if he can just keep the ship afloat until Tony Romo gets back, the Cowboys will be NFC East champs.

11. Minnesota Vikings
Adrian Peterson's greatness and a stifling defense should lead the Vikings to at least a .500 record. How quickly Sam Bradford adapts to his new team will determine if they make the playoffs or not.

12. Oakland Raiders
Oakland is perhaps the most promising young team in the league, and many think this is the year they put it all together. Derek Carr, Amari Cooper and Khalil Mack should end the Raiders' postseason drought.

13. Indianapolis Colts
Last year was disastrous for Indy, and though their defense still leaves much to be desired, Andrew Luck can mask a lot of those deficiencies.

14. Washington Redskins
Is Kirk Cousins more than just a one-year wonder? The answer to that question will likely determine the course of Washington's season.

15. New York Jets
With Fitzpatrick back, the Jets have playoff potential. They just need to prove they can play at that level consistently.

16. Houston Texans
Houston's defense should be one of the best in the NFL again, but they need Brock Osweiler and Lamar Miller to play well offensively to give them any sort of a shot at making the playoffs. Both players looked great in the preseason, but they need to prove they can do it when it matters.

17. Buffalo Bills
Buffalo has a lot of talent, but something just feels off. They need to get better rushing the passer and more consistency from Tyrod Taylor for them to accomplish their goal of making the postseason.

18. New York Giants
Odell Beckham Jr. is perhaps the best receiver in the league. Other than that, this team is full of question marks - especially defensively.

19. Tampa Bay Buccaneers
Tampa Bay is another talented young team, but they're still probably still another year or two away from truly competing. That being said, Jameis Winston and the Bucs will surprise a lot of people.

20. Jacksonville Jaguars
Jacksonville is another one of those up-and-coming teams. A lack of veteran leadership could hold them back, but don't be shocked to see the Jags get close to .500 this year.

21. Los Angeles Rams
Todd Gurley is a beast, and the defense is talented. But what can the rest of the offense do? Will Jared Goff ever see the field?

22. Chicago Bears
The Bears are a team in flux undergoing a rebuild. They should be exciting offensively with Alshon Jeffery, Kevin White and Jeremy Langford, but defense is a concern.

23. Atlanta Falcons
Atlanta went 3-8 down the stretch last season, displaying an alarming amount of inconsistency on both sides of the ball. That has to improve if they want to do anything in a good NFC South.

24. Miami Dolphins
New head coach Adam Gase will bring a needed attitude change to Miami, but not enough to overcome the holes they still have on the roster. Ryan Tannehill also needs to play much better.

26. Baltimore Ravens
Injuries killed Baltimore last year, and it also masked a lack of talent on the roster. That will be exposed against a tough schedule in 2016.

27. Detroit Lions
No Calvin Johnson and no major defensive improvements mean the Lions may be headed for a bottom-five finish.

28. San Diego Chargers
Speaking of lacking legitimate weapons, that fits the Chargers to a tee. Philip Rivers has very little talent around him on either side of the ball.

29. Tennessee Titans
Tennessee needs to see growth from Marcus Mariota in Year 2, but the rest of their roster (outside of running back) leaves much to be desired. They'll struggle to reach four or five wins this season.

30. Philadelphia Eagles
The Eagles gave up a lot of players to draft Carson Wentz, and despite playing just one quarter of preseason ball, he's starting Week 1. Philadelphia now has a suspect defense and an offense that lacks legitimate weapons - and a huge question mark under center.

31. San Francisco 49ers
Simply put, the 49ers have one of the worst rosters in the league. Throw in major quarterback questions, a lack of offensive weapons and suspect secondary, you have a team that may end up with the No. 1 pick.

32. Cleveland Browns
As bad as San Francisco's talent level is, Cleveland's is even worse. With no weapons and no notable defensive players, the Browns can only hope that Robert Griffin III magically regains his rookie year form. Their fairly strong preseason erased concerns that they could go 0-16, but three wins seems to be the most this team will get.