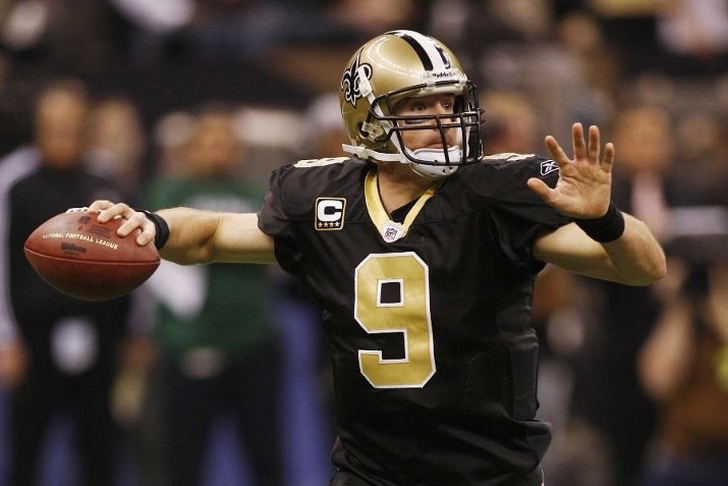 Look, let's cut to the chase - unless Peyton Manning magically trades bodies with Blaine Gabbert, he's taking home this year's MVP award. Some of the guys trailing in his wake are having fantastic seasons, though - Andrew Luck, Drew Brees, and a handful of other guys are playing some excellent football this year. This week, let's take a look at what these guys have done, and think about how this race would look if it wasn't being dominated by a football robot sent back in time to win the Super Bowl.

It says a lot about Peyton's candidacy that even after two "subpar" games, he's still thrown 10 more touchdowns than the guy in second place.

Brees absolutely TORCHED the Buffalo Bills last Sunday, completing 76.5 percent of his passes while racking up five touchdowns in a 35-17 rout. It was enough to get him back into the #2 spot after conceding it to Andrew Luck last week, and with upcoming games against San Francisco, Seattle, and Carolina, he'll have plenty of opportunities to prove he belongs here. In an "ordinary" season (one with no cyborg Manning), Brees would be your frontrunner right now.

Andrew Luck's 5-2 Colts might have dropped games to Miami and San Diego, but they also have quality wins over San Francisco, Seattle, and Denver. It's hard to find a team with more wins over quality opponents anywhere in the NFL, and for that alone we have to give Luck (who's been insanely poised so far this year) some respect. Luck was just spectacular in Indy's win over Denver, and although this might not be his year to win the MVP award, we'll be absolutely shocked if he doesn't take one home in the not-too-distant future.

No, the Chiefs still haven't beaten a team with a winning record, but at the end of the day 8-0 is 8-0. Smith has embraced the 'game manager' reputation that dogged him in San Francisco, and he's finding ways to win games week after week. While he'll have to keep winning when Kansas City's schedule ramps up to stay here in the second half of the season, we have to give some well-earned recognition to the QB of the NFL's last undefeated team.

Seattle (7-1) has just two remaining opponents above .500, and one of them is a San Francisco team that the Seahawks smoked 29-3 earlier this year. We'd be absolutely shocked if the 'Hawks don't end up with a 13-3 record or better, and Wilson is developing into one of the NFL's premier field generals. He might not have Peyton Manning's accuracy or Aaron Rodgers' arm, but Wilson makes plays when it counts, game after game.

Aaron Rodgers, Green Bay Packers QB: It doesn't matter how many of his receivers are hurt or struggling - Rodgers finds open targets and wins football games. With him, Green Bay is a dangerous team no one wants to see in the playoffs. Without him, they'd already be looking ahead to the 2014 draft.

Jamaal Charles, Kansas City Chiefs RB: The numbers Charles puts up on the ground won't knock your socks off, but his versatility is what makes him an MVP candidate. Through eight games, Charles has caught 41 passes for 383 yards and two touchdowns, and he's put up at least 100 yards of offense in every single game so far this season.

Cam Newton, Carolina Panthers QB: In the three games since his three-interception debacle in Arizona, here are Newton's stats: 58/75 (73.4 completion percentage), 667 passing yards, 6 touchdowns, no interceptions, 106 rushing yards and two rushing touchdowns. Carolina won all three games, and outscored their opponents 96-38. The opposition hasn't exactly been fierce (the wins came over Minnesota, St. Louis, and Tampa Bay), but if Newton can keep this up, he'll be in our top five in the very near future.