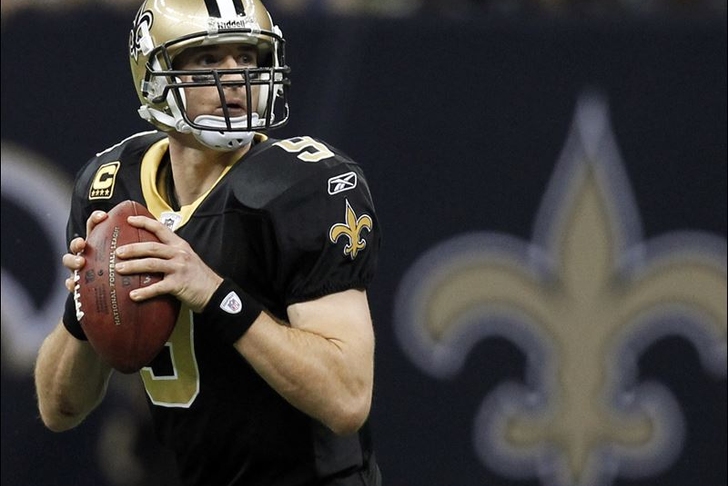 Can Drew Brees catch up with Peyton Manning? It doesn't look good, you guys. Still, there are a few ways Brees could gain some ground on Manning. What would have to happen? Read on and find out...

Peyton Manning must have taken it personally when we said there was a small chance that Drew Brees or Andrew Luck could catch up with him, and he took it out on the San Diego Chargers on Sunday. Manning completed 25 of 36 passes, racked up 330 yards and threw four touchdowns (with no interceptions) in a 28-20 win over San Diego.

Manning has now thrown 33 touchdown passes on the year, and is on pace for 57 - that's seven more than the current record (set by Tom Brady in 2007), for those of you keeping score at home.

If you know someone betting on a player other than Peyton to win the award, schedule an intervention for them immediately. They need your help and support.

On third down against the Dallas Cowboys last Sunday, Drew Brees was 9-for-9 for 138 yards and three touchdowns. There are guys starting in the NFL who'd love to put up those stats for an entire game. Brees is currently the only NFL player with a prayer of unseating Manning, and he's currently second to Manning in almost every single passing statistic.

Here are the most likely scenarios that could lead to Brees winning the MVP award:

- In the middle of next weekend's Broncos-Chiefs game, Peyton Manning decides to quit football to pursue his true love: competitive knitting.

- Peyton Manning is revealed to be a (Robot/Alien/Al Qaeda Sleeper Agent) and is summarily kicked out of the league.

- Peyton Manning's kung-fu master is killed by a rival, and Manning is forced to leave the Broncos to seek revenge and defend the honor of his dojo.

Megatron makes his first appearance in our power rankings this season thanks to another two-touchdown performance against the Chicago Bears (his third game with multiple TDs this year). He now has five in his last three games, and the Lions find themselves 6-3 and in the drivers seat in the NFC North.

The Lions have a very cushy schedule through the stretch run, which makes them highly likely to end up with a first-round bye. Johnson is only going up against one top-10 secondary over the rest of the season - and that's a Pittsburgh team that teams aren't throwing against because they're hopeless against the run. Megatron is hitting his stride at the perfect time, and we'll be absolutely shocked if he doesn't come up with some monster performances before the playoffs start.

Johnson ends up in the #3 slot thanks to his recent success and his potential over the rest of the season - he may not be able to catch up with Brees or Manning, but he's the best wide receiver in the NFL by a country mile.

Russell Wilson has been very good this year, but the real engine driving the Seahawks offense is our old friend Beast Mode. Lynch has really stepped up over the past few weeks, rushing for 270 yards over Seattle's last two games.

If the 9-1 Seahawks keep rolling, expect some healthy debate over whether Lynch or Wilson is more deserving of MVP consideration. Neither has a realistic chance of catching up with Manning, but both are phenomenal players making a huge difference for one of the NFL's best teams. Why rank Lynch ahead of Wilson, if both have a solid case?

Really, we just want to live in a world where this guy can win an MVP award.

So, about those Chiefs. Yeah, maybe they haven't had the toughest schedule yet (zero teams they've played are over .500, as any Broncos/Seahawks/Saints fan has probably told you at least 50 times already, but Charles should get some major recognition for being Mr. Reliable on offense, week after week.

Charles' success season will largely depend on how he does over the next few weeks. The Chiefs are staring down a brutal schedule after their bye week, with Denver twice, San Diego twice, and a visit from Andrew Luck's Colts. If they can run the gauntlet with Charles leading the way, he'll start getting some serious (and well-deserved) recognition from the rest of the league.