Breaking Down the MVP Contenders - Week 3 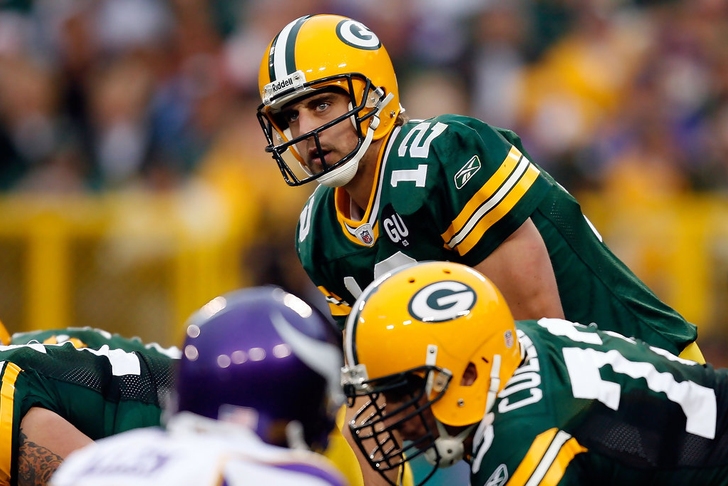 Peyton Manning is like the Alabama of our MVP rankings - until he slips up or loses a game, the top spot is his.

Last week's highest climber fell back down to earth over the weekend after a nasty road loss, and another contender jumped back into the second spot thanks to a dominant performance on Sunday.

As a reminder, here are the criteria we’re using to predict the next NFL MVP:

Peyton didn't have to try very hard to outshine his little brother in the latest Manning Bowl - Eli was picked off four times, bringing his total up to seven in two games. The elder Manning put on an excellent performance, even if it was slightly understated after his seven-touchdown showing in week 1.

The real story of this year's Manning Bowl could turn out to be the loss of Ryan Clady -Denver's All-Pro left tackle is out for the season after sustaining a foot injury late in the fourth quarter. Clady will be replaced by the relatively unknown Chris Clark, and it remains to be seen if Denver's pass protection will be as airtight without Clady in the mix.

Fortunately for the Broncos, their next opponent is an Oakland Raiders team playing without starting safety Tyvon Branch.

Talk about bouncing back. After a tough road loss to the San Francisco 49ers in week 1, Rodgers took out his frustration by eviscerating the hapless Redskins over three brutal quarters before he took his foot off the gas pedal in the fourth. Rodgers dissected Washington's secondary, and by the time the dust settled James Jones and Randall Cobb had combined for 306 receiving yards.

This Sunday, Rodgers and the Pack travel to Cincinnati to take on the Bengals. Cincy will be a harder team to break down (they couldn't be any easier), but Rodgers is already rolling.

The Bears have had two wins in two weeks thanks to clutch drives from...Jay Cutler? We're having a hard time believing it too, but Cutler has been the most clutch player in the NFL so far this year. His second game-winning fourth quarter drive came at the expense of the Minnesota Vikings, and despite his lack of flashy stats, Cutler is winning games for his team.

Next up? A trip to Heinz Field to take on the reeling Pittsburgh Steelers. If the Steelers come out flat for the third straight week, Cutler won't need fourth-quarter heroics on Sunday night.

Brees didn't have the best game of his career against the Bucs last Sunday, but like Cutler, he led a game-winning drive for the second week in a row. The Saints QB is building fantastic chemistry with tight end Jimmy Graham, who could be the best player at his position in the NFL in the very near future.

This Sunday, Brees will take on the resurgent Arizona Cardinals, and if the Saints are still undefeated come Monday, Brees will maintain his position as a legit MVP contender.

Full disclosure: we've loved BEAST MODE ever since his glory days at Cal. After a few mixed seasons in Buffalo, Lynch has developed into the offensive motor of one of the NFL's best teams. The 49ers came into Seattle looking like the best team in the NFL, and left humbled after a 29-3 beatdown. One of the biggest reasons for the mismatch? The vaunted Niners D being completely unable to find an answer for Lynch.

Next week, the Seahawks take on the hapless Jacksonville Jaguars, and if the Jags play as badly against Seattle like they did last week against Oakland, Lynch could set three or four NFL records.