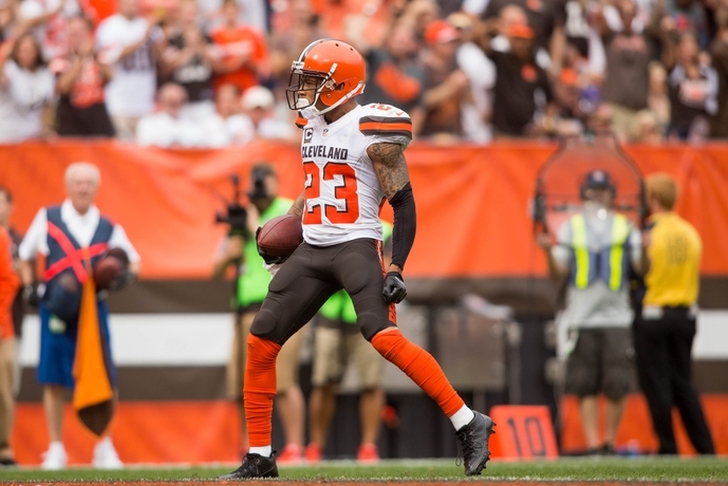 Joe Haden was released by the Cleveland Browns earlier Wednesday morning. As a result, this is now an article about which teams could sign Haden. Much of the original story is still below, just modified to eliminate the trade issues and be more inclusive now that anyone can sign him.

Haden, from 2010 to 2014, was one of the best corners in the NFL. But the past two years have not been good for Haden and he has not played like a No. 1 corner. He was severely limited by injuries in 2015 and struggled badly when on the field. He was better in 2016, but still not quite the same and missed time as well. Couple the injuries with Haden's contract (three years left with just under $11 million due per year) and that's why the Browns were unable to find a trade partner for Haden. Haden the player had value, but the contract prevented a trade.

In the original trade article, teams with not enough cap space to take on the contract weren't included. But since Haden is going directly to free agency (no waivers and a new contract), that hurdle is no longer an issue. Of course, that also assumes Haden ends up taking enough of a pay cut to fit under his new team's salary cap. Frankly, nearly ever team in the NFL is an option for Haden. He's not a No. 1 CB anymore, but he can contribute. So there will be interest, and this is an effort at identifying some of the top landing spot. Several possible teams (like Ravens, Dolphins, Rams and Lions) are also teams to monitor for Haden. With that in mind, here are eight teams that could sign Joe Haden.

Kansas City Chiefs
The Chiefs were not on the original list, because they didn't have the cap space to take on Haden's contract. But that's no longer an issue and when Adam Schefter says you have interest, you're making the list. Kansas City has Marcus Peters, but they mostly ignored the No. 2 CB role this offseason, electing to let several players like Terrance Mitchell and Phillip Gaines battle for the role. Mitchell has missed time and Gaines hasn't made the most of his chance, so adding Haden would take care of that need.

New Orleans Saints
When a defensive player hits the open market, the Saints are often a team with interest. That's what happens when you're trying to win-now, but have an iffy defense. Marshon Lattimore is the future No. 1, while P.J. Williams has upside if he can stay healthy. Delvin Breaux is the most proven CB on the roster, but he's hurt again. Adding Haden gives the Saints a much-needed boost to a secondary that needs it. Much like the Chiefs, the Saints didn't have the cap space to take Haden on in a trade and were linked to Haden by Schefter.

Pittsburgh Steelers
Notice a pattern yet? The Steelers couldn't take on Haden's contract, but were linked to him by Jason La Canfora after his release. Artie Burns is a talented young corner and William Gay is still producing, but isn't Haden an upgrade over Ross Cockrell and Coty Sensabaugh? The Steelers drafted two corners in Brian Allen and Cam Sutton this year, but Haden is a win-now addition.

Dallas Cowboys
Dallas has $13 million in cap space, lost two of their top corners and the secondary as a unit is a concern. Orlando Scandrick is back and so is Anthony Brown, but Nolan Carroll wasn't that great for the Eagles last year and the three rookies (Chidobe Awuzie, Jourdan Lewis and Marquez White) have battled injuries this preseason. The Cowboys have bodies at corner, but if they're worried, a veteran like Haden could help Dallas win now. Dallas was an original trade option, especially since NFL.com had already suggested the idea of the Browns trading Haden to the Cowboys. Clarence Hill, a Cowboys beat reporter, says the team has interest, but they don't want to get into a bidding war.

Indianapolis Colts
I hadn't planned to include the Colts on this list, until the news broke that Vontae Davis will miss multiples games with a groin injury. That leaves the Colts with the likes of Rashaan Melvin, second-round pick Quincy Wilson, fifth-round pick Nate Hairston, Chris Culliver, Corey White and 2016 second round pick T.J. Green (drafted as a safety) as the top corner options. That's a pretty iffy list, especially for a defense that overhauled its pass rush this year. Haden is pricey, but the Colts have the fifth-most cap space right now. With picks no longer needing to be included, G.M. Chris Ballard could have more interest in Haden.

Tennessee Titans
The Titans are in position to make the playoffs this year. Marcus Mariota and the offense should be even better this year and the defense added some new pieces like CBs Adoree' Jackson and Logan Ryan. But the Titans could still use another option at CB for this year and Haden is a potential option. LeShaun Sims and Brice McCain are the other top two options, but Haden, if he can find some of his old form, could be a perfect fit.

Tampa Bay Buccaneers
The Bucs are in a similar spot to the Titans. They're a team on the rise, but could use another corner. The top two options are clear: Vernon Hargreaves and Brent Grimes. There's also Robert McClain and Javien Elliott battling for the nickel role, plus Ryan Smith as the next notable CB. That's not ideal depth and the Bucs could add Haden and make him the No. 3 CB who pushes Hargreaves inside in nickel and dime sets. Plus, Haden went to college at Florida.

Oakland Raiders
The Raiders' inclusion was based around a Sean Smith or Joe Haden trade. That's clearly no longer an option. But I won't just delete the Raiders off this list since they're already on it. If the Raiders really are done with Smith and plan on relegating him to backup and dime duty, adding someone like Haden gives them another outside corner option. If he signs for the cheap, it's a risk worth taking.