5 Teams That Could Sign RB DeMarco Murray This Offseason 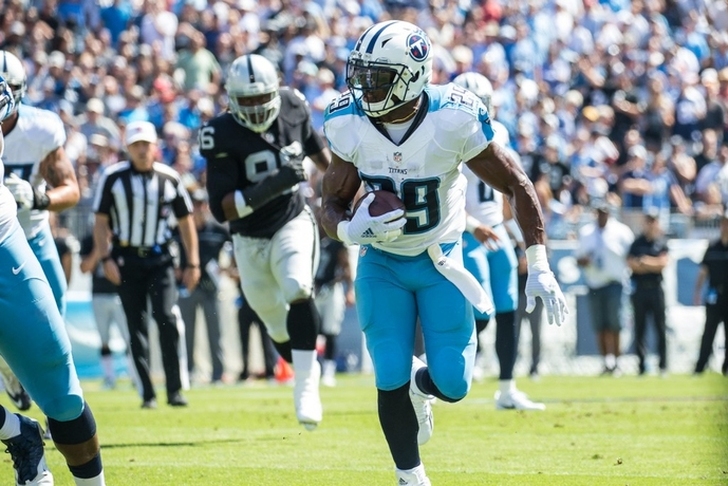 The NFL rumors swirling around what team running back DeMarco Murray will play for in 2018. The Tennessee Titans released Murray on Thursday after two seasons in Tennessee. He is coming off a year where he ran for 659 yards and averaged only 3.6 yards per carry. Murray has played for three different teams in his seven-year career - Cowboys, Eagles, and Titans - and now will be looking for his fourth. He is three years removed from his outstanding 2014 campaign where he led the NFL in rushing yards with 1,845 yards, but since then has declined. Here are the five teams who could sign Murray for the 2018 season:

5.) Indianapolis Colts
Colts running back Frank Gore continues to beat father time, but he will be 35 years old at the start of the 2018 season. The Colts have been rumored to Penn State running back Saquon Barkley in the first round of the NFL Draft, but if they aren't able to draft him, Indianapolis may target Murray. Running back Marlon Mack is more of a scat back and adding a veteran like Murray should help quarterback Andrew Luck.

4.) New York Giants
The Giants have the second overall pick in the 2018 NFL Draft and may target Barkley. If the Cleveland Browns decide to draft Barkley first overall they may need to turn to plan b, which could be Murray. The Giants running game really struggled last season ranking 26th in yards and 28th in touchdowns. The Giants ran the ball only 394 times last season and if they want to take pressure off the offensive line and quarterback Eli Manning, finding a reliable running back would be smart.

3.) New York Jets
Jets running back Matt Forte retired this past week leaving Bilal Powell and Elijah McGuire to handle the load. Powell and McGuire battled injuries last season so adding a running back like Murray may be a good idea. The Jets quarterback option for 2018 is a major question mark so adding a veteran presence to help with that process may be smart.

2.) Seattle Seahawks
Seattle had four rushing touchdowns last season and quarterback Russell Wilson had three of them. The Seahawks focus this offseason should be keeping Wilson upright and easing the pressure off his shoulders, a solid running game would do just that. Seattle had one of the worst offensive lines in the NFL allowing 43 sacks because defenses didn't respect their running game. Adding a veteran like Murray who is a downhill runner would be a nice fit in Seattle.

1) Detroit Lions
How long has it been since the Lions had anything resembling a good rushing attack? They haven't had a 1,000-yard rusher since Reggie Bush in 2013 and haven't had a back pick up 100 yards in a single game since Thanksgiving in 2013. The Lions may try to find a more cost-effective option in the draft, but they'll certainly look to address the need.