4 Teams That Could Trade For S T.J. Ward 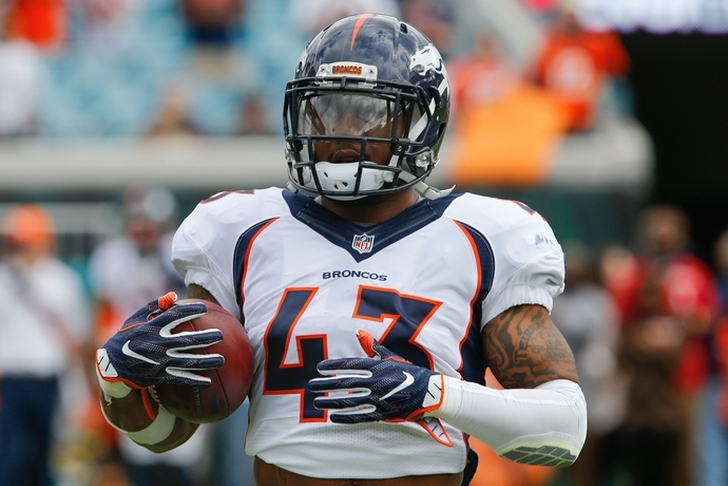 The Denver Broncos are just one season removed from a Super Bowl title, but they could deal a key piece of their defense. The latest trade rumor is that the Broncos are open to dealing strong safety T.J. Ward. A hard-hitting run stopper, Ward has racked up 224 tackles, five sacks, five forced fumbles and three picks in 41 games over three years with Denver. If the Broncos do want to trade Ward, there will be interest from other NFL teams.

Ward is in the final year of his contract, which is likely a reason why the Broncos are open to shopping him. The original report said the Broncos were taking calls, but Pro Football Talk reports the Broncos are actually the ones making the calls to opposing teams. Either way, there's at least a chance the Broncos trade him. He'll bring back some value, but it might not be as much as some think for a three-time Pro Bowler, even if he might actually be (slightly) on the decline. The end return in a trade might be another player (Denver could use some 3-4 DL help) or a mid-round pick.

Ward is a strong safety with coverage issues, something most NFL teams already have. Yes, Ward is an upgrade over plenty of strong safeties, but it's not a role as valuable or as rare as a true coverage free safety. Some teams (like the Dallas Cowboys) typically don't even value strong safeties very much. And given that Ward is in the final year of his deal and already 30 years old, rebuilding teams (like the Cleveland Browns) likely won't have any real interest. With that in mind, here are four teams that could trade for S T.J. Ward.

Minnesota Vikings
The Vikings have an incredible free safety in Harrison Smith, but Andrew Sendejo can be upgraded. He's not getting paid a ton (about $3 million this year), so the Vikings can move him into the No. 3 safety role if they added Ward. The combo of Ward and Smith would be among the best the NFL and make one of the top defenses in the NFL even better. The Vikings could offer a mid-round pick or send over a defensive lineman: Minnesota is high on multiple players, including backups.

Los Angeles Rams
Unlike the other teams on this list, the Rams aren't exactly in "win-now" mode. But, Ward is still very much a fit for the Rams. After all, Wade Phillips is their new DC, coming over from the Broncos. Ward would be a big upgrade over Maurice Alexander, who might be more of a backup-caliber talent anyway. Ward and FS LaMarcus Joyner are a quality combo and Ward shouldn't need any time getting up to speed in the defensive scheme.

Houston Texans
The Texans' question marks at quarterback get all the attention (and understandably so), but don't forget about the safety position. Andre Hal is back at free safety, but multiple players could get snaps at strong safety and the Week 1 starter spot is still up for grabs. But adding Ward to help solidify the back end would be a huge boost for Houston and take care of the SS question mark. The Texans are limited on draft pick compensation thanks to trades with the Browns, but could offer some type of Day 3 pick to Denver.

Carolina Panthers
Carolina signed Mike Adams this offseason, but Ward gives them a better true strong safety option. Carolina frequently lets their SS do more in coverage than should be asked of Ward, but he'd give them another run-stopper. If used correctly, Ward would be an upgrade at safety. At age 36, Adams might be better off as a third safety anyway. Kurt Coleman can stick in the free safety role with Ward in Carolina.