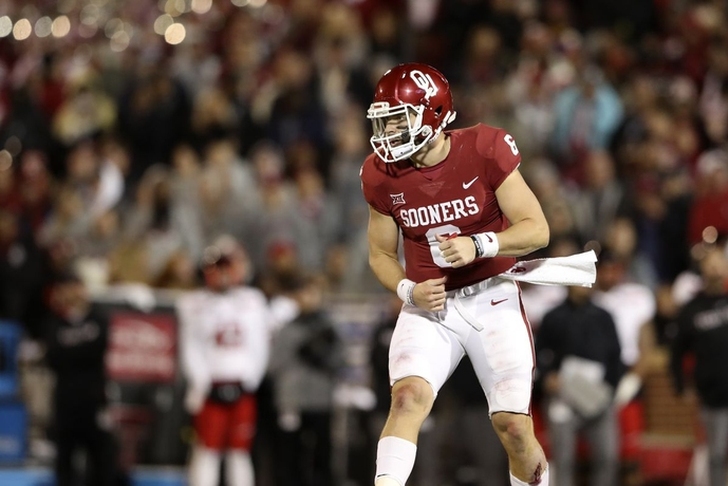 Oklahoma Sooners quarterback Baker Mayfield became the first ever former walk-on to the win the Heisman trophy this past season, yet his diminutive size, spread offense, and off-field antics raise a number of concerns. However, he is so skilled and so talented that he's pretty much a lock to be a top 10 pick - or at least be one of the four quarterbacks taken early on in the NFL Draft.

Where will he land? Here are the three teams that are the most likely to draft him:

1) Denver Broncos
Denver seems to love Mayfield after they got an up-close look at him at the Senior Bowl. Mayfield's accuracy and body of work outweigh those concerns for the Broncos. They also signed Case Keenum this offseason, another shorter quarterback, who can hold down the fort until they feel Mayfield is ready to take over the reins of the offseason. If he's on the board, don't be surprised to see Denver take Mayfield at No. 5.

2) New York Jets
However, there's a solid chance that Mayfield doesn't make it the Broncos at No. 5. The Jets need a quarterback and have been linked to him - the nickname "Broadway Baker" has already taken hold amongst fans - but in reality, they haven't yet decided on which quarterback they want to take at No. 3 overall. Mayfield is still very much in that mix and if two other quarterbacks are taken with the first two picks, New York could pull the trigger.

3) New England Patriots
The New England Patriots are interested in trading up to take a quarterback in the first round of the draft, and if they do, it will likely be for Mayfield. They apparently have an "affinity" for the Sooners quarterback and have been acquiring picks (they now have two first-round picks and two second-round picks) in order to trade up. Are they willing to pay the hefty price it will take to move all the way up to take Mayfield? That remains to be seen. But they are interested.