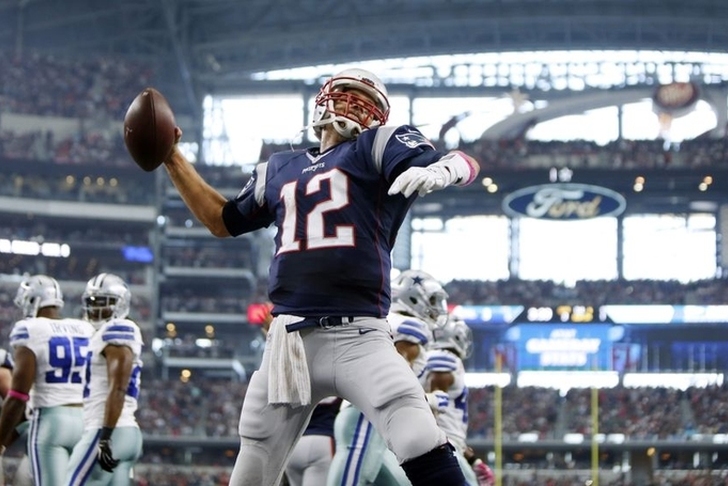 The NFL season just came to a spectacular conclusion with the New England Patriots pulling off the largest comeback in the Super Bowl history. While them and their fans are celebrating the victory, it's never too early to start looking forward to next season for the rest of us. Here's our way-too-early Power Rankings for the 2017 season:

32. Cleveland Browns
Cleveland will get some help thanks to have two of the top 12 overall picks in the NFL Draft - including the No. 1 overall selection - but still have way too many holes to fill in their roster. They will be in this spot all year.

31. San Francisco 49ers
San Francisco's roster is competing with Cleveland's for the worst in the league, but have a few more veterans that give them the slight edge.

30. Los Angeles Rams
Jared Goff is a disaster, but they still have Todd Gurley and a solid defense. However, Sean McVay has his work cut out for him.

29. Chicago Bears
Like most teams in the bottom five, the Bears have a major quarterback question and need to improve defensively. They do have some talented pieces but are in the midst of a complete rebuild.

28. Jacksonville Jaguars
The Jags have a lot of young players who appear to show promise, but took a huge step back this past year. Is Blake Bortles really the answer at quarterback?

27. New York Jets
The Jets are bad and they're old, meaning they don't have a lot of hope of turning it around anytime soon.

26. Los Angeles Chargers
The Chargers lost another season to injury in San Diego, but don't have a lot of promise for the 2017 season as they move to a new city.

25. Indianapolis Colts
Andrew Luck is this team's only bright spot. New GM Chris Ballard has his work cut out for him.

24. Philadelphia Eagles
Philadelphia isn't the team we thought they were at the start of the 2016 season, but their future is bright with Carson Wentz under center. However, they're still a year or two away from being really good.

23. New Orleans Saints
Drew Brees is still elite and the offense can score with anyone. But that defense needs to get much, much better in a hurry.

22. Buffalo Bills
The Bills have weapons and some talent on defense, yet need to be more consistent. They also need to figure out the quarterback position.

21. Houston Texans
Houston's defense is amazing, and will be even better next year with a healthy J.J. Watt. Running back Lamar Miller and wide receiver DeAndre Hopkins are great weapons, but can they get anything resembling good quarterback play?

20. Detroit Lions
Matthew Stafford and the offense pulled plenty of rabbits out of the hat at the end of games last year. Their chances of winning that many close games again are slim - and defense is still a big concern.

19. Arizona Cardinals
Arizona's defense has holes and aging weapons on offense. They are trending downward.

18. Cincinnati Bengals
These Bengals simply aren't the team of the past few years. Their offense can't move the ball consistently, and their defense is like Swiss cheese.

17. Miami Dolphins
Miami seemed to find their stride in the second half last year. But is that who this team really is? Can Ryan Tannehill continue to play at a high level? We'll see.

15. Minnesota Vikings
Again, the Vikings have a championship-level defense. Improving the offensive line is a must.

14. Tennessee Titans
Tennessee is trending up. Marcus Mariota looks poised for a breakout year, their running game is dynamite and they have playmakers on defense. The Titans should expect a playoff berth next season.

13. Carolina Panthers
Carolina still has all the key pieces of the team that made the Super Bowl in 2015. Everything seems to be leaning towards a bounce back year for Cam Newton and the Panthers.

12. Tampa Bay Buccaneers
Speaking of players preparing for a breakout season, Jameis Winston certainly fits that category. If they can find defensive consistency, look out.

11. Washington Redskins
Assuming they re-sign Kirk Cousins, Washington's offense will be fine. Improving the defense is a must to compete in the NFC, however.

10. Kansas City Chiefs
We know the story with the Chiefs - defense is elite, running game is great. But Alex Smith will always hold this team back.

9. Denver Broncos
We know how good the Broncos can be, but need to find something concrete from the quarterback position.

8. New York Giants
New York improved their defense last year and have a good passing game. If they can improve their offensive line and running game, they'll be one of the best teams in the league next year.

7. Oakland Raiders
Oakland fell apart after quarterback Derek Carr got hurt. However, their young core of stars are only getting better. Improving the secondary is a must, but the Raiders will be very, very good.

6. Green Bay Packers
Green Bay's late-season surge showed how good this team can be. Once healthy, they'll be an elite team again.

5. Seattle Seahawks
The Seahawks are very, very close to having a complete roster. Finding upgrades along the offensive line and getting healthy on defense will make them the title contender they are.

4. Pittsburgh Steelers
A promising young defense with experienced, elite weapons on offense. With Martavis Bryant back next year, this team could be a juggernaut.

3. Dallas Cowboys
Dak Prescott and Ezekiel Elliott should be better in their second year. The defense's weaknesses should be upgraded in the offseason. Look out for the Cowboys in 2017.

2. Atlanta Falcons
The Super Bowl told you how good this team is and will be. Their defense is full of first- and second-year players that are still reaching their potential, and the offense is unstoppable. They'll compete for the Super Bowl again next year.

1. New England Patriots
New England still runs the NFL as long as Tom Brady is under center. And with Rob Gronkowski coming back healthy next year, the road to the Super Bowl will likely go through Foxborough again.