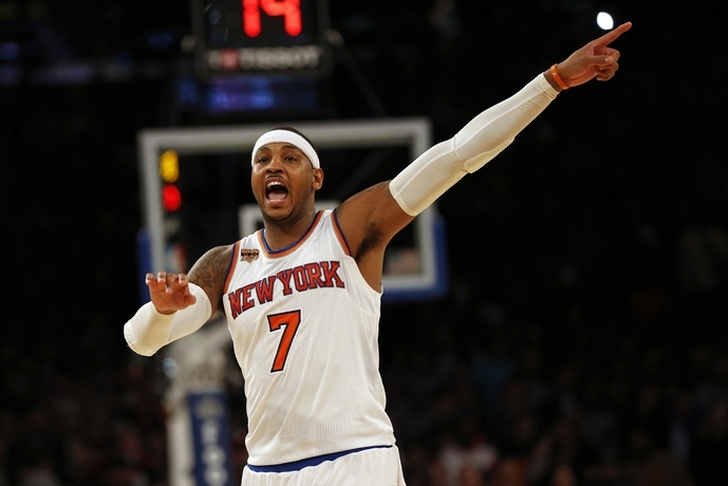 Carmelo Anthony still expects the New York Knicks to trade him. While the new regime wants to try to pitch Anthony on staying, the forward still expects to be dealt.

"As New York Knicks president Steve Mills and general manager Scott Perry pursue a meeting with Carmelo Anthony in the coming days, league sources told ESPN that the 10-time All-Star is counting on the franchise to carry out its previously agreed upon mandate to trade him to the Houston Rockets," Adrian Wojnarowski reports. "Whatever stance a post-Phil Jackson front office is taking now, Anthony expects the Knicks to resume trade talks soon and honor the franchise's long-standing goal to rebuild without him, league sources said."

"According to an executive of one of the four teams involved in the proposed trade, all sides, including Anthony, are frustrated over reports that Knicks president Steve Mills is having second thoughts," Isola writes. "In fact, ESPN reported that the Knicks want the chance to talk to Anthony about possibly remaining in New York, which at this stage in the process seems highly unlikely.

"'That’s crazy,' a source told the News. 'From what I understand Carmelo is under the belief that he’s going to the Rockets. That’s what the Knicks have been telling us: that they’re trading him. I can’t imagine that after all he went though last season with Phil (Jackson) he’s happy with this.'"

The Rockets and Knicks have had issues working out a trade, in large part because of the salaries. The Rockets need to include Ryan Anderson in a deal, but New York (and no other team) apparently wants him.

Follow our New York Knicks team page for all the latest Knicks rumors or download the Chat Sports App!