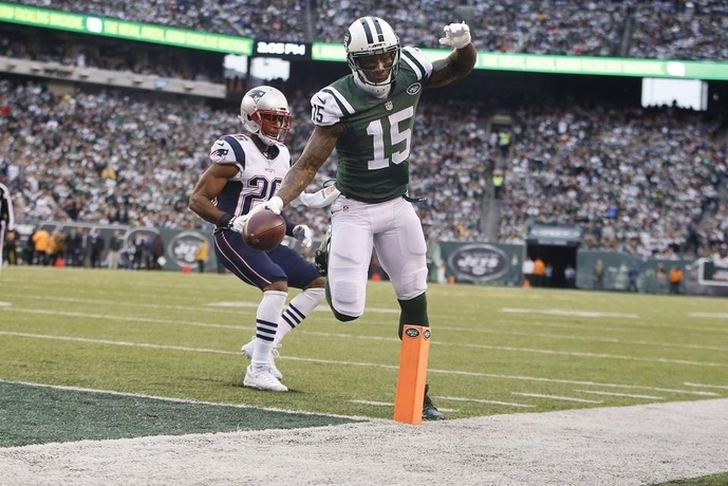 The New York Jets picked up a crucial win over the New England Patriots today as quarterback Ryan Fitzpatrick's six-yard touchdown pass to Eric Decker in overtime gave them their 5th straight victory. Here's some notes, quotes and observations from the day in MetLife Stadium.

There was a lot of controversy surrounding the coin toss at the start of overtime. New England won the toss, but special teams captain Matthew Slater chose to kick off after misinterpreting what the referee said. The Jets then got the ball first and scored a touchdown, giving them the win.

New York dominated this game from start to finish, outgaining New England 428-284 while limiting the Patriots to just one third-down conversion.

The Jets now control their own destiny in the AFC. New York will get a wild card spot if they win in Buffalo next week OR if the Steelers somehow lose to the Browns in Week 17.

"It was thrilling. Those are the moments that you cherish." - Decker on his game-winning touchdown catch.

"I just thought we would be able to choose the direction we kicked off from." - Slater on botching the overtime coin toss.

"The last five weeks, they've all kind of been do-or-die games for us, so that's how we've approached each one. We've got to get the next one to get in and that's how we'll view it. This is a fun run." - Fitzpatrick on the Jets' winning streak.

The injuries are finally starting to catch up to the Patriots. New England didn't score an offensive touchdown until there was 1:55 remaining in the game, showing how limited this team is at the moment. They're without their top two running backs, top two wide receivers Julian Edelman and Danny Amendola, and lost two more offensive linemen. As a result, we finally saw a real crack in their offense that could hinder them going forward.

New York looks like a team that could do some seriously damage in the playoffs as they're peaking at the right time. Their defense has given up 20 points or less in each of their last five games, while the offense is hitting it's stride under Fitzpatrick, putting up 23 points or more in four of their last five games. And, considering that all of the projected top four seeds are dealing with major injury issues, the Jets' health could be a huge positive for them.