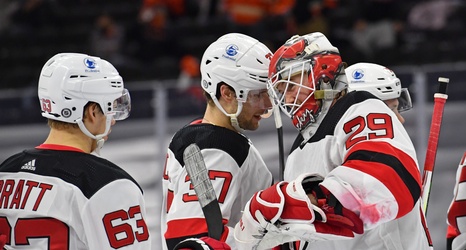 TORONTO, ONTARIO - AUGUST 04: Mitchell Marner #16 of the Toronto Maple Leafs warms up prior to Game Two of the Eastern Conference Qualification Round against the Columbus Blue Jackets prior to the 2020 NHL Stanley Cup Playoff at Scotiabank Arena on August 04, 2020 in Toronto, Ontario, Canada. (Photo by Andre Ringuette/Freestyle Photo/Getty Images)

The New Jersey Devils are looking for ways to make their team better this offseason. They have a budding core thanks to some good drafting and a little bit of luck. They won the draft lottery twice and that landed them with Nico Hischier and Jack Hughes, both of which are impressive young centers.