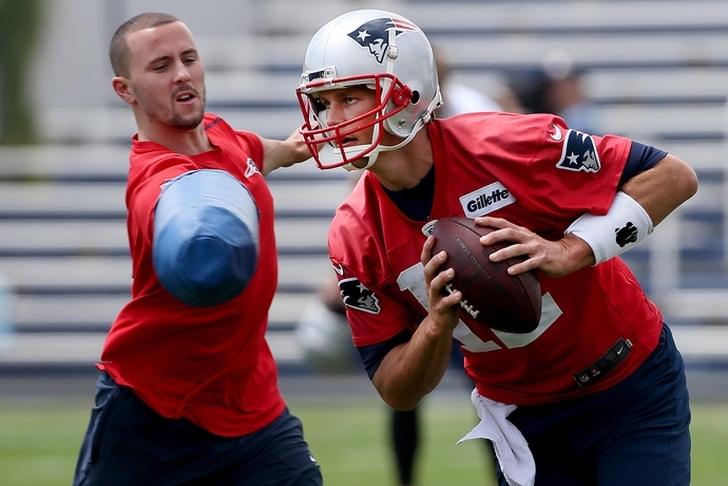 OTAs are nearing their conclusion around the NFL, which means it's time to take a look at how the New England Patriots depth chart currently stands. The Patriots aren't done making moves, they could still sign a player or two and there are roster cuts before the season, but this is a projection of how the depth chart currently looks.

Not every player on the roster will be listed since there's no real need to include UDFAs who won't make the team. Instead, think of this as an expanded two-deep depth chart. And, with fall camp yet to begin, much can and probably will change. With that in mind, here's the current Patriots depth chart projection to make the 53-man roster:

New England typically only carries two quarterbacks and neither of these players are a surprise. Both are locked into their roles (shocking, I know).

In reality, all four of these backs should see a somewhat equal distribution of playing time, which the Patriots love to do. However, it will be interesting to see how much of that share Michel is able to earn as a rookie.

New England will likely only keep one fullback on the roster and that's Develin.

This is a pretty deep group of receivers for Tom Brady, though they lack a bigger possession receiver in the group. Edelman and Hogan are the only two players who are guaranteed playing time, however.

This group will rotate the same as it has been - Gronk is the starter and will be on the field all the time when he's healthy while Allen will be mixed in several two tight end sets.

This unit needs to keep Brady upright but they didn't make any huge additions to this group in the offseason. Still, though, they're a solid group. Expect first-round pick Isaiah Wynn to be a starter by the end of the season.

Are you a die-hard NFL? If so, SUBSCRIBE to Chat Sports on Youtube breaking down the latest NFL news and rumors!

This was the area the Patriots really addressed in the offseason, signing pass-rushing menace Adrian Clayborn and trading for massive defensive tackle Danny Shelton. Expect this group to be a strength for the Patriots.

Sam and Bentley are rookies that will provide depth but both linebacker slots are locked in as Van Noy's and Hightower's.

Chung and Devin McCourty have been as reliable a safety tandem as there has been in the league, and they added Jason McCourty to serve as the cornerback opposite Gilmore. Harmon will play a hybrid role.