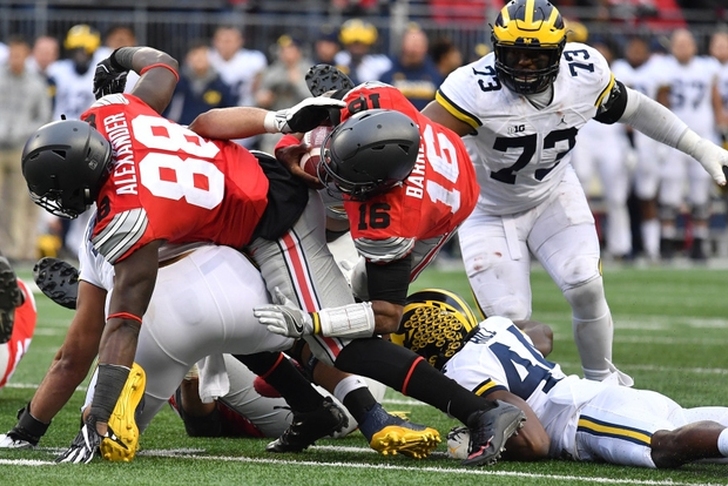 The 2017 college football season doesn't start for several months and spring practice hasn't even started yet. However, we're already pining for the return of Saturdays full of football.

We've compiled the top games for next season below, with added emphasis given for the ones that could have an impact on the College Football Playoff situation. Full warning: it's shaping up to be another great season full of incredible games. With that in mind, let's get to the 15 best college football games Of 2017:

15) Ole Miss Rebels at Alabama Crimson Tide - Sept. 30
Ole Miss has played Alabama as well as anyone over the last three years, winning two in a row before nearly pulling off the upset again in 2016. The Rebels don't have the highest expectations next season, but given their history against the Tide, this will be a game worth watching.

14) Michigan Wolverines at Wisconsin Badgers - Nov. 18
One week before hosting Ohio State, the Wolverines travel to Camp Randall to take on Wisconsin. This will easily be the Badgers' biggest game of the year and their best chance to prove their worth to the selection committee.

13) Washington Huskies at Stanford Cardinal - TBD
The last two Pac-12 champs will be meeting at a date that has yet to be determined, but it will be held in Palo Alto. Led by returning quarterback Jake Browning, Washington will be the heavy favorites to win the conference again. However, David Shaw has built a dominant program that is sure to re-load.

12) Oklahoma Sooners vs. Texas Longhorns - Oct. 14
With new head coach Tom Herman in tow and an abundance of young talent, Texas seems primed to have a breakout year in 2017. Oklahoma is a favorite to return to the College Football Playoff, but the Longhorns have played them well each of the last two years, upsetting them in 2015. You never know what can happen in a rivalry game.

11) Texas Longhorns at USC Trojans - Sept. 16
This is when we will likely find out how good Texas is. They hit the road for an early season matchup in Los Angeles, facing off against a USC squad that will be ranked in the top five in the preseason. Trojans quarterback Sam Darnold also goes into the new season as one of the Heisman favorites.

10) Louisville Cardinals at Florida State Seminoles - TBD
Speaking of Heisman favorites, Lamar Jackson is back and could win this award for the second year in a row. Louisville has to replace a lot of starters from their 2016 team, but Jackson is capable of winning a game by himself - something Florida State knows all to well. On the flip sides, the Noles have more returners than pretty much everyone else in the country and will be ranked in the top three in the preseason. Could they slip up in this game?

9) Alabama Crimson Tide at Auburn Tigers - Nov. 25
Auburn's defense and running game have always been good. Now, they're getting a top quarterback in Baylor transfer Jarrett Stidham. His ability to fit this system could make Auburn a surprise team in 2017, making them a tough test against Alabama - especially since that game is at Auburn.

8) Michigan Wolverines at Penn State Nittany Lions - Oct. 21
Penn State became a different team after being blown out by Michigan, and the reigning Big Ten champs what to get revenge for that loss. This game will also likely go a long way in determining the Big Ten East champ.

7) Clemson Tigers at Louisville Cardinals - TBD
Remember when Louisville was just yards away from upsetting Clemson in Death Valley this year? The Cardinals certainly do. And when Clemson goes to Louisville, it's going to be Clemson's toughest road test of the season.

5) Penn State Nittany Lions at Ohio State Buckeyes - Oct. 28
Penn State's win over Ohio State catapulted them to the Big Ten title, and it was the Buckeyes' only loss during the regular season. They made the College Football Playoff in spite of that loss, but you know Urban Meyer & Co. want revenge. This will be a heated game with a rivalry-like atmosphere - both teams should be ranked in the top 10 preseason and the winner should have the inside track on the Big Ten East title and a playoff berth.

4) Oklahoma Sooners at Ohio State Buckeyes - Sept. 9
The second of a home-and-home series between these two, Ohio State went to Norman and blew out the Sooners in 2016. Many believe that loss is what kept Oklahoma out of the playoff. Both teams should be ranked in the top five or 10 in the preseason, meaning this will likely have playoff implications again.

3) Ohio State Buckeyes at Michigan Wolverines - Nov. 25
This one needs no explanation. Ohio State and Michigan always play good games, and this one will be especially heated after the way their last game ended. And, since it's in Ann Arbor, Jim Harbaugh and the Wolverines will be expecting to win.

2) Florida State Seminoles at Clemson Tigers - TBD
The defending national champions against the team many are picking to win the national championship next season. Clemson will have the distinct advantage of playing at home, but FSU will be one of the most talented teams in the country. The winner will likely win the ACC and make the playoff.