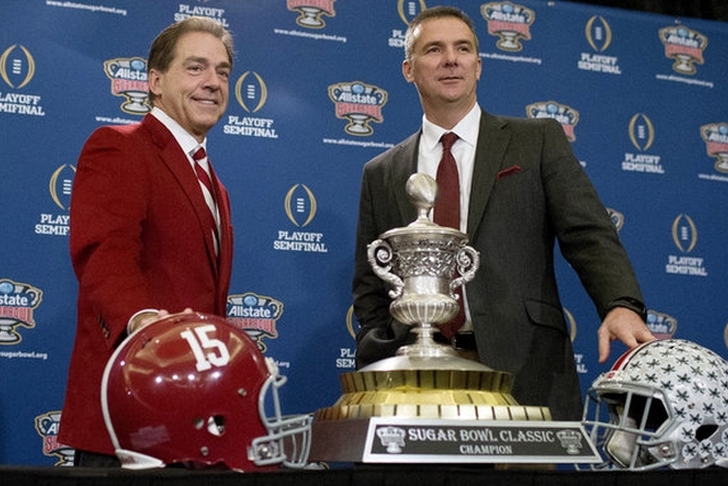 Though the 2016 college football season is still months away, coaching staffs across the country are doing plenty of work this summer to build an excellent 2017 recruiting class. Some have done a better job than others to this point, having already reeled in several top prospects. Here are the top eight recruiting classes in the country, according to 247sports:

8) Miami Hurricanes
Mark Richt's first true recruiting class is setting up to be a good one for the Hurricanes. He's already landed 14 recruits, including five four-star players, and almost all of them are from the state of Florida (11). It's clear they've made recruiting the state a top priority, and it's paying off for them. The top player in the class is four-star OT Navaughn Donaldson, the No. 98 overall player in the class.

7) LSU Tigers
Les Miles has followed up last year's top 3 class with another excellent effort. The Tigers have 12 current commits, including four four-star prospects and one five-star in DT Tyler Shelvin, the No. 25 overall prospect in the country.

6) Florida State Seminoles
FSU finished high in 2016, and are on track to have another strong finish this year. The Seminoles have just 10 players committed, but all of them are of very high quality. Seven of those commits are four-star prospects, but the prize of the class right now is five-star DB Stanford Samuels (who some are comparing to Jalen Ramsey). Expect Florida State to end up with another top class.

5) Michigan Wolverines
Jim Harbaugh continues to work his magic on the recruiting trail, and Michigan will likely only go up in the rankings as we get closer and closer to National Signing Day in February. Of their 14 current commits, five are four-star prospects - but the big name is five-star quarterback Dylan McCaffrey, the top-ranked pro-style quarterback in the country.

4) Georgia Bulldogs
Kirby Smart's first real recruiting class at UGA is shaping up to be elite. Though they currently don't have have five-star commitments (yet), eight of their 11 current commits are four-star prospects, headlined by safety Richard LeCounte III, the No. 2 safety and No. 37 overall prospect in the country. He's one of four commits ranked in the top 100 overall.

3) Oklahoma Sooners
The Sooners finished inside the Top 25 last year, thanks to the Signing Day addition of five-star LB Caleb Kelly, and they're poised to make a big jump in the rankings this year. The Sooners have 15 players already committed, including the top player in Oklahoma in LB Levi Draper. The top recruit, however, is four-star OG Tyrese Robinson, the No. 74 overall player.

2) Alabama Crimson Tide
Another year, another dominant Alabama recruiting class. The Crimson Tide already have 14 commits, including five players that rank in the top 90. The gem of the class is RB Najee Harris, who is the top overall prospect in the country.

1) Ohio State Buckeyes
For as good as Alabama's recruiting class is, Urban Meyer is perhaps putting together a better group in Columbus. Ohio State has 13 players already committed, including a pair of five-star recruits. The first is CB Shaun Wade, the No. 2 CB and No. 13 overall player in the class, while the other is OT Josh Myers, the No. 4 player in the nation and top tackle.