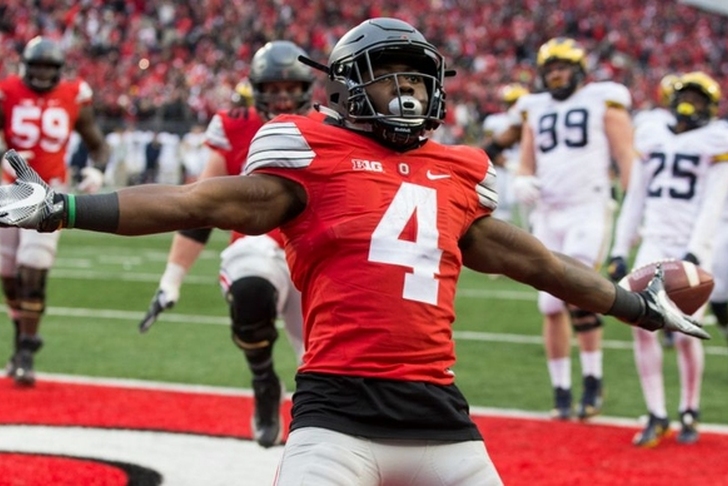 The College Football Playoff Selection Committee is set to release their second-to-last rankings on Tuesday night, but there may not be much controversy. Only won of last week's 10 ten teams lost, and that was Michigan in their controversial defeat at Ohio State. That will create some change at the top of the rankings, setting up an entertaining and pivotal weekend full of conference championship games.

Tune in to Chat Sports Live on Facebook at 7pm ET for tonight's rankings announcements.

Here's who we predict the top 10 of tonight's rankings will look:

10) Oklahoma State Cowboys
Oklahoma State rose into the top 10 last week, and had a bye week before taking on rival Oklahoma in the de facto Big 12 title game on Saturday. The Cowboys need a win to keep any slim CFP hopes alive.

9) Colorado Buffaloes
Colorado clinched the Pac-12 South title with a win over Utah over the weekend, but it wasn't a victory that will boost their stock in the eyes of the committee. They'll get their chance to make a statement on Friday night against Washington in the Pac-12 title game.

8) Oklahoma Sooners
Just like their in-state rivals, Oklahoma had a bye week before hosting Oklahoma State this weekend. They'll stay at No. 8 because of that.

7) Penn State Nittany Lions
Penn State took care of business by beating Michigan State, clinched the Big Ten East title thanks to Ohio State's win over Michigan. If they can beat Wisconsin in the conference championship game, the committee will have a serious conundrum on their hands - PSU would be the Big Ten champs and have the head-to-head win over the Buckeyes. Does Ohio State still get in over Penn State, or do both teams get in?

6) Wisconsin Badgers
Wisconsin also held serve by beating Minnesota to win the Big Ten West. Beating Penn State should catapult them past Michigan and into the College Football Playoff if any of the teams above them falter.

5) Michigan Wolverines
Michigan's loss will drop them out of the top 4. They'll still be the highest-ranked two-loss team in the rankings at No. 5, but I think they wil likely be jumped by the Big Ten champ - even though the Wolverines have head-to-head wins over both teams.

4) Washington Huskies
Washington dominated a ranked Washington State team on Friday, and now have a chance to finally pick up the marquee win their resume is lacking over Colorado. Win the Pac-12 title and the Huskies are in.

3) Clemson Tigers
Clemson benefits from Michigan's loss, moving up one spot. They'll be in if they can beat Virginia Tech in the ACC title game.

2) Ohio State Buckeyes
The Buckeyes virtually clinched a playoff spot with that win over Michigan. They now have wins over the Wolverines, Wisconsin and Oklahoma, with the latter two coming on the road. That resume is enough to get them in the playoff.

1) Alabama Crimson Tide
Alabama continued to roll with a 30-12 win over Auburn, extending their streak to four games without allowing a touchdown. The only undefeated Power 5 conference team, the Tide will clinch the top seed by beating Florida in the SEC Championship Game. However, they will still likely make the playoff even if they lose that game.