MUST WATCH: Top 6 Plays From Alabama's 45-40 Win Over Clemson In The National Championship Game 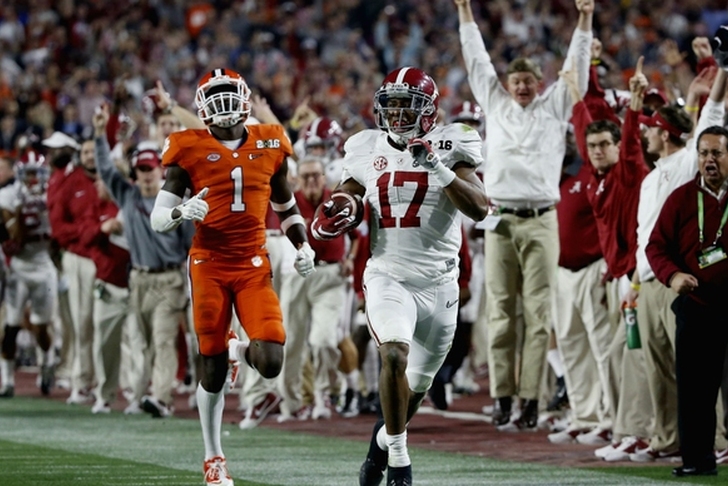 The Alabama Crimson Tide knocked off the Clemson Tigers 45-40 in one of the most entertaining entertaining national championship games in recent memory, providing us with plenty of unforgettable plays. Here are the top six plays from an instant classic:

The second in a string of HUGE plays from Alabama tonight, Howard got into the end zone for the first time all season on this impressive 53-yard catch-and-run.

Henry got Alabama on the board first, surging through Clemson's defensive line and outrunning everyone else on this impressive run.

Clemson started to take control of the game on this play, responding to Henry's 50-yard TD run with this beautiful connection from Watson to Renfrow.

The game was tied 24-24, and Howard's touchdown following Alabama's onside kick (more on that in a second) gave Alabama the lead for good.

Clemson was creeping back into the game as they kicked a field goal to cut Alabama's lead to 28-24, but Drake's return on the ensuing kickoff gave the Tide an insurmountable lead.

After tying the game 24-24 at the start of the fourth quarter, Alabama decided to get tricky and called an onside at the perfect time. The play swung the momentum of the entire game and catapulted the Crimson Tide to the win.