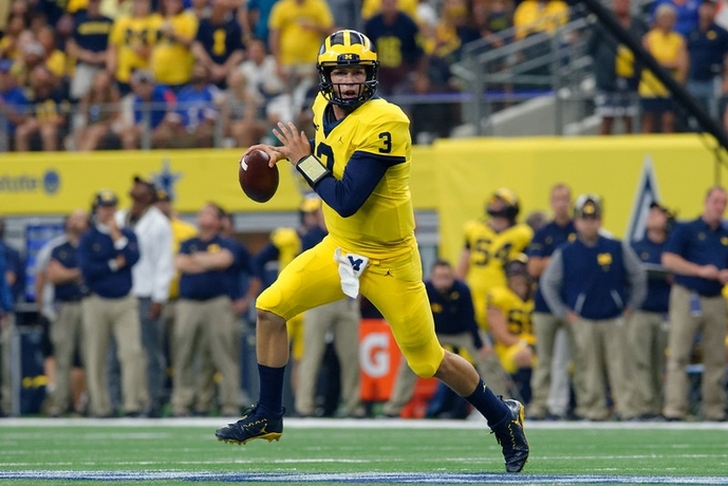 Quarterback Wilton Speight announced that he has left the Michigan Wolverines and will transfer earlier this week, and he will be eligible to play immediately at his new school as a graduate transfer. However, Speight has yet to decide where he will transfer to. Here are his five most likely destinations:

5) TCU Horned Frogs
Kenny Hill - who transferred to TCU from Texas A&M - is finishing his final year of eligibility in Fort Worth, leaving the Horned Frogs with a question at quarterback going into the 2018 season. Speight could be another transfer TCU could have success with, though he's not the dual-threat we've seen them use with Hill and Trevone Boykin before him.

4) Florida Gators
We all know how much of a mess Florida's quarterback situation is, and Feliepe Franks - who struggled massively at times this year - is the only one of their three-man depth chart that will return. New head coach Dan Mullen will be under pressure to win immediately in Gainesville, and while he prefers a mobile quarterback, that desire to win now could have him turn to a veteran and proven winner like Speight.

3) Virginia Cavaliers
Kurt Benkert was a grad transfer from ECU and Bronco Mendenhall will likely bring in another to replace him. Speight is a Richmond, VA native and will likely explore options closer to home. This would be a great match for both parties.

2) Indiana Hoosiers
Indiana is one of two schools that Speight is reportedly looking hard at right now. They have a need at the position going into next season and they would allow him to stay in the Big Ten. Plus, their pass-happy offense would give Speight more to put on tape for NFL teams.

1) Maryland Terrapins
Maryland is clearly the most likely destination for Speight. He knows head coach D.J. Durkin from Durkin's time at Michigan, would get to stay in the Big Ten, play closer to home, and get a starting job. Six different players have thrown a pass for Maryland this year, largely due to injury, and Speight could provide some stability to the position. The Terps check off every mark on his list.