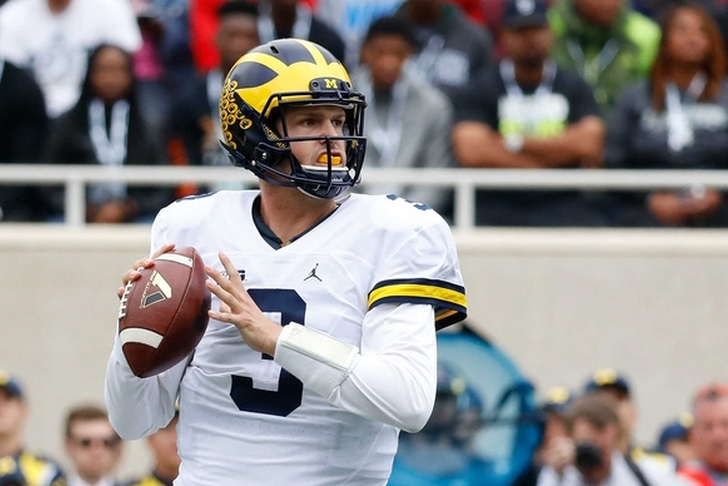 Michigan Wolverines starting quarterback Wilton Speight announced on Instagram that he will be transferring, a day after the regular season ended for the Wolverines.

Thank you, Michigan. These past 4 years have been nothing short of spectacular. Enrolling in January of 2014 as a kid from Virginia i didn’t know what to expect. Four years later i leave a Michigan Man. The amazing memories with my teammates, playing under the best coaches in America, and enjoying everything that this wonderful university and town have to offer- what a ride. To the fans that stuck with us through thick and thin— thank you. To Coach Hoke for giving a kid with no offers a chance— thank you. To Coach Harbaugh for coming in and making me a better man and a better quarterback. For understanding this decision of mine and always having my back no matter what— thank you. I don’t know where next will be, and I’ll use these next four weeks to figure that out. i’m excited to keep pursuing my dreams in a new jersey, but will forever root for the boys wearing the winged helmet. Go blue!

Speight will be eligible to play immediately next season as a graduate transfer.

He began the season for Michigan as the starter but, after suffering a spine injury against Purdue, he missed the last eight games of the season for the Wolverines. Speight did struggle when he was on the field this season, passing for 581 yards and three touchdowns with two interceptions.

Senior John O'Korn originally took over for Speight, but he was replaced by redshirt freshman Brandon Peters, who figures to have the inside track for the starting job next season. Four-star 2017 recruit Dylan McCaffrey, who redshirted this year, is also expected to compete for the quarterback job in 2018.

Check out our Michigan Wolverines team page for all the latest on Michigan Football or download the Chat Sports App!