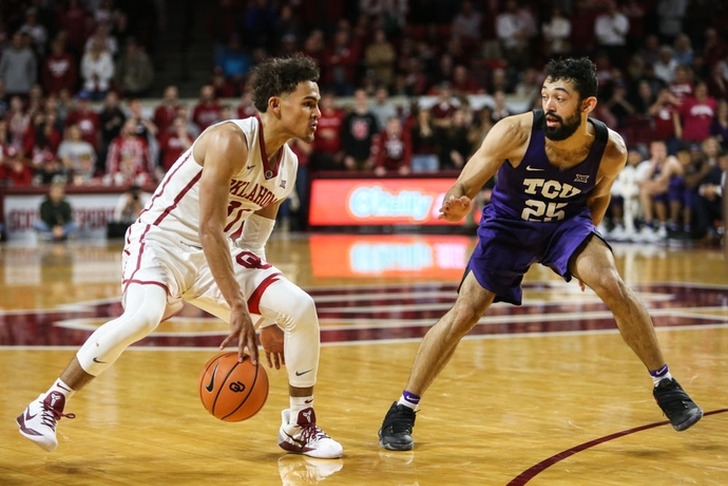 So far this college basketball season, being ranked in the top five has been a curse - and that curse continued this week with #2 West Virginia falling on the road to #8 Texas Tech and #4 Michigan State being upset at home by in-state rival Michigan.

That loss to the Wolverines is just the latest in a recent slide for the Spartans. After rising to No. 1 in the AP Poll two weeks ago (they were never above No. 3 in these rankings), Michigan State has lost to Ohio State and Michigan with an overtime home win over Rutgers sandwiched in between. As such, they are no longer the top-ranked team in the Big Ten.

In an odd twist to what has been a crazy year already, those two games were the only top 25 upsets of the weekend. So, how will all of the past week's games shake up these rankings?? Here are my latest Top 25 Power Rankings:

Creighton was blown out by Xavier on the road this weekend, but that came on the heels of an impressive win over Butler and, because of the losses of other teams, they stay in this week's rankings. Finding some defense to go along with their offense (fifth in effective field goal percentage) will be key for them - but they're an NCAA Tournament lock.

Rhode Island, one of the best mid-majors in the country, has ripped off eight consecutive wins thanks to the nation's 31st most efficient defense and a pair of stars in Jared Terrell (17.6 ppg) and E.C. Matthews (14.2 ppg, 4.4 rpg). They're also incredibly deep with six players averaging at least seven points per game and may very well run the table in a down year for the A-10.

Quietly becoming one of the better teams in the Big Ten, the Wolverines have won eight of their last nine games - and that loss was a one-point home defeat to Purdue due to a questionable foul call. That, plus their win over Michigan State, earns them a spot in the rankings for the first time all season. John Beilein's squad has gotten to this point because of their defense, holding each of their last 11 opponents to 72 points or less.

The Vols are back in the rankings this week after convincing wins over Vanderbilt and Texas A&M this week. They're 12-4 against the nation's second-toughest schedule and all four of their losses came to teams that rank in the top 21 of the RPI. As such, they're No. 13 in the RPI themselves.

Ohio State following up their stunning upset of Michigan State last weekend with 22-point wins over Maryland and Rutgers. They're one of nine teams that rank in the top 30 in both offensive and defensive efficiency according to KenPom.com and Keita Bates-Diop (20.3 ppg, 8.8 rpg) is playing like an All-American right now.

UNC snapped their two-game losing streak with a 30-point win over Boston College and a one-point road victory over Notre Dame. They still have some major problems defending on the perimeter, but their offensive rebounding rate is still one of the best in the country.

What has gotten into Arizona State recently? They're just 2-3 in Pac-12 play with those wins combined by a combined five points. Why? They're a below-average defensive team, don't rebound the ball well, and have an overreliance on the perimeter jumper. They'll find a way to bounce back because of their great guard play, but all of their flaws have definitely been exposed.

Clemson had their 10-game win streak snapped by NC State this week yet rebounded with a big win over Miami on Saturday. A top-12 defense shows that the Tigers are for real but face a stiff test on Tuesday at North Carolina - a place they've never won before.

The Pirates lost by 20 to Marquette this week in a game that really got away from them late and had to come from behind to beat Georgetown this weekend. With a big week ahead (at Creighton, vs. Xavier), Seton Hall needs someone other than their Big 3 of Angel Delgado, Desi Rodriguez, and Khadeem Carrington to step up.

Two more games, who more easy wins for the Zags in conference play. They'll face their first test in a month on Thursday when they host Saint Mary's.

Shai Gilgeous-Alexander (12.4 ppg, 4.4 apg) stepped up to lead Kentucky to two wins this week in Quade Green's absence, averaging 19.0 ppg, 5.5 rpg, and 5.5 apg over Texas A&M and Vanderbilt. They'll face South Carolina on the road on Tuesday - a place they've traditionally struggled - before a showdown with Florida on Friday.

Cincinnati extended their win streak to eight games with a statement win over SMU and an easy win over South Florida. Offense is still a bit of a problem for the Bearcats - no one averages 14 points per game - but their defense is as stingy as ever, ranking third nationally in adjusted defensive efficiency. Thanks to the AAC schedule, they'll really on be tested once (against UCF on Tuesday) for the rest of the month. Cincy won't square off with Wichita State until Feb. 18.

No one is talking about this Auburn team but they should be getting a lot more notoriety than they are. They're No. 6 in RPI, No. 37 in SOS, and are 8-1 against teams ranked in the top 85 in the RPI. Wednesday's showdown at Alabama should be a lot of fun.

Kansas still doesn't look quite right, yet found a way to pick up surprisingly close home wins over Iowa State and Kansas State this week. On the plus side, the Jayhawks are tied for first in the Big 12 and are riding a three-game win streak. On the downside, they beat the two worst teams in the conference by a combined six points and haven't won a game by more than six points since Dec. 21. I'm still waiting for this group to get it all together.

Xavier was badly outplayed by Villanova in Philadelphia on Wednesday, but the Wildcats are so clearly the best team in the country that I can't really knock them for that loss. Trevon Bluiett & Co. rebounded with a 22-point win over Creighton to prove they deserve this ranking.

The Wildcats rebounded from their loss to Colorado with wins over Oregon and Oregon State this week, though neither was overly impressive. Still, they're winning and proved they can win in different ways - they beat the Beavers in an ugly, low-scoring, defensive affair while outlasted the Ducks in a high-scoring shootout.

Something is up with Michigan State given the way they've been playing of late. Miles Bridges has not performed well these last few weeks and the offense has been much less efficient. They'll find a way to get back on track, but right now, the Spartans keep falling.

Duke drops one spot this week through no fault of their own, beating both Pitt and Wake Forest in dominant fashion. Marvin Bagley III (22.5 ppg, 11.7 rpg) continues to be the best player in the country not named Trae Young and had a jaw-dropping 30-point, 11-rebound, four-steal, three-block, and three-assist performance against the Demon Deacons. Defense is still very much an issue for the Blue Devils, but they've only scored less than 84 points once this season (a 78-61 win over Southern).

I think there's a razor-thin margin between teams ranked seventh through third, but WVU ends up in the No. 7 spot after a 57-54 home win over Baylor that was way too close and a loss to Texas Tech. However, we'll see them jump back up if they beat Kansas in Morgantown tonight.

Yes, Texas Tech lost this week at Oklahoma after Trae Young tore them up in the second half, but their win over WVU on Saturday solidified them as a factor in the Big 12 and as one of the better teams in the country. Keenan Evans (17.5 ppg, 3.4 apg) may be the best player you don't know about.

MORE ON CBB: Rauf Report: Chris Holtmann For Coach Of The Year, Why Oklahoma Is More Than Just Trae Young & More Takeaways From The Week Of College Basketball

Wichita State continued to roll with wins over East Carolina and Tulsa this week. Their upcoming stretch against SMU, Houston, and UCF starting on Wednesday will be a good test for the Shockers.

UVA is home to the nation's best defense (again), and that defense has led them on an eight-game win streak. Considering that their only loss of the season came at West Virginia, the Cavaliers could make the case that they have the best resume in the country. I still have questions about their offense against top-end competition, but they're clicking on all cylinders right now.

Purdue found a way to survive in Ann Arbor (thanks to a questionable foul call that went in favor) before absolutely handing it to Minnesota this weekend in an 81-47 victory. They're the only team in the country that ranks in the top 10 in both adjusted offensive and defensive efficiency.

Back-to-back wins over Texas Tech and TCU only strengthen Oklahoma's already incredibly strong resume - and Trae Young's (30.1 ppg, 9.9 apg) National Player of the Year candidacy. He put up 27 points and nine assists against the Red Raiders after starting 1-12 from the field, then went bananas for 43 points, 11 rebounds, and seven assists against the Horned Frogs.

Villanova continues to prove that they're the best and most consistent team in the country. They showed that with a 24-point win over No. 10 Xavier this week, which they followed with a win over St. John's. Jalen Brunson (18.8 ppg, 5.2 apg) and Mikal Bridges (17.5 ppg, 6.1 rpg) should find themselves on All-American teams at the end of the year.