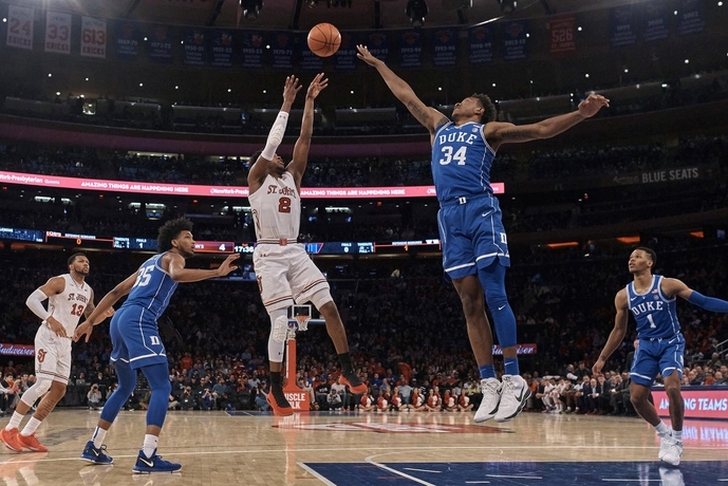 Another weekend in college basketball was highlighted by a series of top 10 upsets, something that has become the norm this season.

St. John's, 0-11 in Big East play this season, upset Duke in Madison Square Garden behind 33 points from Shamorie Ponds in one of the biggest upsets of the season.

"To turn it around against one of the storied programs in college basketball, it feels great," St. John's coach Chris Mullin said after the game. "But it’s probably more important for our players to get that taste back in their mouth."

As for Mike Krzyzewski, he ripped into the Blue Devils after the loss.

"We got what we deserved." Coach K said. "That is not acceptable, so I will do the things that I've done for 43 years to make sure we have an acceptable performance by our Duke team."

Of course, that was not the only notable upset. Kansas dropped their third game of the season at Allen Fieldhouse in an 84-79 loss to Oklahoma State. The Jayhawks, hampered by poor perimeter defense in the first half, trailed by as many as 18 points in the game. Then there was Arizona, who lost to Washington thanks to this shot at the buzzer. The win likely earned the Huskies an NCAA Tournament bid (barring a huge collapse over the next few weeks).

The Zags have rebounded from their loss to Saint Mary's with five consecutive wins, though all have come against much lesser competition. However, watching them play, they seem disjointed on offense and aren't a great defensive team. They look like the perfect candidate to be upset in the first round of the tournament.

My mom, an NC State alum, asked me why I didn't have the Wolfpack in my rankings last week and I joked with her that there's a rule where a team can't have a loss to UNC-Greensboro on your resume and be ranked. If anything, that shows how far NC State has come in their first year under head coach Kevin Keatts. They're 6-2 in their last eight games with wins over Duke, Clemson, and North Carolina.

WVU's loss to Iowa State on Wednesday marked their fifth loss in six games, yet the Mountaineers were able to bounce back with a huge 89-51 win over Kansas State on Saturday. When West Virginia is forced to play in the half court, they really struggle.

Washington's win over Arizona on Saturday has brought some warranted attention to what the Huskies are doing in Seattle. They've won four games in a row following victories over the Wildcats and Arizona State this week, pushing them to 7-3 in Pac-12 play. Remember, they also beat Kansas on a neutral floor earlier this season.

Nevada flexed their muscle as one of the top teams in the country with convincing wins over Fresno State and Colorado State this week. Caleb Martin (19.8 ppg, 5.3 rpg) is capable of leading this team to the second weekend of the NCAA Tournament.

The Pirates quietly had a pretty solid week. They blew out Providence on Wednesday before playing even with Villanova for 30 minutes in Philadelphia on Saturday before the wheels fell off.

Kentucky couldn't pull off their third straight double-digit comeback on Saturday in a loss at Missouri. These slow starts UK has had over the last week and a half have been caused by a lack of aggressiveness and energy on both ends of the court - which can't happen when they struggle shooting the three like they do. We've seen them wait and turn it on in the second half, but that's not something the Wildcats can rely on consistently.

The Wolverines overcame slow starts this week to beat both Northwestern and Minnesota at home as they're starting to round into form. They're 12-3 in their last 15 games.

I thought Clemson was done following Donte Grantham's season-ending injury, but all the Tigers have done is won their last three games, including a home victory over North Carolina. They're proving to be one of the more consistent teams in the country.

The Gaels have won 18 consecutive games since dropping back-to-back games to Washington State and Georgia during Thanksgiving week. I'd like to see their defense improve (though their lack of athleticism may keep that from happening) even though their offense (fourth nationally in adjusted offensive efficiency) is good enough to carry them, led by All-American candidate Jock Landale (22.8 ppg, 10.8 rpg).

Tennessee has won five games in a row and had two of their most impressive performances of the season this week with a 23-point win over LSU and a 33-point win over Ole Miss. They'll face a big test on Tuesday when they face Kentucky in Rupp Arena.

We know the deal with Oklahoma by now. They will beat everyone at home, but their defensive struggles really show themselves on the road, as they've lost their last five games away from Norman. However, Trae Young (29.8 ppg, 9.7 apg) is still running away with the National Player of the Year race.

Rhode Island, perhaps the best mid-major in the country, has now won 14 games in a row and are undefeated in A-10 play. Their experience, defense, and guard play give them all of the ingredients of a team that will reach the second weekend of the NCAA Tournament.

Ohio State continues to rack up the victories, beating Indiana and Illinois this week with their biggest test of the season coming up at Purdue on Wednesday. Keita Bates-Diop (20.2 ppg, 8.9 rpg) has solidified himself as the Big Ten Player of the Year favorite.

There's no denying how disappointing that St. John's was for Duke. Their defense problems were exposed by the Red Storm's athleticism (particularly that of Ponds) and they didn't play hard for most of the game. At this point, they are who they are. Duke needs to play more zone defensively, turn the ball over less (18 vs. St. John's), and for Greyson Allen to break out of his slump (averaging 9.9 ppg in 2018).

Was the loss to Oklahoma State a big deal for the Jayhawks? Absolutely. They're now tied for first in the Big 12 with Texas Tech (who they've already lost to at home) and have three true home losses in a single season for the first time in what feels like forever. However, Kansas largely fixed their defensive problems in the second half and showed a lot of fight - they just dug themselves too deep of a hole to climb out of. I think they'll be fine.

Cincinnati 's tournament resume isn't great - their best RPI wins are over Buffalo and Temple - but their defense carried them to convincing wins over both Houston and UConn this week. They keep rising because of that defense.

The Red Raiders continue to win, beating Texas in an overtime thriller before handling TCU on the road this weekend. With their defense and the offensive play of Keenan Evans (18.6 ppg, 3.5 apg), Texas Tech is really looking like a Sweet 16 team.

Auburn is running away with the SEC with easy wins over Ole Miss and Vanderbilt this week. They have a top 10 offense and top 25 defense according to KenPom, making them one of two teams (Purdue) that can claim that.

It was only a matter of time until Arizona got bit late in a game after surviving a number of close calls over the past few weeks. The Wildcats are still one of the better teams in the country but won't make a long tournament run unless their defense (106th in adjusted defensive efficiency) improves.

MORE ON CBB: Rauf Report: National Player Of The Year Race, Why Virginia Is Different This Year & More Takeaways From The Week Of College Basketball

Xavier survived closer-than-expect games against St. John's and Georgetown this week, but they still managed to stretch their win streak to six games. Now comes another tough week that features road games against Butler and Creighton. Trevon Bluiett (19.2 ppg, 5.6 rpg) is playing like the All-American he is.

Admittedly, Michigan State is only this high because everyone else keeps losing. They only have one RPI win over a top 50 team (North Carolina), yet have found a way to continue to win even when they don't play their best. Are they for real? We'll find out Saturday when they host Purdue.

Purdue showed their grittiness by holding off furious rallies from both Maryland and Rutgers this week, though both games were closer than head coach Matt Painter's club would have liked. This week will determine the legitimacy of Purdue's lofty record - they host Ohio State on Wednesday and play at Michigan State on Saturday.

When healthy, Villanova is the best team in the country. But, without Phil Booth, they have depth concerns. Their starting lineup was good enough against Creighton and Seton Hall this week, but their bench combined for a total of 21 points in those two games.

UVA has stretched their win streak to 14 games with double-digit wins over Louisville and Syracuse. With their offense playing as well as it has been of late as well, the Cavaliers are virtually unbeatable.