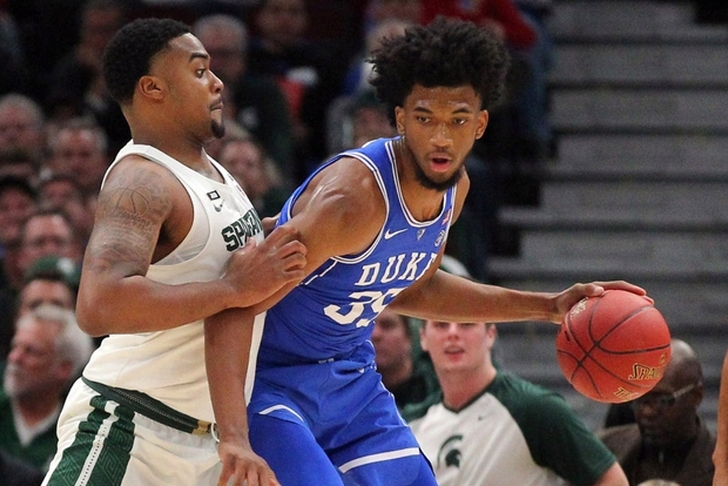 The college basketball continues to be absolutely wacky has two top-five teams fell to unranked teams over the weekend, while West Virginia suffered their second consecutive defeat to Kansas on Monday and Oklahoma, another top four team, was blown out by Kansas State on Tuesday. The schedule is now ramping up in 2018, and as such, there are plenty of questions facing a number of teams around the country. We're going to be posting these every Wednesday now throughout the course of the season to try and help answer those questions. Hit me up on Twitter or Facebook if you want to join the conversation! Now, let's get into it:

Do we need to legitimately worry about Michigan State? Or will they be fine by tourney time? - @Ppuro31
I don't think we need to worry about Michigan State. Miles Bridges has been struggling but he's too good not to figure it out. This is a weird stretch where they're simply not playing that well - there isn't one thing dragging them down. They'll be fine by tourney time, but that said, they still need to turn the ball over a lot less to make a run for a championship.

What has changed with Louisville since Kentucky loss? - Courtesy Hertel (@BenHertel)
The biggest thing for me is their offensive execution and efficiency. Scoring was really a struggle for them, especially in the half court, and they're getting much better at that and much more comfortable in Dave Padgett's offense. I think we're in the midst of a real turning point for them with comeback wins over Florida State, Virginia Tech, and Notre Dame.

We are starving for reliable news about the Billy Preston situation at KU. - Afiba Johnson (@afibaafrica)
This continues to be a lingering question with Kansas. Four-star forward Silvio De Sousa was cleared by the NCAA last week after finishing high school courses at IMG Academy in the fall semester, but five-star forward Billy Preston has been held out by Kansas due to eligibility concerns due to questions about a car.

With Preston, this Kansas team could be extremely dangerous. They expected to get him back for the start of conference play, but everything has been really quiet since then. I don't have any concrete evidence of this, but my thought is that he won't play for the Jayhawks this year unless anything drastic changes. He'd be cleared by now if there was concrete evidence of there being no wrongdoing involved.

Is Bagley the most NBA ready big man since KAT? - Logan (@hulkLOGAN93)
Easily. Karl-Anthony Towns was the No. 1 pick in the 2015 draft, and Lauri Markkanen is the only big man to be drafted since then that is already having a significant impact - and that impact is mostly coming from the perimeter.

Now, I don't want to be a prisoner of the moment, but I think Bagley is a better prospect than Towns. It's easy to have selective memory when it comes to Towns given the skills he has already shown in his NBA career, but he only averaged 10.3 points and 6.7 rebounds at Kentucky. He played better and got stronger as the season went on, but his skillset was essentially a shot-blocker, rebounder, and a deadly jump hook over his left shoulder. His size and athleticism demonstrated oozes of potential that we're now seeing, but he wasn't a bonafide can't-miss guy.

Bagley is a can't-miss guy. He doesn't have Towns' strength, but he has the height and athleticism that makes him a perfect fit for today's NBA to go along with elite level scoring and rebounding ability.

Your top 10 coaches on the hot seat? - Ted Newhard (@Newhardted)
10 is a lot, but we'll go through as many as I think are relevant.

Kevin Ollie is obviously the first guy who comes to mind, and he's gone if UConn doesn't make the NCAA Tournament. Pitt's Kevin Stallings is also expected to be fired at the end of the season.

Those two are virtual locks, then there's the next group of coaches who are certainly feeling the heat in Nebraska's Tim Miles and Iowa's Fran McCaffrey. I don't think either will ultimately be let go, but they are names to watch if their respective teams continue to struggle.

Then, we have to mention the coaches who could get the ax due to the FBI probe in Auburn's Bruce Pearl and USC's Andy Enfield. Pearl is a Coach of the Year candidate for how well the Tigers have performed this year (I have them at No. 13 in this week's power rankings), but he was nearly fired before the start of the season for refusing to cooperate with the school's internal investigation into the FBI's findings. It's a tricky situation there.

I'm curious to see what happens with Enfield. The Trojans have largely underachieved to this point in the year after being ranked in the preseason top 10 and had an assistant coach arrested (Tony Bland), player suspended (De'Anthony Melton) and recruit decommit (Teashon Cherry, who has since committed to Arizona State) after being named in the initial findings. All of that may signal that it's time for USC to part ways with Enfield.

And one mid-major coach to watch - Chris Mooney at Richmond. He's been with the Spiders since 2005, but with a 4-13 record and no NCAA Tournament appearances since 2011, he'll be gone as well.

All mid-major team? - Dave Russell (@Druss1396)
There are a lot of quality mid-major players (excluding teams in the American and Gonzaga) out there, but I'll go with these five:

G - Kendrick Nunn, Oakland
The Illinois transfer is playing incredibly well for the Golden Grizzlies, averaging 25.8 points, 4.7 rebounds, and 4.4 assists per game so far this season. If Oakland finds a way to get into the NCAA Tournament, he's someone who could win a game by himself.

G - Jaylen Adams, St. Bonaventure
St. Bonaventure has a quality 12-5 record with wins over Maryland, Buffalo, and Syracuse, and Adams is clearly their best player, averaging 18.5 points, 4.4 rebounds, and 5.1 assists per game. He'll be a second-round pick in the coming NBA Draft.

F - Kevin Hervey, UT-Arlington
Another mid-major player who is a lock to be drafted, the reigning Sun Belt Player of the Year is putting up insane numbers (20.4 ppg, 8.6 rpg). Hervey and Mavs point guard Erick Neal make up a one-two punch that can compete with anyone in the country.

F - Jock Landale, Saint Mary's
Landale is a double-double machine, averaging 21.7 points and 10.3 rebounds per game. He's deadly in the low post, shooting 65.3 percent from the field, and is clearly the best player on a good Gaels team.

F - Mike Daum, South Dakota State
The 6-foot-9 junior is putting up insane numbers (23.5 ppg, 8.7 rpg) once again for the 16-5 Jackrabbits, is making 2.6 three-pointers per game, and already has seven 30-point games this season.

Best team in the big ten ... next year - Nick Sciacca (@pharmnomenon)
I've touched on this a bit in the past, but I think Maryland will be the favorite in the Big Ten next year - assuming Michigan State's Miles Bridges and Jaren Jackson Jr. go pro as expected.

Maryland has been dealt season-ending injuries to key players (Justin Jackson, Ivan Bender) this season, yet the Terps are actually set up for great success next season. Jackson was projected to be a first-round pick, and while he was likely playing his way into the second round, having him back next year (as is now expected) will give Maryland an unexpected boost. His departure has resulted in sophomores Anthony Cowan and Kevin Huerter taking even bigger roles, and that will pay dividends for them down the road. Same with freshman big man Bruno Fernando, who will see even more minutes in Cekovsky's absence.

Maryland is also set to welcome the nation's No. 11 recruiting class in the fall, headlined by five-star forward Jalen Smith. That will lead to the Terps being incredibly deep and talented next season - fans will just have to wait a little bit.

Thoughts on NCAA considering immediate transfers? - Adam Comarow (@ComarowsCorner)
I like it, especially with the minimum GPA requirement for it. If you're taking care of business in the classroom, you should be able to move freely. We've talked a lot about the hypocrisy of coaches being able to change schools at will while players have to sit out a year, so having this - with the GPA requirement - is good for the sport.

May we see bench player leave for a starting spot somewhere else? Sure, but I don't think it'll be as drastic as many of the detractors think it will. Those players are already transferring - they just now won't be punished for false promises in recruiting or playing for a coach they didn't commit to.