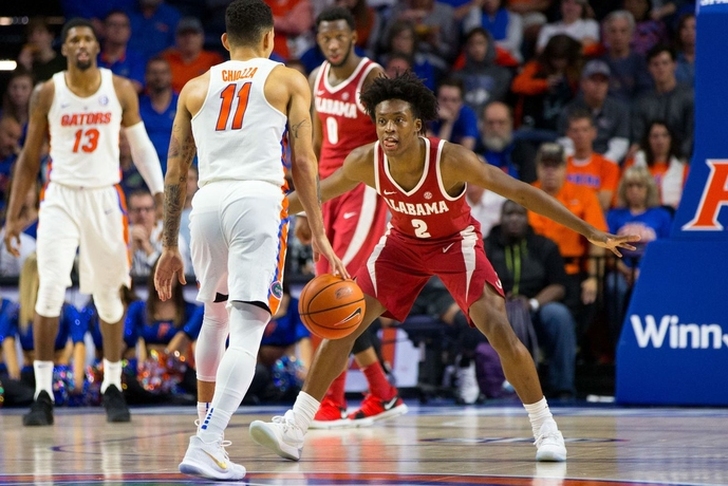 The college basketball season is hitting the home stretch with conference tournaments starting this week, yet with all of the new breaks in the FBI investigation over the past week, there are plenty of questions facing a number of teams around the country as the postseason approaches. We'll continue to be posting these every Wednesday throughout the postseason, so hit me up on Twitter or Facebook if you want to join the conversation! Now, let's get into it:

In no matter what? Suggesting they could lose this weekend and lose in their first conf tourney game - finishing 17-15 - and get in? I don't know about that.

I wanted to include this question in response to my claim that Alabama will be in the NCAA Tournament no matter what because I think the Tide will be one of the more interesting cases on Selection Sunday. A 73-52 loss to Florida on Tuesday was Alabama's fourth loss in a row and dropped them to 17-13 on the season and only 8-9 in SEC play.

Herein lies the conundrum with them. Should they lose Saturday at Texas A&M and in the first round of the SEC Tournament, they'll be 17-15 on the season and 8-11 in the SEC. That doesn't look like an NCAA Tournament team. However, they do have five Quadrant 1 wins, something no other bubble team can say. Those Q1 wins are why I think they're safe, but they couldn't feel comfortable.

@brauf33 will porter play this year At Missouri

Moving to another bubble team in the SEC, Missouri looked like they were going to get a major boost when it was announced last week that projected top-five pick Michael Porter Jr. was cleared to return to basketball activities after missing virtually the entire season following back surgery. However, there are questions as to if he'll actually take the court for the Tigers because 1) he doesn't want to hurt himself again before the draft, 2) it will take time for him to shake off the rust, and 3) Mizzou is an NCAA Tournament team without him.

Ultimately, I think he will play. NBA personnel want to see him play and he's itching to get back on the court - he went through warmups in Tuesday's win at Vanderbilt. However, expect him to be very limited if he does return.

On this week of senior nights, what players make up your All-American Senior team?

Aka, who are your top 5 seniors in the country?

We're going to be a very perimeter-oriented team, but my top seniors are:

Is o neal any good?

This question relates to Shareef O'Neal, Shaq's won, who is a four-star recruit that committed to UCLA on Tuesday after decommitting from Arizona over the weekend following the Sean Miller-Deandre Ayton news.

O'Neal is a very, very good player and will be a major contributor for the Bruins next season as a lengthy forward with perimeter skills, but I don't think we'll see him on any All-American teams or anything like that. He does have a great highlight tape though.

If you could recruit out of one city for the rest of your life for all your incoming players, where would it be? - stuuu (@sturrrt)
This is a great question. I'd choose one of two cities - Chicago or New York City. Both cities produce great talent on a consistent basis and are two of the biggest hotbeds in the country. I feel like Chicago produces a lot of top-tier talent (Anthony Davis, Jabari Parker, Derrick Rose immediately come to mind), but New York obviously has its share as well. I'd take either.