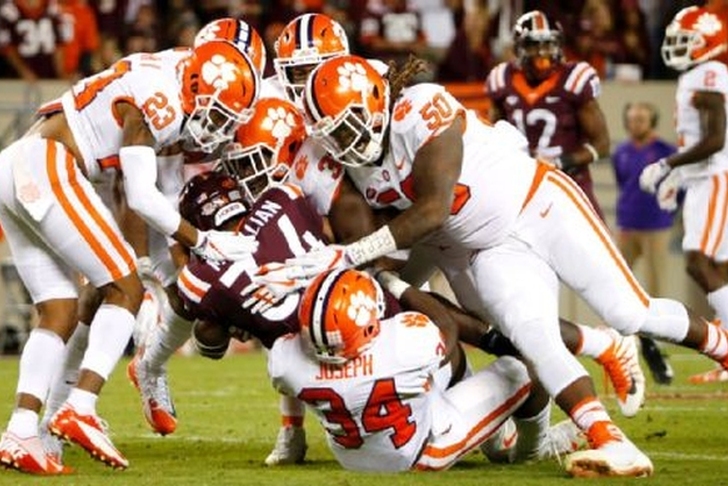 This college football weekend was a bit spread out with a top 16 matchup between USC and Washington State and key ACC showdown between Miami and Duke on Friday night, but there were still plenty of fireworks this Saturday. There were only two matchups between ranked teams, but they were great games. Several players also made major Heisman statements - and one coach is on the hottest seat in America.

We're here to break it all down in this week's College Football Final:

Big games
#2 Clemson dominates in convincing 31-17 victory over #12 Virginia Tech
It's best if you don't doubt this Clemson team.

Facing another tough road test against Virginia Tech, the Tigers passed with flying colors. Clemson's defense held the Hokies without a touchdown until garbage time (one of them came on a three-yard drive after a long punt return) as they flexed their muscle in every aspect of the game.

Quarterback Kelly Bryant led Clemson with 186 passing yards and a touchdown while rushing for 94 more yards.

#13 Auburn blows out #24 Mississippi State for 49-10 win
Aren't these two teams trending in opposite directions?

Auburn looked as dominant as they have all season, racking up over 500 yards of total offense and completing shutting down a Mississippi State team that is now reeling.

Looks like the rout could be on in Auburn. Stidham hits a WIDE open Hastings to put @AuburnFootball up 21-3! #MSSTvsAUB pic.twitter.com/JgaRynqjte

Running back Kerryon Johnson led the way for the Tigers with 116 yards and three touchdowns on 23 carries in the game, while quarterback Jarrett Stidham passed for 264 yards and two touchdowns.

Upset alert
Troy shocks #25 LSU with 24-21 win
The biggest upset of the day was not as close as the final score indicated. Led by a dominant defensive performance, Troy scored the first 17 points of the game and led 24-7 in the fourth quarter.

Tigers were driving until Blace Brown stripped the ball on this 3rd-down play! pic.twitter.com/1dBUAwJyJS

Anderson takes it in to push Troy's lead to 24-7 on this carry! #RTW pic.twitter.com/G68TJh2UDO

LSU tried to rally in the closing minutes, but quarterback Danny Etling threw an interception on the final drive and sealed a win for the Trojans.

Butch Jones is on the hottest seat in the country
Time is running out on Butch Jones. Following Tennessee's humiliating 41-0 home loss to Georgia, it's looking like the Vols could be making a change sooner rather than later.

Jones improved his record each of his first three years in Knoxville before sticking at nine wins last season. They fell short of their SEC East goals in 2015 and 2016, and their disappointing start this season certainly signals that Jones is not the guy who can get this program over that hump moving forward.

It's at the point now where it doesn't feel like Jones can endure another disappointing loss. The Vols have a bye before starting a tough string of games against South Carolina, Alabama and Kentucky.

Performance of the day
BRYCE LOVE! Love really solidified himself as a Heisman contender today, rushing for a Stanford-record 301 yards and three touchdowns on just 25 carries.

Heisman update
Love may have put himself in the mix, but Saquon Barkley solidified himself as the Heisman frontrunner with his performance today (222 total yards, KO return TD, pass TD), capitalizing on Baker Mayfield and Oklahoma's bye week.

Those three players are clearly the top contenders, but a number of players are lurking on the fringes, including Washington State quarterback Luke Falk and San Diego State running back Rashaad Penny.

Right now, here are the top three, along with their season stats so far:

Top plays
These are the top plays of the day that were not included in any of the recaps above:

Only thing better than one long TD run for Josh Adams? How about TWO! #MIAvsND pic.twitter.com/BbT0Bif1fq

Oh yea, Saquon Barkley can also THROW for a TD too! Should we just give him the Heisman now?? #INDvsPSU pic.twitter.com/A6zCQ4U8y3